We got our hands on the Redmi 11 Prime 5G, one of the cheapest 5G phones on the market, and tested it for a week to find out everything about it. 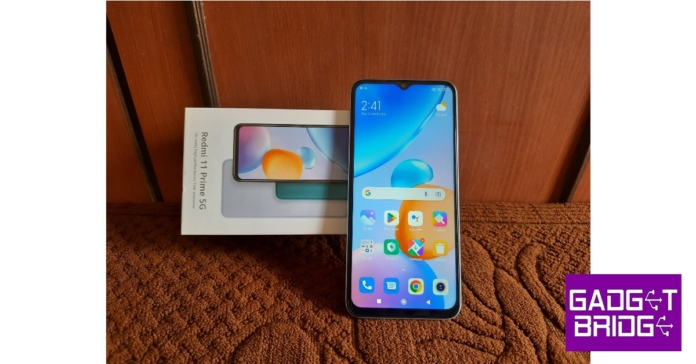 As India inches closer to the 5G rollout, the budget smartphone category is finally seeing some activity as an increasing number of smartphones with 5G connectivity are being made available to consumers. Xiaomi, with its Redmi line of smartphones, has consistently put out spec-heavy phones at prices that are quite appealing to the average smartphone buyer. Now that consumers are looking to make the switch to a 5G smartphone, the recently launched Redmi 11 Prime 5G is already one of the most affordable 5G smartphones, priced at Rs 13,999. We used the Redmi 11 Prime 5G for a week and put it through a series of tests, here is our review.

For this review, we used a 6GB + 128GB Chrome Silver variant of the Redmi 11 Prime, which is currently priced at Rs 14,999. The smartphone comes with a 22.5W charger and a clear back cover for the phone. You’ll also find a quick start guide and a sim ejector pin inside the box. 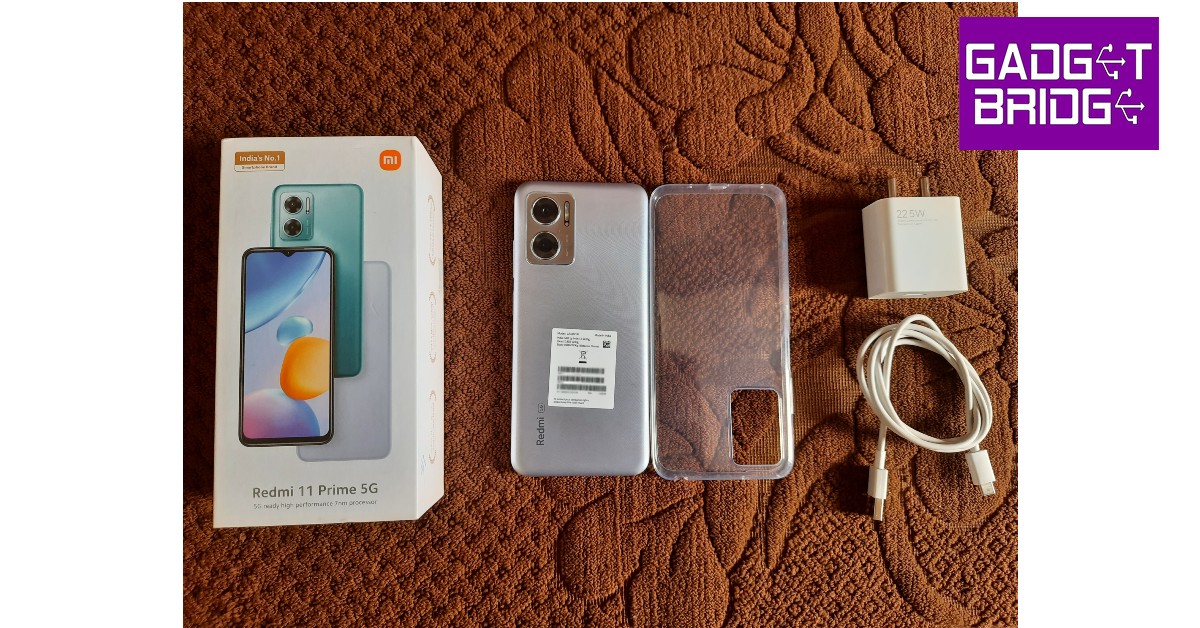 With dimensions of 164×74.1×8.9mm, the Redmi 11 Prime is not a compact phone by any means. The main material used here is plastic, but the textured design of the back gives it a better feel while holding, and is slightly more premium than an ordinary smooth back. Apart from the feel, it provides a better grip and does not attract any fingerprints.

The dual camera lenses are housed in a glossy panel along with the LED flash. This camera unit resembles a cassette disk, giving the smartphone a fresh look that is nothing like its peers. The choice of a 2MP depth sensor is confusing, as the phone could’ve easily benefited from an ultrawide shooter. But that probably would have increased the cost of the smartphone. 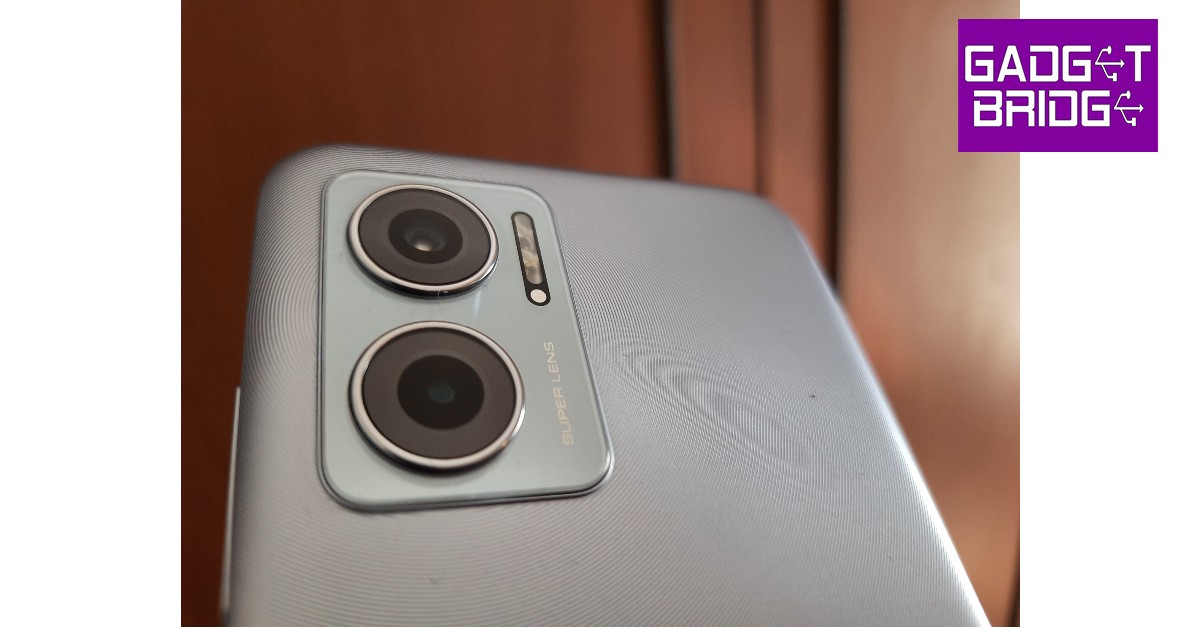 At the front, the Redmi 11 Prime sports a 6.58-inch IPS LCD display, with a dewdrop cutout for the front camera. The display has a Corning Gorilla Glass 3 finish, which is nice to see in a smartphone in this segment. Along the right side, you’ll find the volume rocker keys and the power button which also doubles up as a fingerprint scanner. 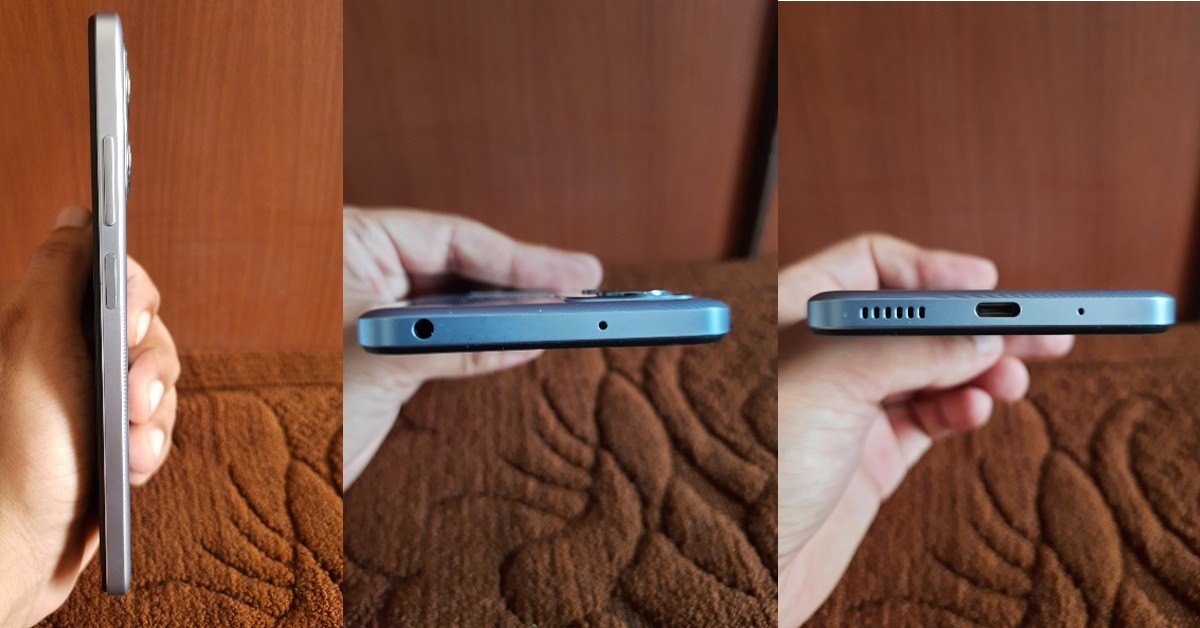 On the left, the SIM tray sits by itself. The microphone, USB Type-C port, and speaker grille are housed at the bottom, while the 3.5mm headphone jack and the IR blaster have been placed at the top of the phone. There is no secondary speaker on the Redmi 11 Prime, which is the norm in this price bracket.

Moving on, the 6.58-inch LCD display has a refresh rate of 90Hz and a screen-to-body ratio of 83.6%. The full HD+ display can play video content up to 1080p. The display, even though some would prefer AMOLED over LCD, is optimum for watching HD content on YouTube, Netflix, and other OTTs. The balance of colours is decent, and the images are sharp with a good amount of detail. 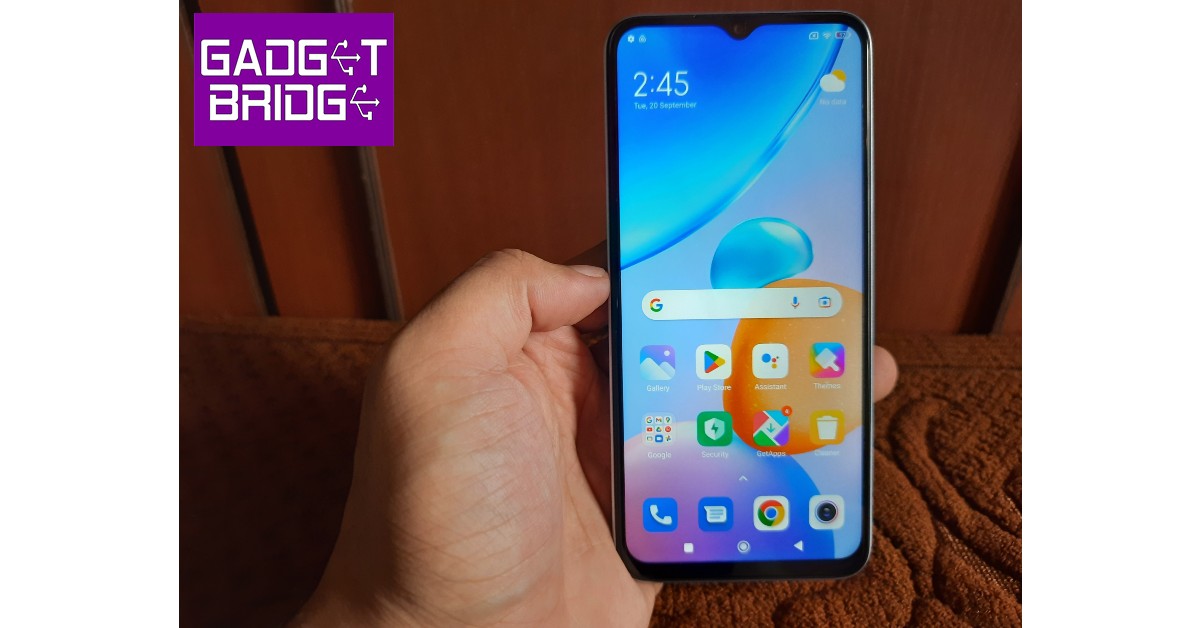 The loudspeaker, however, could have been better. The sound seems a bit muffled with very less attention paid to lower frequencies. The result is boxy, unclear sound output. You’ll want to put on your headphones when consuming media on this device.

While the video playback is satisfactory, the display could’ve done a lot better with its touch response rate. Scrolling on the phone is not a fluid experience at all, and while the display may have a 90Hz refresh rate, you need a good touch response to unlock its potential. For a phone that also caters to a gaming audience, this aspect needs to be sorted out. Hopefully, a future update can take care of this feature.

The peak brightness of the display is 400 nits, which works fine indoors, but in bright outdoor settings or directly under the sun, we found ourselves covering the screen to see the display clearly. The fingerprint scanner on the power button works decently, but you still have to press the button to unlock the phone.

The Redmi 11 Prime 5G comes with the Media Dimensity 700 chipset that produces a surprisingly good performance on the device. We used the 6GB + 128GB model for this review and did not experience any lags or slower speeds while running multiple apps in the background and carrying out several tasks at once. Switching between multiple active apps is easy and takes minimal load time. 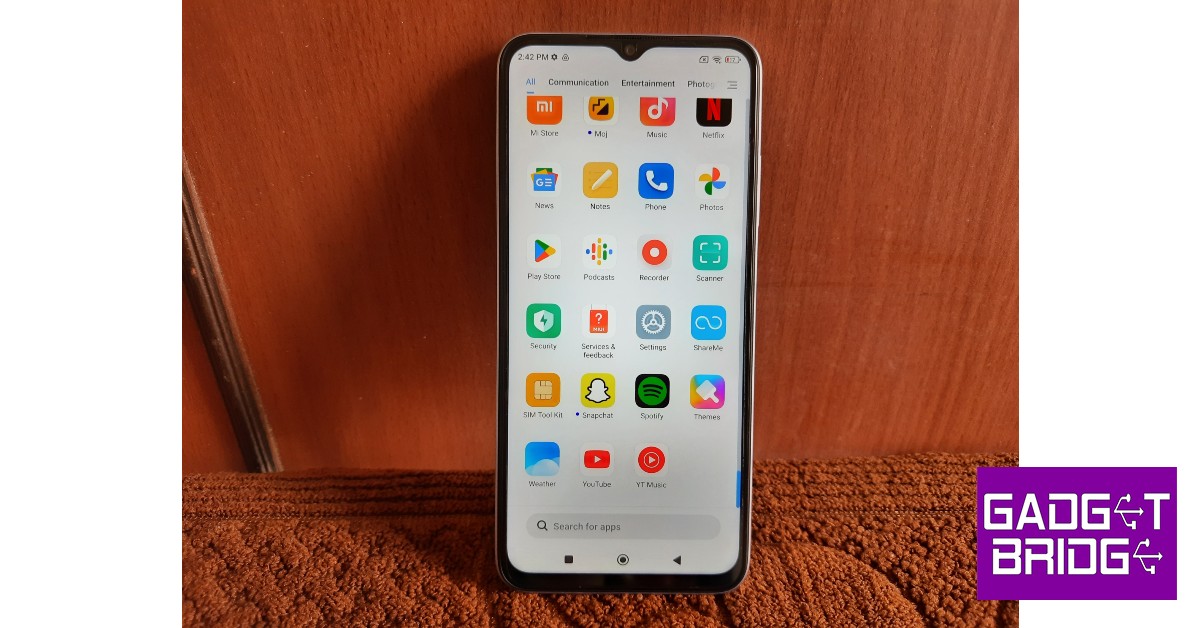 OS duties are handled by Android 12 skinned with MIUI 13. Xiaomi has not announced anything when it comes to future updates for this device, but it will get the Android 13 update at the very least. There are a lot of bloatware apps that come with the phone, but you won’t find any other smartphone in this segment that offers a clean software experience. Thankfully, the bloatware apps can be easily uninstalled from the app drawer itself.

We played Call of Duty Mobile on the Redmi 11 Prime, and the phone handled it quite well, offering smooth gameplay with no frame drops. The touch response is still an issue here and it takes away from the gaming experience quite a bit. It gets annoying when some touches fail to register on the gameplay. While connected to WiFi, the connection quality drops significantly if you’re at a distance from the router. 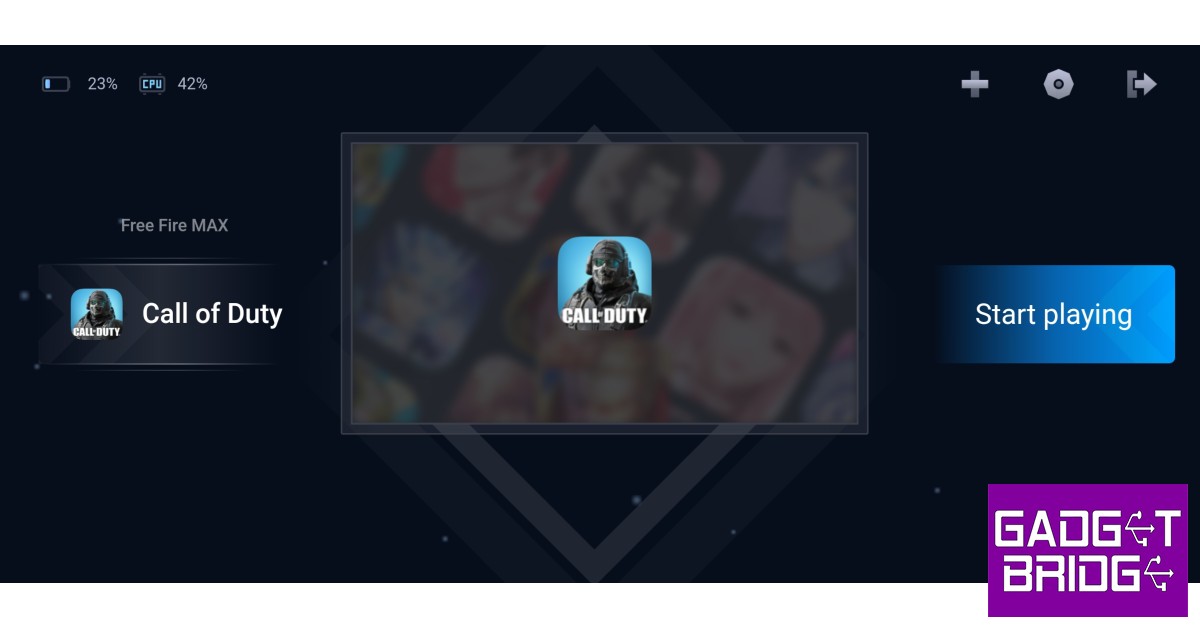 Gamers will also be interested in the ‘Game Turbo’ feature, which organises all the installed games in one place and offers advanced features like providing bandwidth priority to games running in the foreground, optimised touch controls, and several in-game shortcuts. You can also increase the touch sensitivity for individual games, which will slightly improve the gaming experience. 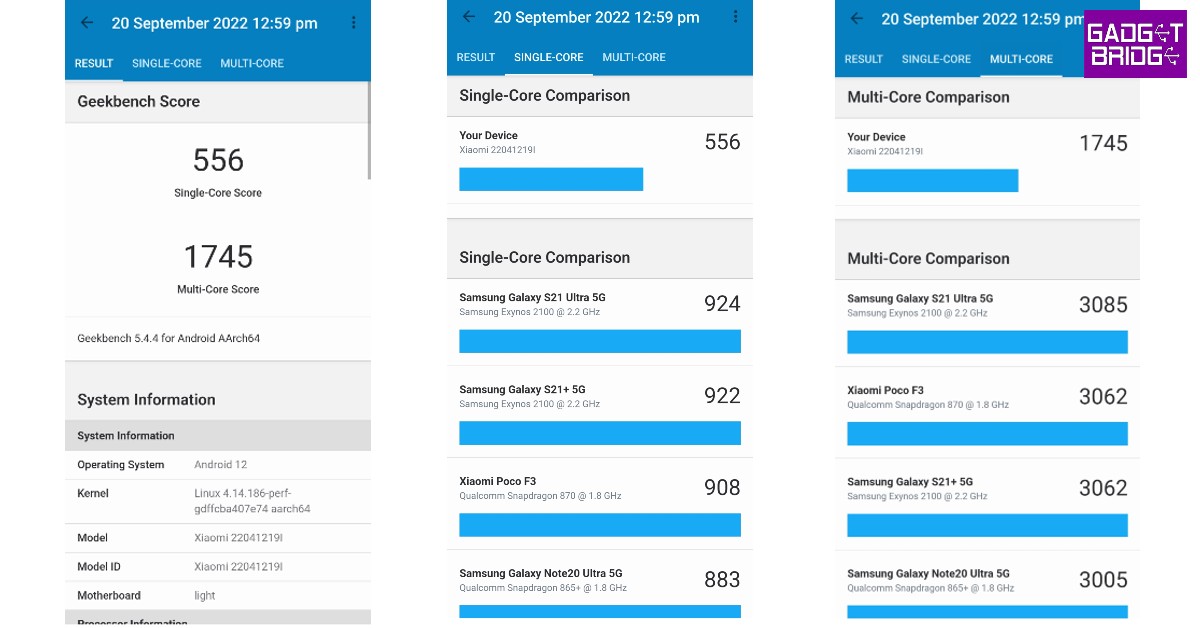 We ran the Geekbench 5 test on the Redmi 11 Prime, and it scored 556 points in the single-core test and 1,745 points in the multi-core test. A respectable score which places it with the likes of Xiaomi Poco X3 NFC, Xiaomi Redmi Note 8 Pro, and just behind Xiaomi Redmi K20 Pro.

The 5,000 mAh battery is another bright feature of the device. It performed really well and easily lasted an entire day with moderate to heavy use, which included an hour of gaming and another two hours of watching videos along with a decent duration of social media use. Even at the end of the day, the phone was left with a 30-40% charge. This itself is good enough to last at least half a day more. With more conservative use, the phone can last almost two days. There is a 22.5W charger provided inside the box, but the smartphone charges at 18W speed, taking a little under 2 hours to go from 0-100%.

The rear camera produces great results in an outdoor setting with optimum lighting. The colours were composed, albeit on the slightly dull side. A lot of the smartphones in this category tend to shoot up the contrast without paying attention to the smaller details. But the 50MP primary lens here manages to capture a good amount of detail in an outdoor setting. The resulting images are quite life-like and are able to retain a decent colour profile.

The 2MP depth sensor puts in a shift while the camera is in Portrait Mode. There is no dramatic background blur, but the subject is captured in great detail and the colours produced are vibrant and dynamic. We’d still have preferred an ultrawide lens, but the depth sensor does what is asked of it.

The quality of images drops down significantly in low lighting. We took the camera out to take a few photographs at sunset, and the pictures did not amaze us. The dusk sky is captured in a good amount of detail, but no attention is paid to the foreground. Night-time photography is also not that great, with the pictures turning out to be extremely grainy, and filled with a lot of noise. But hey, coming to think of it, that is the case with almost every other budget segment smartphone. Our advice as always, use the LED flash to get the best results at night.

The 8MP selfie camera takes decent quality images but alters skin tone by adding a brightening effect, something that could have been left out or maybe given as another feature. Both front and rear cameras can record 1080p videos at 30 fps.

The Redmi 11 Prime 5G fits the profile of a performance-oriented affordable 5G device. It has something in it for everyone – casual users will be satisfied with the decent camera performance and versatile battery, while the MediaTek Dimensity 700 chipset and 90Hz display refresh rate will surely appeal to gamers. While the phone impresses on several fronts, the overall experience could have improved vastly with a more fluid touch response. With the 5G rollout to commence soon, the Redmi 11 Prime 5G is still one of the better phones you can buy at Rs 13,999.

Touch response not up to the mark

The audio output could’ve been better

- Advertisment -
As India inches closer to the 5G rollout, the budget smartphone category is finally seeing some activity as an increasing number of smartphones with 5G connectivity are being made available to consumers. Xiaomi, with its Redmi line of smartphones, has consistently put out spec-heavy...Redmi 11 Prime 5G Review: 5G Connectivity At An Affordable Price