An upgraded variant of the Samsung Galaxy M30 spotted on Geekbench, is powered by a stronger CPU

The smartphone might come with a name - Samsung Galaxy M30s.

The benchmarking platform also revealed that the device will run on Android 9 Pie. This is definitely an upgrade from the Samsung Galaxy M30 that was launched with Android 8.1 Oreo. 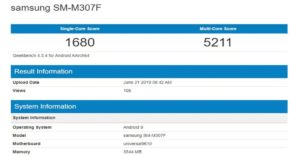 Aman Singhhttps://www.gadgetbridge.com/
Aman Kumar Singh has a Masters in Journalism and Mass Communication. He is a journalist, a photographer, a writer, a gamer, a movie addict and has a love for reading (everything). It’s his love of reading that has brought him knowledge in various fields including technology and gadgets. Talking about which, he loves to tweak and play with gadgets, new and old. And when he finds time, if he finds time, he can be seen playing video games or taking a new gadget for a test run.
Facebook
Twitter
WhatsApp
Linkedin
ReddIt
Email
Previous article
OnePlus TV launch “might be soon”: Report
Next article
Microsoft co-founder Bill Gates has admitted his ‘greatest mistake’