This will enable Facebook users to know if the news articles they are about to share are more than 90 days old. 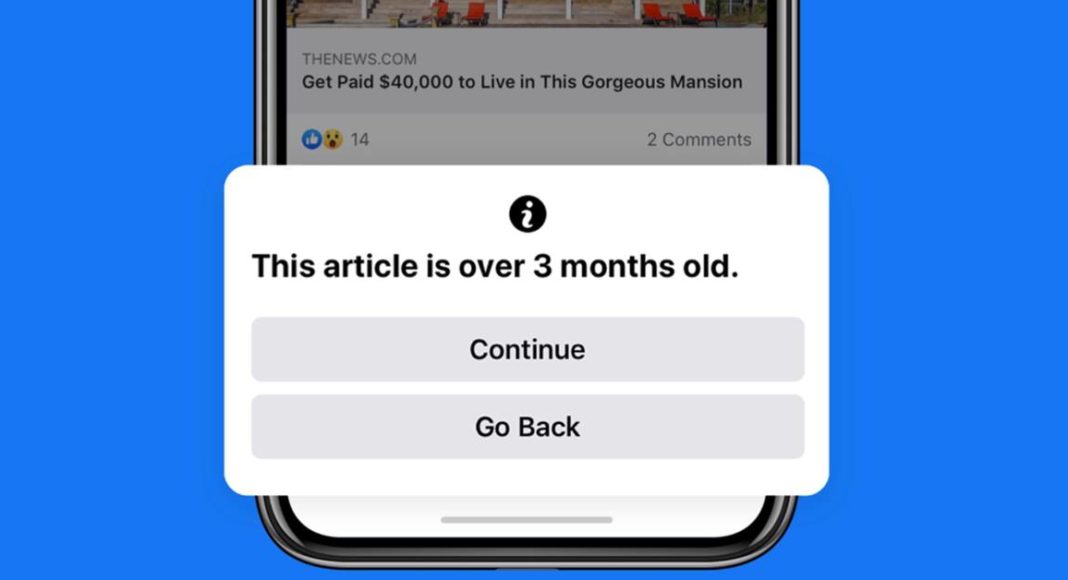 When it comes to watching news, all of us want to watch something that is timely and credible. In 2018, Facebook had introduced added the context button that provided information about the sources of articles in News Feed. Now, it has rolled out a notification screen across the globe that will enable Facebook users know if the news articles they are about to share are more than 90 days old.

In order to ensure people have the context they need to make informed decisions about what to share on Facebook, John Hegeman, VP Feed and Stories, said, “The notification screen will appear when people click the share button on articles older than 90 days, but will allow people to continue sharing if they decide an article is still relevant.”

“Over the past several months, our internal research found that the timeliness of an article is an important piece of context that helps people decide what to read, trust and share. News publishers in particular have expressed concerns about older stories being shared on social media as current news, which can misconstrue the state of current events,” added Hegeman.

According to a Facebook blog post, some news publishers have already taken steps to address this issue on their own websites by prominently labelling older articles to prevent outdated news from being used in misleading ways.

Facebook further added that it will also test other uses of notification screens over the next few months. For posts with links mentioning COVID-19, the social-networking giant is exploring using a similar notification screen that provides information about the source of the link and directs people to the COVID-19 Information Centre for authoritative health information. Through providing more context, Facebook’s goal is to make it easier for people to identify content that’s timely, reliable and most valuable to them.

Earlier, the Mark Zuckerberg-owned social networking giant has executed its plan to label media outlets that are wholly or partially under the editorial control of their respective government.

In an official blog post, Nathaniel Gleicher, Head of Cybersecurity Policy at Facebook, said, “We’re providing greater transparency into these publishers because they combine the influence of a media organization with the strategic backing of a state, and we believe people should know if the news they read is coming from a publication that may be under the influence of a government.”

Moreover, Facebook will also start labelling ads from state-controlled media outlets later this year to ensure the users that it’s equally transparent when it comes to paid content. “State-controlled media outlets rarely advertise in the US. Nevertheless, later this summer we will begin blocking ads from these outlets in the US out of an abundance of caution to provide an extra layer of protection against various types of foreign influence in the public debate ahead of the November 2020 election in the US,” the social-networking giant added.