Both smartphones will be powered by Google Tensor G2 SoC. 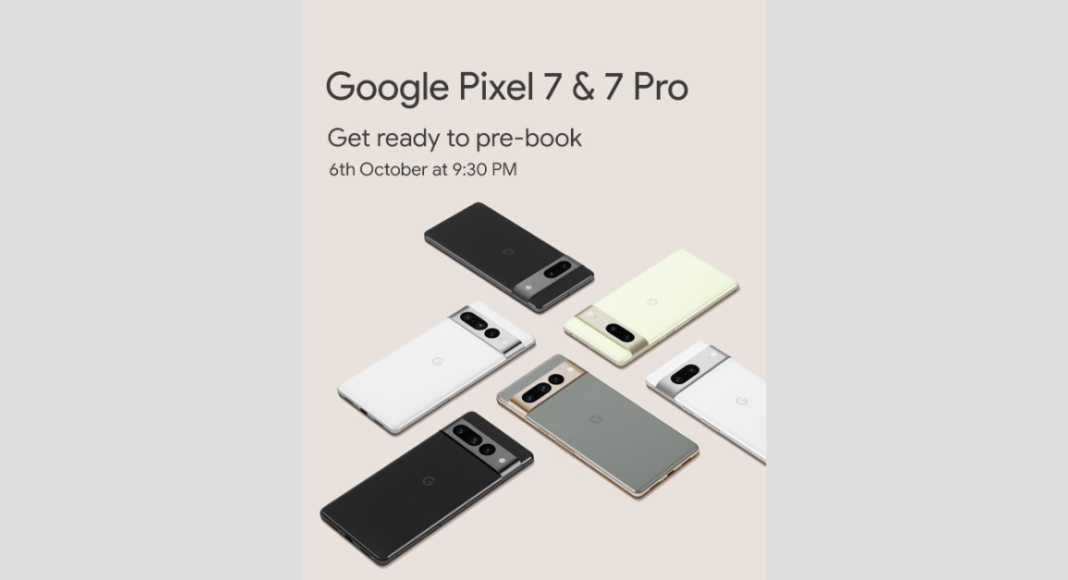 Google has officially confirmed that pre-orders for its next flagship Pixel 7 series would open in India on October 6. It is the same day the firm would hold its “Made by Google” event to introduce the Pixel 7 and Pixel 7 Pro. The Pixel 7 series will arrive with the newest Google Tensor G2 SoC, which has already been verified.

Google took to Twitter to announce that Flipkart will begin accepting pre-orders for the Pixel 7 and Pixel 7 Pro in India on October 6. The sale will begin at 9:30 PM on the same day the phone gets launched. The price and first selling date, however, are still unknown. To recall, Google Pixel 3 and Pixel 3XL were the last high-end smartphones to officially debut in India before these. Following the release of the Pixel 4a in the country a few years ago, the firm has since been introducing models in the A series. Most recently, the company unveiled the Pixel 6a.

Google may price the Pixel 7 line of smartphones at roughly the same level as the Pixel 6 portfolio. These rumours have been confirmed by a stolen Amazon listing that showed a $599 basic Pixel 7 model that translates to Rs 50,000. If these rumours are accurate, the Pixel 7 Pro could cost as much as $899 which converts to Rs 75,000.

Along with the Nest range of smart home goods, the Pixel 7 and Pixel 7 Pro smartphones, the company will also debut the Google Pixel Watch.

The Google Tensor G2 CPU will also be used to power the Pixel 7 series, which has already been confirmed. Additionally, these smartphones will come pre-installed with Android 13. According to the website, the new OS would give images, movies, security, and speech recognition personalised capabilities.

Komila Singhhttp://www.gadgetbridge.com
Komila is one of the most spirited tech writers at Gadget Bridge. Always up for a new challenge, she is an expert at dissecting technology and getting to its core. She loves to tinker with new mobile phones, tablets and headphones.
Facebook
Twitter
WhatsApp
Linkedin
ReddIt
Email
Previous article
Garena Free Fire Redeem Codes Today 3 October 2022: Here is how to claim them
Next article
How to get the most out of Samsung Galaxy Z Flip 4’s cover screen