Launching today: Moto G52 is all set to make its debut in India today

The device will be available for purchase via Flipkart in the country. 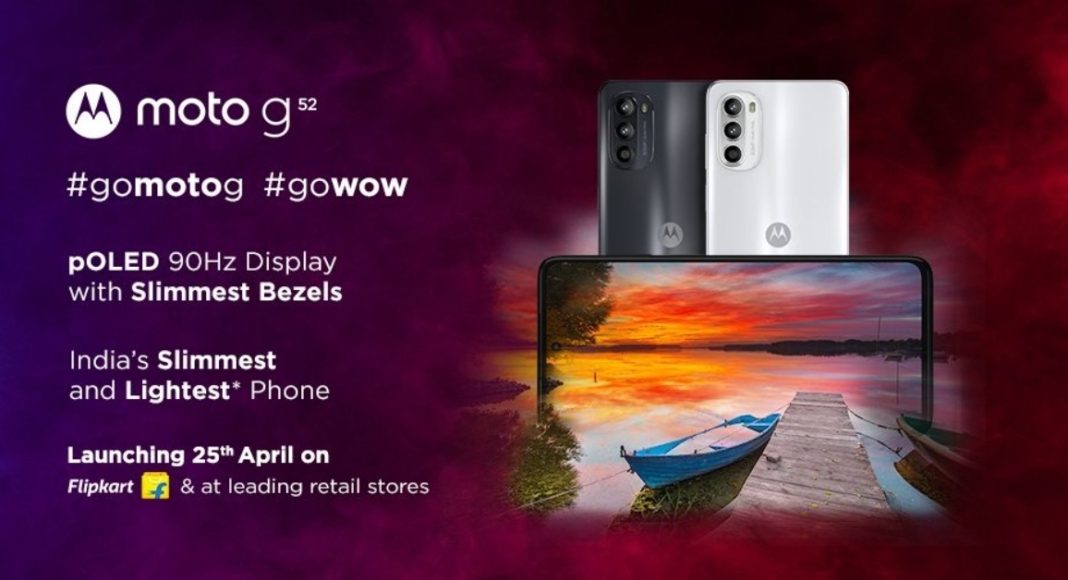 Motorola is preparing to launch its Moto G52  smartphone in India. Earlier this month, the device was introduced to the European market. A hole-punch display with a refresh rate of 90Hz will be included with the phone. It is powered by Qualcomm’s Snapdragon 680 SoC. Flipkart will also be the official retailer for the Moto G52. Continue reading to learn more about the launch.

Motorola, a Lenovo-owned company, will launch the Moto G52 in India at 12 p.m. today. The company also announced that the device will be available for purchase starting today on the e-commerce website Flipkart. The company has not yet revealed the price of the upcoming device, but it is expected to be comparable to that of the European market. The Moto G52 was released in Europe, in case you forgot. The single 4GB RAM with 128GB storage option was priced at EUR 249, which translates to Rs 20,600 in India. Charcoal Grey and Porcelain White are the two colour options for the smartphone.

The Moto G52’s specifications in India are likely to be similar to those in Europe. According to the Flipkart listing, the Moto G52 will have a full-HD+ pOLED display with a 90Hz refresh rate. A fingerprint sensor is also visible on the phone’s side, according to the microsite.

The Moto G52 is available in Europe and features a 6.6-inch full-HD+ display with a resolution of 1,0802,400 pixels and a refresh rate of 90Hz. The device is equipped with a Qualcomm Snapdragon 680 SoC, an Adreno 610 GPU, and 4GB of RAM, as well as 128GB of internal storage that can be expanded up to 1TB using a microSD card.

The phone has a triple-camera setup on the back, with a 50-megapixel primary sensor in the middle. The camera unit also includes an 8-megapixel ultra-wide-angle depth sensor and a 2-megapixel macro sensor. For selfies and video chats, the Moto G52 has a 16-megapixel front-facing camera.

The Moto G52 comes with a 5,000mAh battery and a 30W TurboPower Charging charger.

Komila Singhhttp://www.gadgetbridge.com
Komila is one of the most spirited tech writers at Gadget Bridge. Always up for a new challenge, she is an expert at dissecting technology and getting to its core. She loves to tinker with new mobile phones, tablets and headphones.
Facebook
Twitter
WhatsApp
Linkedin
ReddIt
Email
Previous article
Garena Free Fire Redeem Codes for 25 April: Here is how to claim them
Next article
In conversation: Pallavi Singh, Vice President, SPPL tells us what drives Westinghouse to India