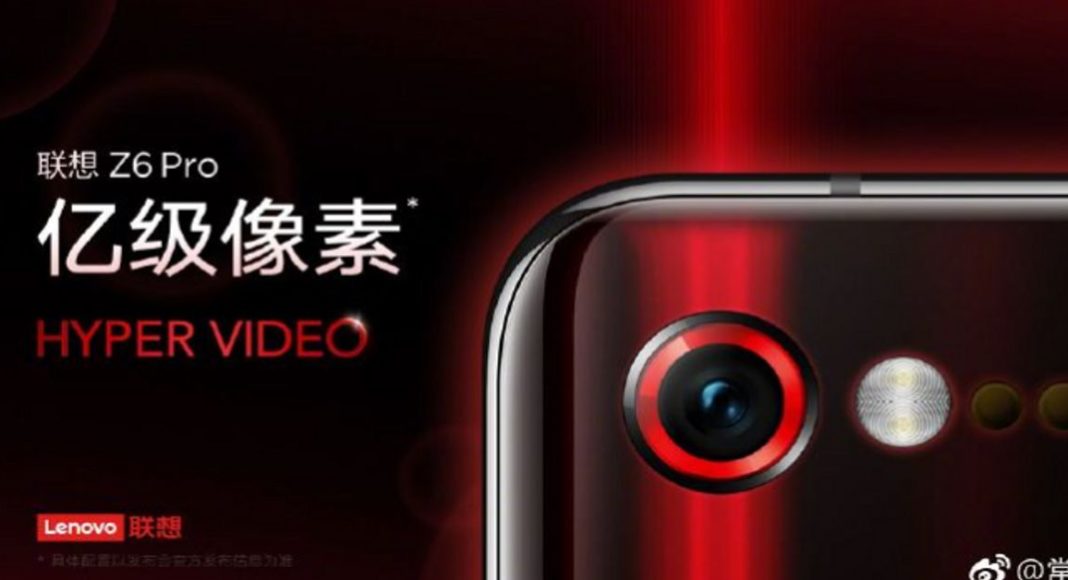 Chinese smartphone brand Lenovo has been teasing its Lenovo Z6 Pro flagship smartphone for quite some time now. The Lenovo Z6 Pro is the successor of the 2018 Lenovo Z5 Pro GT which came with 12GB of RAM and 512GB of internal storage. The company has announced that the device will be launching on June 2019.

And now, a revelation has been made by the company’s VP Chang Cheng that the Lenovo Z6 Pro’s might be able to capture and produce 100-megapixels images. The image was teased on the Chinese social networking platform Weibo. The VP had posted about the Lenovo Z6 Pro on Weibo using a Chinese hashtag which means ‘a billion pixels’, or 100-megapixels (also means 100 million pixels in some cases.

The news comes after Qualcomm’s announcement about its processors already possessing the capability of supporting images of more than 100-megapixels. But is should be noted that making a 100-megapixels image would require the smartphone camera to capture and combine multiple shots of a single frame and bring them together into making one large picture.

It is also expected that the Lenovo Z6 Pro will come with 5G support. But the company might also launch a non-5G variant of the device similar to the Samsung Galaxy S10 series.

As the company’s VP Cheng had teased on Weibo about the Lenovo Z6 Pro having a HyperVision camera it can be speculated that the device’s camera will be its main feature. And the second teaser from the VP proves that point. Cheng’s post on Weibo was spotted by IT Home and the post reveals the Lenovo Z6 Pro’s Hyper Video feature. Cheng has used the hashtag which translates into ‘billion level pixels’, meaning the device will be able to produce larger images. Cheng had also posted a video teasing the Lenovo Z6 Pro’s hyper video and super macro capabilities on his Weibo account.

But there is a possibility that the Lenovo Z6 Pro might not have the features the VP is teasing about so the news should be taken with a pinch of salt. For now, we will have to wait for the launch of the device to see what features and capabilities the Lenovo Z6 Pro possess.

Aman Singhhttps://www.gadgetbridge.com/
Aman Kumar Singh has a Masters in Journalism and Mass Communication. He is a journalist, a photographer, a writer, a gamer, a movie addict and has a love for reading (everything). It’s his love of reading that has brought him knowledge in various fields including technology and gadgets. Talking about which, he loves to tweak and play with gadgets, new and old. And when he finds time, if he finds time, he can be seen playing video games or taking a new gadget for a test run.
Facebook
Twitter
WhatsApp
Linkedin
ReddIt
Email
Previous article
Microsoft will not be playing pranks on you this April Fools’ Day
Next article
Xiaomi shares a video of its double-folding smartphone