Moto G 5G launching today: Here is what you can expect

The device is claimed to be India's most affordable 5G smartphone 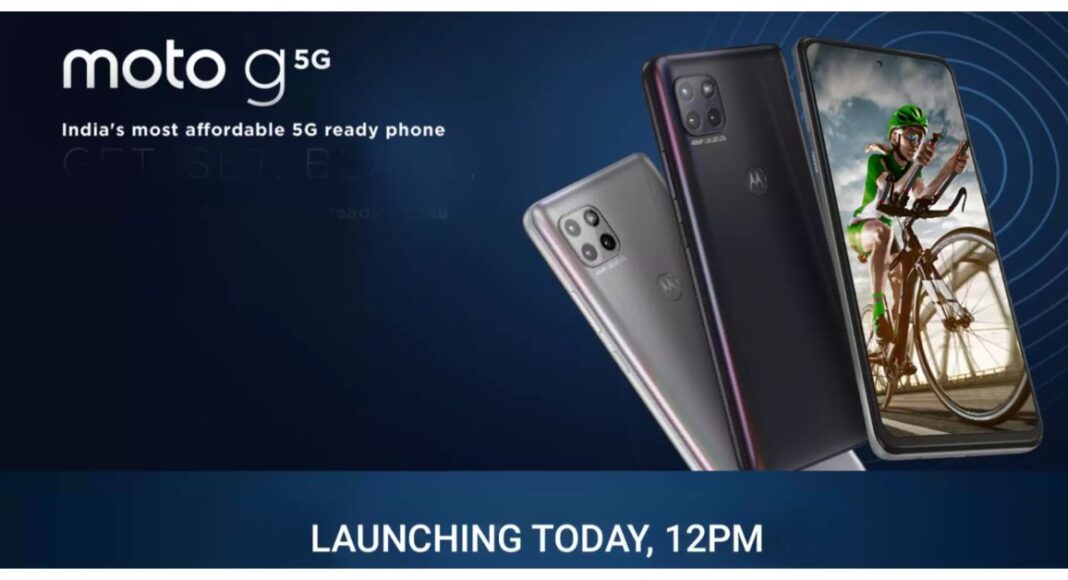 Motorola is all geared up to launch its latest smartphone Moto G 5G in India. The device has already been launched in the European market earlier this month. Also, Flipkart is going to be the official sales partner for Moto G 5G and is tipped to be “India’s most affordable 5G smartphone.” Read on to know more about the launch details.

Today the Lenovo-owned company Motorola is going to raise the curtains off from Moto G 5G in India at 12 noon onwards. The company has also revealed that the device will go on sale via e-commerce website Flipkart from today onwards. However, the company has not yet revealed the pricing of the upcoming device however it is expected to be similar to the European market. In Germany, the price of the smartphone is set at EUR 299.99 that translates to Rs 26,200. The phone is likely to be available in two colour options Volcanic Grey and Frosted Silver. The Flipkart listing also reveals that the phone will also be offered in a 6GB of RAM with 128GB of storage options

Moto G 5G comes with a 6.7-inch full-HD+ LTPS display with 1,080×2,400 pixels of resolution and 394ppi pixel density. The device runs Android 10. Under the hood there is a Qualcomm Snapdragon 750G processor coupled with 4GB of RAM with 64GB of storage. The internal storage can be expanded up to 1TB using a microSD card.

The Moto G 5G houses a 5,000mAh battery with 20W TurboPower fast charging support and is claimed to last up to 2 days on a single charge. As a connectivity option, there is 5G, NFC, Bluetooth 5.1, Wi-Fi 802.11ac, USB Type-C port, GPS among others. Moreover, it has a rear-mounted fingerprint sensor placed inside the Motorola batwing logo.

Komila Singhhttp://www.gadgetbridge.com
Komila is one of the most spirited tech writers at Gadget Bridge. Always up for a new challenge, she is an expert at dissecting technology and getting to its core. She loves to tinker with new mobile phones, tablets and headphones.
Facebook
Twitter
WhatsApp
Linkedin
ReddIt
Email
Previous article
November 30 Amazon Quiz Answers: Today you can win Rs 15,000 Amazon Pay Balance
Next article
Vivo V20 Pro India launch set for December 2