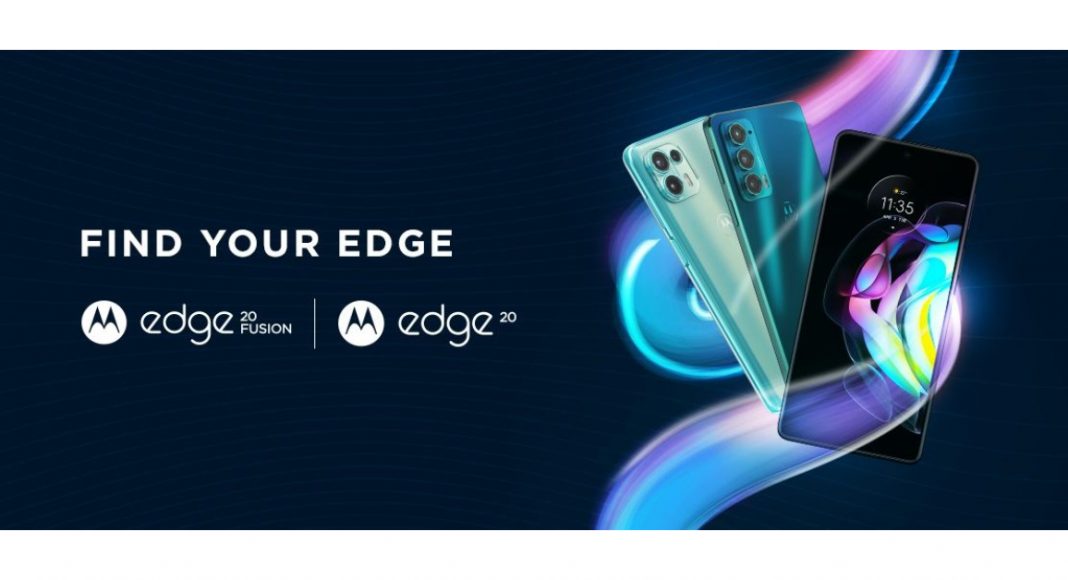 The Chinese smartphone company, Motorola, is all set to launch a new smartphone in India. Recently, the company introduced its Motorola Edge 20 Series in the European market and now the company has begun teasing the lineup for the Indian market. The company’s new flagship series is set to hit the Indian shores soon.

Motorola India has released some of the teasers on its social media channels including Twitter and Instagram with the hashtag #FindYourEdge hinted that its “Edge 20” series is coming soon for Indian users. The line already includes three devices Edge 20, Edge 20 Lite and Edge 20 Pro. However, the company has only confirmed to launch a standard variant and Motorola Edge 20 Fusion. We are already aware of the technical specs of the vanilla Edge 20 but the details regarding the Fusion version are still unclear as it will make its debut in India only.

Speaking of the specifications the vanilla Motorola Edge 20 will come with a 6.7-inch OLED display with 144Hz refresh rate support. In addition to this, it will also include 10-bit colour, DCI-P3 colour space coverage, and HDR10+ certification.  It is powered by Qualcomm Snapdragon 778 5G SoC and comes with up to 8GB of RAM and up to 256GB of storage.

In terms of optics, there will be a triple rear camera setup that includes a 108-megapixel primary sensor, a 16-megapixel ultra-wide and macro lens, and an 8-megapixel telephoto lens with 3x high-res optical zoom and 30X Super Zoom. Upfront there is a  32-megapixel camera sensor for taking selfies and video calling. On the connectivity front, there is 5G, LTE, Wi-Fi 6, GPS, and Bluetooth and more. The device includes a 4,000mAh battery with support for TurboPower 30 fast charging

Motorola Edge 20 Fusion is tipped to be a rebadged variant of Motorola Edge 20 Lite. The company has designed the same models with different branding but for different markets. So if this information is to be believed then the handset will share all the specs similar to the Edge 20 Lite that includes a 6.7-inch OLED display. It may support a 90Hz refresh rate. Under the hood, it could include a  MediaTek Dimensity 720 SoC paired with 8GB RAM along with 128GB of storage. The device is expected to feature a triple rear camera set up that includes a 108-megapixel primary sensor, an 8-megapixel sensor with an ultra-wide-angle lens with Macro Vision, and a 2-megapixel depth sensor. It may also pack a 5,000mAh battery with 30W TurboPower fast charging support.

Komila Singhhttp://www.gadgetbridge.com
Komila is one of the most spirited tech writers at Gadget Bridge. Always up for a new challenge, she is an expert at dissecting technology and getting to its core. She loves to tinker with new mobile phones, tablets and headphones.
Facebook
Twitter
WhatsApp
Linkedin
ReddIt
Email
Previous article
Optoma HD30HDR projector review: What a wonderful view
Next article
Sony RS-XP700, SRS-XP500, SRS-XG500 Portable Bluetooth speakers launched in India