Both the smartphones will be available via Flipkart in the country 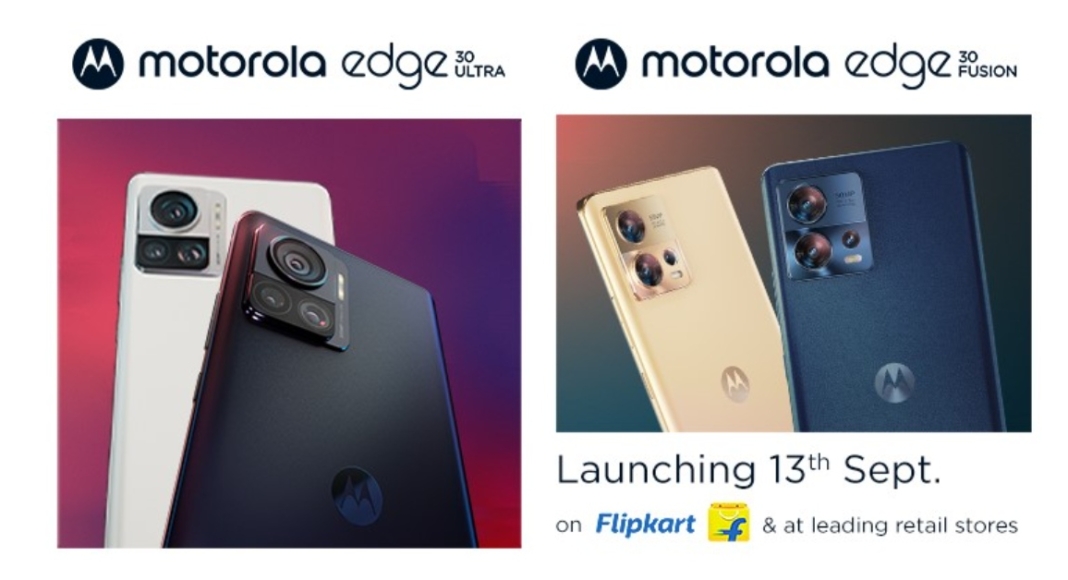 Motorola Edge Ultra 30 and Edge 30 Fusion are scheduled to launch in India on September 13. The company has revealed that both devices will be available for purchase via Flipkart. Prior to coming to India the smartphone was first introduced in a few markets so we are already aware of its specifications. The Ultra would feature a 200 MP triple back camera configuration. It will come equipped with a Qualcomm Snapdragon 8+ Gen 1 SoC with 12GB of LPDDR5 RAM.

The Motorola Edge 30 Ultra and Edge 30 Fusion will debut in India on September 13 according to the smartphone company’s Twitter announcement. The company has also stated that both phones will be sold in retail establishments like Flipkart.

Motorola Edge 30 Ultra features a full-HD+ 6.67-inch pOLED display with 1,080×2,400 pixels of resolution. The screen has a 144Hz refresh rate, HDR10+ compatibility, DCI-P3 colour gamut and a maximum brightness of 1,250 nits. . The device utilises the My UX user interface based on Android 12. A Qualcomm Snapdragon 8+ Gen 1 SoC, 8GB of LPDDR5 RAM, and 256GB of internal storage power the phone.

The Motorola Edge 30 Ultra has three rear cameras: a 12-megapixel telephoto lens with an f/1.6 aperture (with OIS), a 50-megapixel ultra-wide angle lens, and a 200-megapixel main sensor with an f/1.9 aperture. A 60-megapixel front-facing selfie camera with an f/2.2 aperture and quad pixel technology is included on the phone.

It has a 4,610mAh battery and supports cable charging at 125W TurboPower. The smartphone sports a USB Type-C port for charging and supports 5G, 4G LTE, Wi-Fi 6E, Bluetooth v5.2, GPS, and NFC for connectivity.

The 6.55-inch pOLED display on the Motorola Edge 30 Fusion has full-HD+ resolution. The screen has a 144Hz refresh rate, HDR10+ support and a 36-Hz touch sampling rate. Moreover, the display supports a maximum brightness of 1,100 nits, and a 20:9 aspect ratio.

It is equipped with an 8GB LPDDR5 RAM module and up to 128GB of internal UFS 3.1 storage and is powered by a Qualcomm Snapdragon 888+ SoC. A 50-megapixel primary sensor and a 13-megapixel ultra-wide angle lens are included in the phone’s dual rear camera configuration. A 32-megapixel selfie camera is included on the front.

It has connectivity options for Wi-Fi 6E, 5G, 4G LTE, NFC, and Bluetooth v5.2. A 4,400mAh battery and a USB Type-C connection are included in the Motorola Edge 30 Fusion. TurboPower rapid charging is also supported.

Komila Singhhttp://www.gadgetbridge.com
Komila is one of the most spirited tech writers at Gadget Bridge. Always up for a new challenge, she is an expert at dissecting technology and getting to its core. She loves to tinker with new mobile phones, tablets and headphones.
Facebook
Twitter
WhatsApp
Linkedin
ReddIt
Email
Previous articleGarena Free Fire Redeem Codes Today 12 September 2022: Here is how to claim them
Next articleBest Apps to download on your new iPhone 14 Pro and 14 Pro Max