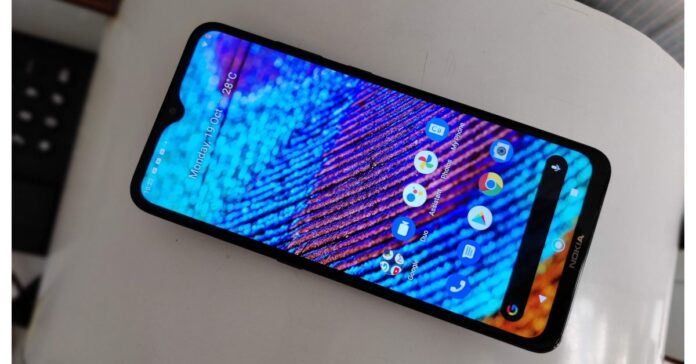 India’s smartphone budget market is dominated by Samsung, Xiaomi, Vivo and Oppo. In front of these giants, where does the Nokia 5.3 stands? Let’s find out in our extensive review.

Before we begin allow us to give you a rough guide on what the smartphone brings. The Nokia 5.3 device is a budget Android smartphone manufactured by HMD Global. It is a part of Android One programme and its price starts at Rs 13,999 in India. Here you will get a clean Android experience with up to two years of Android version updates and three years of security updates. The mobile comprises of a quad rear camera set up and an LCD display with a notch to house a selfie camera. So, to know, let’s find out how well does the smartphone perform and what else it has to offer to compete with other bands in the mid-range segment.

Starting with the design, we got the Charcoal colour variant to tinker with but as your liking, you can also go for Cyan or Sand colour options. Nokia 5.3 has a matte finish and to bring down the cost, the company has used this finish over the polycarbonate body, which also feels less bulky in the hand, does not attract smudges and is sturdy too. On the back, it has a circular module to house four cameras positioned around an LED Flash in the centre. Just below the camera set up, you have a rear-mounted fingerprint scanner, which is well placed and is quick to unlock the smartphone. However, it has another option as face unlock, which also works pretty well, too. The 3.5mm headphone jack is placed right on top of the phone. While down at the bottom it has a USB Type-C port for charging and two down-firing speakers grills as well. 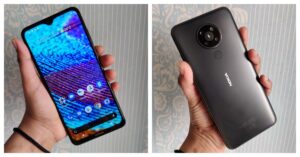 Speaking of the audio, the speakers are loud but cracks a bit as soon as you go for higher audio volume. The dual sim and microSD card slots are given at the left side of the phone and just below it, there is a dedicated Google Assistant button, which is a handy feature to have on this phone. One can also disable it from the settings menu in case you feel it is disturbing. On the right-hand side, Nokia 5.3 has a volume key button and a power button that doubles up as a LED notification light, We found this to be a very useful feature on the smartphone and it definitely draws your eyes to see it when you get a notification. 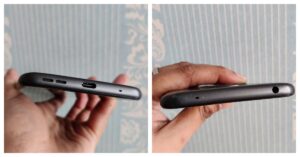 The overall design of the phone is simple and has a very minimalistic yet modern look. Moving on, the font of the Nokia 5.3 has a 6.55-inch HD+ (720×1,600 pixels) IPS LCD display with 20:9 aspect ratio along with a dewdrop notch on the top of the screen. The Side bezels are slim however it has a noticeable chin. If it was reduced a bit more we would have found it more appealing. 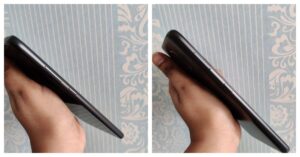 We got a bit uncomfortable knowing that Nokia 5.3 only includes an HD+panel but the IPS LCD display does its job well. Yes, it is not as sharp as the OLED panels but we did not see any pixelation while browsing the web or streaming videos on it. The brightness of the display is good enough to be used under direct sunlight. Moreover, colours on the phone looked quite natural, but as we said earlier it stands nowhere when compared with an OLED display as it lacks the contrast. Its dimensions are 164.3×76.6×8.5mm making the smartphone perfect in size – it isn’t too wide and not too tall, just the right fit for our hands.

Nokia 5.3 walks in with an octa-core Qualcomm Snapdragon 665 SoC, paired with 4GB or 6GB LPDDR4x RAM. In terms of storing content, the phone comes in a single 64GB storage option that is expandable via microSD card to up to 512GB. Gaming is not going to be a breeze on this smartphone as it is slightly dated chipset. The phone gets a bit drawn out during high paced gaming but no lag will be noticed while you play Call off duty even on very high frame rate and graphics. We have to mention that the phone heats up during long gaming hours. But hey, Nokia has not made it for the game hungry, but for the regular everyday power user. 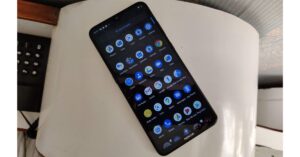 The USP of this phone is the Stock Android experience, which is clean and is free of any bloatware. Compared to Xiaomi’s custom skin with bloatware and ads, the Nokia 5.3 is a breath of fresh air. We just love the look of a clean stock Android OS that sets it apart from Samsung and Xiaomi phones. This smartphone is one of the very few phones, which is a part of Android One programme and guarantees two years of software updates and three years of security updates as well. Browsing social media and performing everyday tasks on the phone is buttery smooth. Sometimes we did notice that the app took a tad bit time to load, but nothing that can be taken as negative in this segment.

In terms of the cameras on Nokia 5.3, it features a quad-camera setup at the back of the phone. This includes a 13-megapixel primary lens, a 5-megapixel secondary ultra-wide-angle lens, a 2-megapixel depth sensor, and another 2-megapixel macro lens. On the front, there is an 8-megapixel selfie camera. 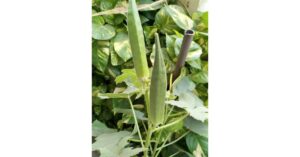 Frankly speaking, we found that the cameras on the phone are average. In bright light, you would be able to capture decent (normal as well as ultra-wide-angle) images. Some images show low dynamic range and contrast when shot with a wider field of view. The portrait images on the other hand are slightly better. The subject seems vibrant, edge detection is better and the bokeh effect is good as well. 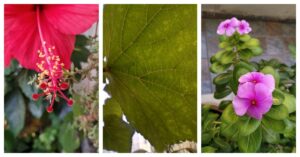 Also, Nokia 5.3 has a dedicated night mode that will enhance the image quality, however, it took too long to click and process images in this mode. So we recommend you either keep your hand steady for a bit or use the flash with the night shot. We got mixed results from the macro sensor. While some shots were really putting off, some were outstanding. 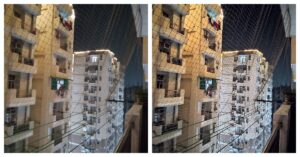 Coming to the front camera the 8-megapixel selfie sensor is, however, good but it seems to lack vibrancy in the images. As far as portrait images are concerned the edge detection isn’t perfect and the selfies lacked sharpness as well as vividness.

As for the videos, there is no stabilisation on (both) the rear as well as the front camera sensors. As a final point, the cameras on the Nokia 5.3 are average and if cameras are your priority, Then you might want to check Redmi or Galaxy M series.

In terms of the battery, the phone is backed by a 4,000mAH battery. It delivers a good all-day battery life. But it needs to be put on charge before you go to sleep for the next day. The device is shipped with a 10W charger, which manages to charge it to 30 per cent in an hour and to completely charge, it took more than two and a half hours so you cannot expect fast charging on this phone.

If you are on a tight budget and are looking for a non-Chinese phone, which is good at multitasking, has a decent battery life and Stock Android experience then you can go for the Nokia 5.3. For gaming and great cameras, you might need to check out other options.

Should have included better chipset

- Advertisment -
India’s smartphone budget market is dominated by Samsung, Xiaomi, Vivo and Oppo. In front of these giants, where does the Nokia 5.3 stands? Let's find out in our extensive review. Before we begin allow us to give you a rough guide on what the smartphone...Nokia 5.3 Review: Good battery life and stock Android experience