All the devices have been streamlined into three distinct lines. 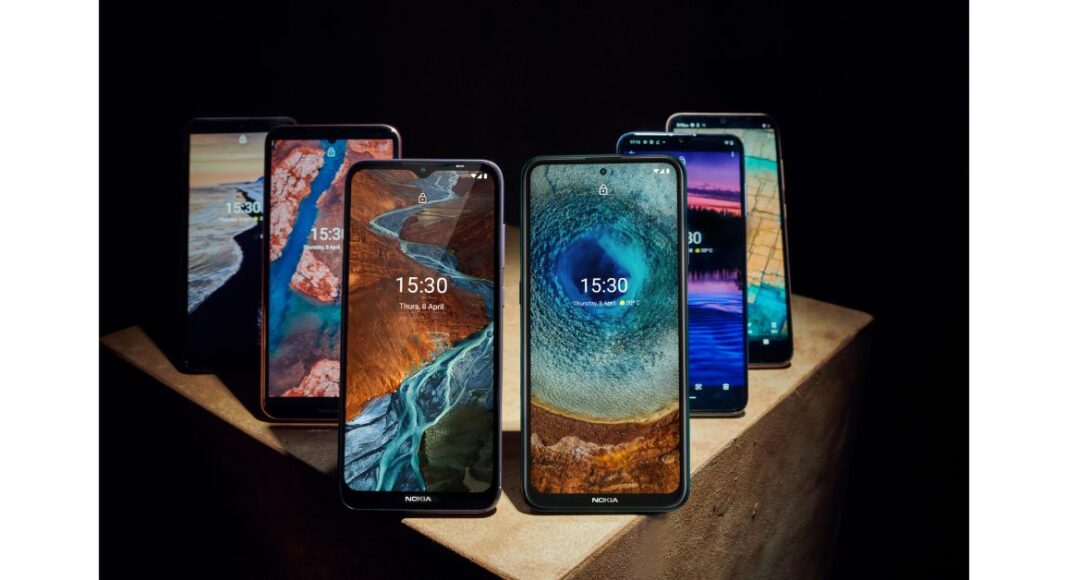 Starting with Nokia X20, this phone features a 6.67-inch FHD+ punch-hole display with 1,080 x 2,400 pixels of resolution and 450nits of peak brightness. The device runs Android 11 and guarantees up to three years of OS and security upgrades. The smartphone is powered by Qualcomm Snapdragon 480 SoC paired with up to 8GB of RAM with 128GB of storage options that can be expanded up to 512GB using a microSD card.

For the photos and videos, Nokia X20 comes with a quad rear camera set up powered by ZEISS optics. This includes a 64MP primary lens, a 5MP ultra-wide sensor, a 2MO depth and a 2MP macro lens. While on the front there is a 32MP selfie camera.

On the other hand, the Nokia X10 also bears a similar display and is powered by the same chipset with Android 11 running out of the box. The only difference here is that it has a low-resolution camera set up that includes a 48MP primary lens, a 5MP ultra-wide, a 2MO depth and a 2MP macro lens. Upfront, there is an 8MP selfie camera.

Nokia C10 runs Android 11 Go edition and will fetch two years of quarterly security updates. The phone comes with a 6.51-inch” HD+ V-notch display with 720 x 1,600 pixels of resolution. It offers a 20:9 aspect ratio and a peak brightness of 400 nits. The display has a protective layer of 2D Panda Glass. It is powered by an Unisoc SC7331e Quad-Core processor clocked at 1.3GHz paired with up to 2GB of RAM and 16GB of memory which can be expanded up to 256GB using a microSD card.

The device features a single 5MP rear camera and a 5MP sensor on the front. The Nokia C10 boasts a 3000mAh battery.

Whereas, Nokia C20 carries a 6.5-inch HD+ V-notch offering an aspect ratio of 20:9. This phone would also come with an Android 11 Go Edition out of the box along with 2 years of OS upgrades. Under the hood, there is an octa-core SC9863a processor paired with 1GB of RAM and up to 32GB of storage.

This Nokia mobile phone also comes with a single 5MP rear as well as a front camera with HDR support.

Both the phones have a removable 3,000mAh battery that can be charged through a Micro USB  (USB 2.0) port. For connectivity both the mobile handsets includes 802.11 b/g/n, Bluetooth 4.2,  GPS/AGPS,  Ambient light sensor, Proximity sensor and an Accelerometer (G-sensor).

The Nokia G10 smartphone features a 6.5-inch HD+ display with a V-notch and 20:9 aspect ratio. The phone runs Android 11 and is powered by Mediatek G25 SoC clocked at 2.0GHz. It will come with up to 4GB of RAM and 64GB of storage options. The device has a MicroSD card slot that supports up to 512GB of expandable storage.

In terms of imaging, the G10 sports a triple rear camera set up that includes a 13MP main sensor, a 2MP macro lens and a 2MP depth sensor. For taking selfies there is an 8MP front-facing camera.

The phone packs a 5,050mAh battery with 5V2A Charging support. In terms of connectivity, there is USB Type-C (USB 2.0) OTG, 3.5mm audio jack, 802.11 b/g/n, Bluetooth 5.0, GPS/AGPS + GLONASS + Beidou, Ambient light sensor,  Proximity sensor and an Accelerometer (G-sensor). The handset comes with a side-mounted fingerprint sensor along with a dedicated Google Assistant button and iPX2 rating for water and dust resistance.

On the other hand, Nokia G20 is powered by a Mediatek G35 processor paired with 4GB of RAM and up to 128GB of storage option. The G20 runs Android 11 out of the box. It comes with a similar 6.5-inch display. The phone features a quad rear camera set up that includes a 48MP with f/1.79 aperture. In addition to this, there is a 5MP ultra-wide-angle lens, a 2MP macro and a 2MP portrait lens. There is an 8MP front-facing camera on the phone for selfies with night mode and portrait mode support.

The battery is the same as above in addition to the connectivity options as well as sensors.

The Nokia X10 would come in three RAM and storage options of 6/64GB, 6/128 GB and 4/128GB. The phone will be available in select markets globally starting June.

Nokia G20 which comes in 4GB of RAM/64GB of storage and 4GB of RAM/128GB of storage options will also be available for purchase in select markets globally starting May in Night and Glacier colour options. The price of this smartphone will start at 159EUR approx. Rs 14,100.

Nokia G10 will be offered in two different configurations of 3/32GB and 4/64GB price starting at EUR 139 (roughly Rs 12,400). The phone can be purchased in select markets globally starting late April in Night and Dusk colour options.

The Nokia C20 and C10 are budget smartphones that would come in with up to 2GB of RAM and 32GB of storage options. The company is yet to reveal the pricing however you can buy the phone in Light Purple and Grey colour options.

Komila Singhhttp://www.gadgetbridge.com
Komila is one of the most spirited tech writers at Gadget Bridge. Always up for a new challenge, she is an expert at dissecting technology and getting to its core. She loves to tinker with new mobile phones, tablets and headphones.
Facebook
Twitter
WhatsApp
Linkedin
ReddIt
Email
Previous articleMicrosoft is rumoured to release its Surface Laptop 4 soon: Features and Price
Next articleApril 9 Amazon Quiz: Participate and win Rs 15,000 Amazon Pay Balance