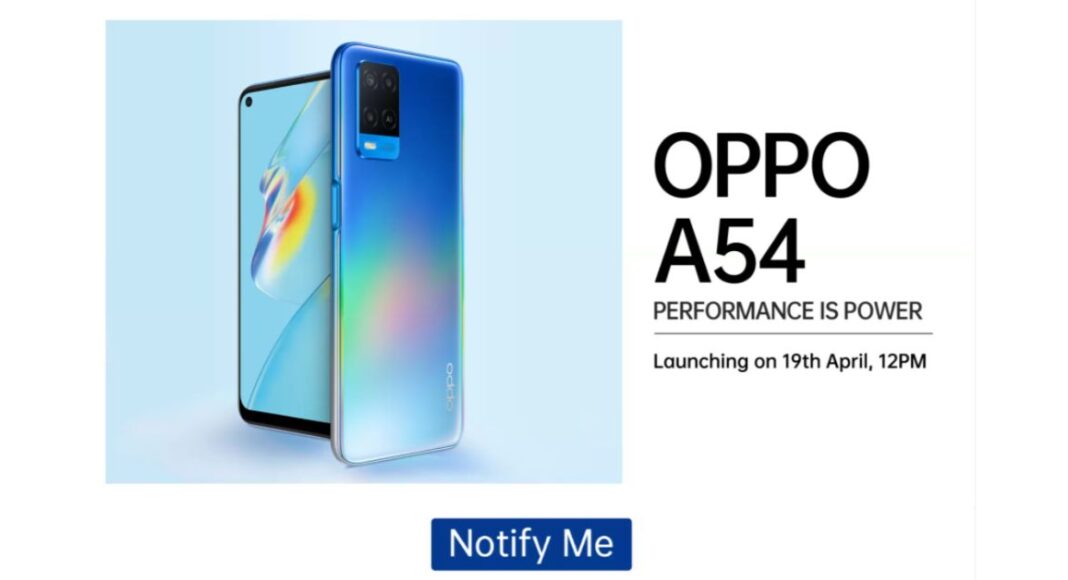 Oppo A54 is all set to launch in India on April 19. Teasing its availability, Flipkart has created a microsite for the device that not only reveals its launch date but also highlights the key specifications also. However, the pricing has not been revealed yet. Just ahead of the launch, a popular tipster has tipped the pricing of Oppo A54. It should be noted that the very next day of the launch the company is also launching Oppo A74 in the country.

Unlike the expected pricing of Oppo A74 5G, the company has not yet given any hints related to the pricing of Oppo A54. But according to a report citing information from popular tipster Ishan Agarwal the price of the Oppo A54 in India will start at Rs 13,490. This pricing is expected to be tipped for the base 4GB RAM with 64GB storage. While the 4GB RAM with 128GB storage variant will come at Rs 14,490 and the top-end model, which is 6GB RAM with 128GB storage model will be priced at Rs 15,990.

The upcoming Oppo A54 is the same device that was launched in Indonesia last month so we are well aware of the specs. In India, the smartphone will feature a 6.51-inch HD+ display having 720×1,600 pixels of resolution, 89.2 percent screen to body ratio, and 269ppi pixel density. It will run ColorOS 7.2 on top of Android 10. Under the hood, there is MediaTek Helio P35 (MT6765) SoC Oppo A54 offers 4GB of LPDDR4x RAM and 128GB of storage. The internal memory can be expanded up to 256GB via a microSD card.

For photos and videos, there will be a triple rear camera setup that includes a 13-megapixel primary sensor. In addition to this, it also includes a 2-megapixel macro lens and another 2-megapixel depth sensor for portraits. On the front, it is going to sport a 16-megapixel sensor for taking selfies and video calling.

Oppo A54 will be backed by a 5,000mAh battery, which is supported by 18W fast charging tech. In terms of connectivity, it will support 4G, Wi-Fi, Bluetooth, GPS, and a USB Type-C port.

Komila Singhhttp://www.gadgetbridge.com
Komila is one of the most spirited tech writers at Gadget Bridge. Always up for a new challenge, she is an expert at dissecting technology and getting to its core. She loves to tinker with new mobile phones, tablets and headphones.
Facebook
Twitter
WhatsApp
Linkedin
ReddIt
Email
Previous article
Motorola confirms to launch Moto G60 and Moto G40 Fusion in India on April 20
Next article
Google Assistant Driving Mode now available in India and more countries