The specs of the upcoming are rumoured to differ from the Chinese version. 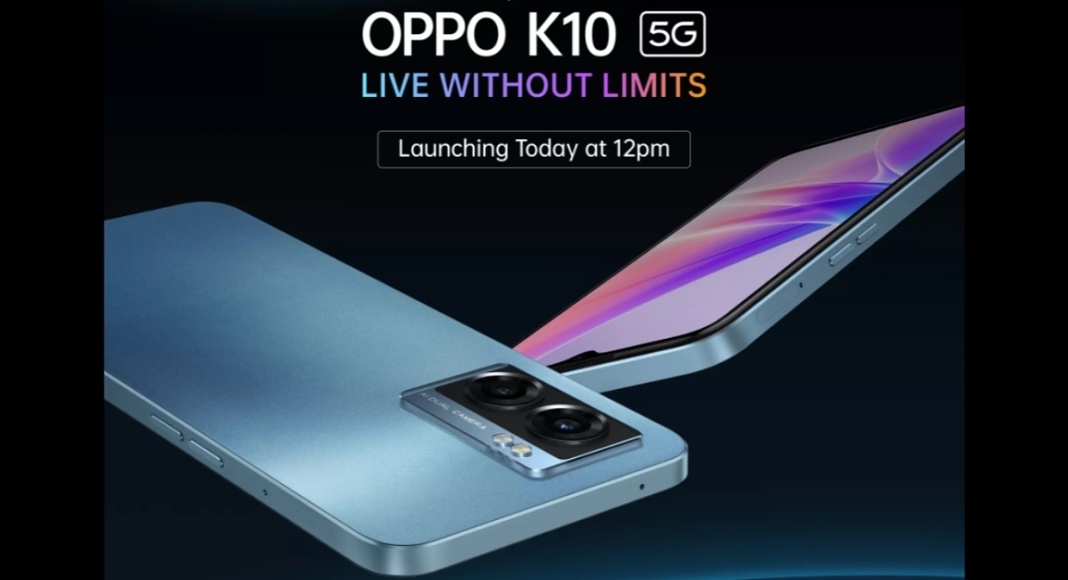 Oppo is preparing to release a new smartphone in India today. Oppo K10 5G will be announced by the firm. The corporation only released the 4G version of the handset in the country two months ago. Oppo has also revealed some of the handset’s characteristics, claiming that it will be powered by the MediaTek Dimensity 810 SoC and would have a triple camera configuration as well as a waterdrop notch display. The smartphone will come with Android 12 pre-installed and ready to use.

Today, starting at 12 p.m., the business will organise an online launch event to present the Oppo K10 5G. The webcast will be hosted on Oppo India’s official YouTube channel and website. The event can also be viewed on our website and on the company’s social media outlets, which we have integrated below.

In India, the Oppo K10 5G is estimated to cost around Rs 20,000. The Chinese company has also stated that the next smartphone would not be the same as the one that was unveiled in April in China. The K10 5G will be available for purchase on Flipkart, retail locations, and Oppo’s online store following its launch, according to the company.

The Oppo K10 5G is expected to boast a 6.56-inch display with a refresh rate of 90Hz, according to a recent leak. The upcoming smartphone is said to have 8GB of RAM and 128GB of UFS 2.2 storage. The Oppo K10 5G could come with Android 12 pre-installed in India.

The handset will reportedly contain a 48-megapixel primary rear camera and a 2-megapixel depth sensor, according to rumours. On the front, it is said to include an 8-megapixel selfie camera. The smartphone could have a 5,000mAh battery with a 33W rapid charging capability. A fingerprint sensor on the side and a dual-speaker system are also in the works.

The Indian variant, according to the Flipkart microsite, has a flat design with a waterdrop notch in the display instead of a punch hole. Furthermore, the smartphone has two LED flash modules inside the rectangular camera island on the back, which houses two cameras instead of three like the Chinese K10 5G. The Indian Oppo K10 5G’s specifications have yet to be revealed, but according to the firm, the phone will include the Oppo Glow design as well as a fingerprint and scratch-resistant back.

The Oppo K10 5G in China, on the other hand, has a 120Hz refresh rate on its 6.59-inch hole-punch display. The phone, which had three back cameras, was powered by a MediaTek Dimensity 8000-Max SoC. There was also a 67W rapid charger provided.

Komila Singhhttp://www.gadgetbridge.com
Komila is one of the most spirited tech writers at Gadget Bridge. Always up for a new challenge, she is an expert at dissecting technology and getting to its core. She loves to tinker with new mobile phones, tablets and headphones.
Facebook
Twitter
WhatsApp
Linkedin
ReddIt
Email
Previous article
OnePlus 10R 5G Review: Sophisticated Design And Good Quality Cameras, worth buying?
Next article
Garena Free Fire Redeem Codes Today 8 June 2022: Here is how to claim them