Should you buy the Samsung Galaxy F12? 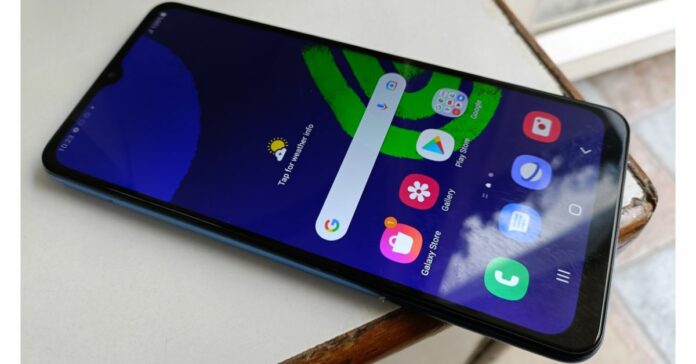 Samsung Galaxy F12 was launched in India some time ago under the company’s F-Series of the lineup. It comes with a quad rear camera system and a water drop-style display. The best part is the 90Hz refresh rate on the HD display and a massive 6,000mAh is being offered at Rs 11,000 price segment, which is great. Here is our review of the Samsung Galaxy F12.

Samsung Galaxy F12 comes with a refreshing look. However, the device is quite heavy to hold and seems thick on the sides. It comes with a textured plastic body with stripes on the back panel. The textured finish gives the phone a good grip and it doesn’t attract any fingerprints or smudges. There is a quad-camera setup given on the top left corner placed inside a square-shaped module that is slightly raised. On flipping the phone you will see a huge display of which we will talk about in detail a bit later. There is a water drop-shaped notch that plays house to the selfie camera. 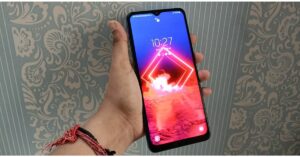 The bezels on the sides are quite noticeable. The chin area is relatively thicker than the rest of the body, which is not an issue at this price point. The secondary microphone is given on the top of the frame whereas the primary one is positioned at the bottom. The power button is also a fingerprint scanner and the volume rocker is placed on the right side, whereas you get a SIM card slot on the left. The bottom of the frame contains a 3.5mm headphone jack, a USB Type-C port and a single bottom-firing speaker. 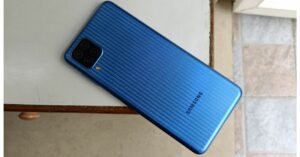 Now coming to the display Samsung Galaxy F12 features a massive 6.5-inch HD+ HD+ Infinity-V Display with 720×1,600 pixels of a resolution offering a 20:9 aspect ratio. To further sweeten the deal the company offers you a 60Hz refresh rate support on this device which amplifies to 90Hz during gaming, Instagram and Facebook scrolling and YouTube. Additionally, it comes with Corning Gorilla Glass on top. 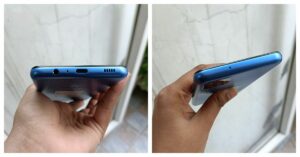 The display is bright but isn’t that bright under direct sunlight. Nonetheless is good enough for content viewing as it produces vibrant colour and is smooth to use. The screen also offers an eye comfort shield that prevents eye strain. That is an added feature advantage while using the phone at nighttime. 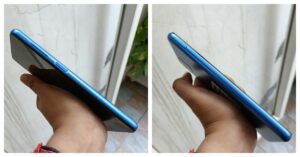 There is a  bottom-firing speaker, which is loud with good sound quality. The audio is further tuned by Dolby Atmos producing a surround sound experience.

During our tests, the device performed all the daily tasks and multitasking well. We did not come across any lag while switching between the app and scrolling on social media feeds. But when it comes to gaming the device can easily handle light gaming. However, the performance takes a hit when you play graphics-intensive games like COD, Battlegrounds India and others. You would need to bring down the graphic quality for hassle-free gameplay in those games. 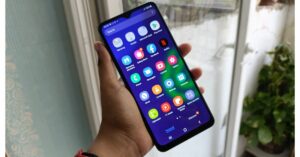 In terms of software, Samsung Galaxy F12 ships OneUI 3.1 based on Android 11. It does come loaded with bloatware such as MX TakaTak, Moj, PhonePe and ShareChat, but that’s not an issue as most of the apps can be easily uninstalled. Now that the company has started taking the competition very seriously it provides you with software upgrades, too. 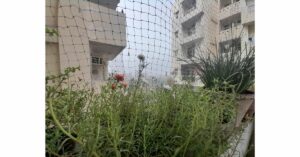 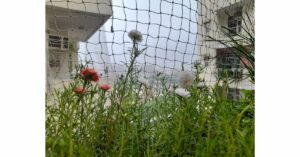 The daytime images from the rear shooter are nice and bright, but the image quality degrades when you shoot in low lighting or dark environments as there is no dedicated night mode to brighten up the images. That’s what you can expect from an under 10,000 smartphone.

Nevertheless, the wide-angle shots were decent and macro images also got the job done. On the other hand, the images shot from the 2-megapixel depth sensor were average and not great. The selfie camera allows you to go ultra-wide even on an 8-megapixel sensor. The videos can be recorded in two formats Full HD and HD @30fps. 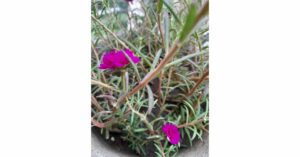 The Galaxy F12 is fuelled by a massive 6,000mAh battery that offers you more than a day of endurance even on heavy usage. If you are an average user then you can stretch the battery life to 2 or more days. Comes along with a 15W charger, which takes about two hours and 47 minutes to fully charge from zero to 100 percent.

Samsung Galaxy F12 is available in India with a price tag of Rs 10,999 for the base model. The device shares most of its similarities with the Samsung Galaxy M12, especially the cameras. The device comes with some decent tech specifications and offers an HD+ 90Hz display bundled with a giant 6,000mAh battery at this pricing. So if you are looking for a budget smartphone it can be a great deal.

- Advertisment -
Samsung Galaxy F12 review: A great contender in the budget segmentSamsung Galaxy F12 was launched in India some time ago under the company’s F-Series of the lineup. It comes with a quad rear camera system and a water drop-style display. The best part is the 90Hz refresh rate on the HD display and a...