The colour of the smartphone's rear panel changes when exposed to sunlight. 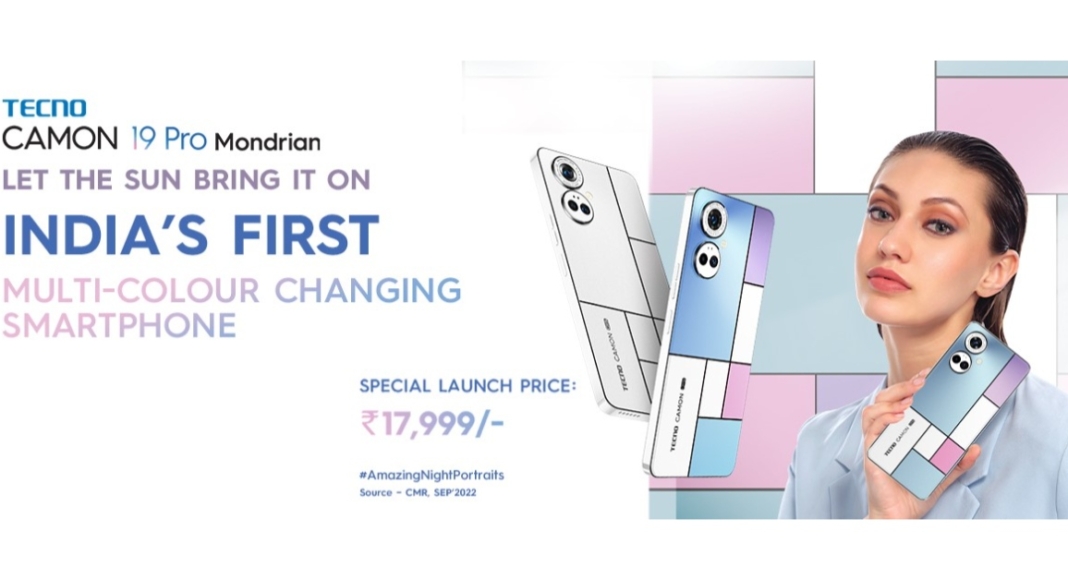 Tecno Camon 19 Pro Mondrian Edition has been launched in India. The biggest highlight of the smartphone is its design as it comes with a colour-changing rear and other premium features. There is a 120Hz display on the phone and a 64-megapixel RGBW+ (G+P) primary sensor. There is a 5,000mAh battery onboard as well and the phone is powered by MediaTek Helio G96 SoC.

For the model with 8GB RAM and 128GB storage, the cost of the Tecno Camon 19 Pro Mondrian Edition has been fixed at Rs 17,999. Starting on September 22, the smartphone will be pre-orderable on Amazon.

Additionally, customers can get a 10% instant discount by using their SBI Bank cards.

The smartphone has a rear panel that can change colours when exposed to sunshine thanks to the company’s Polychromatic Photoisomer Technology. A 6.8-inch full-HD+ display is available on the Tecno Camon 19 Pro Mondrian Edition. The screen’s refresh rate is 120Hz, and its screen-to-body ratio is 94.26 percent as well as Widevine L1 support and is certified by TUV Rheinland. The device is powered by His 8.6, which is based on Android 12. The MediaTek Helio G96 SoC and 8GB LPDDR4x RAM in the smartphone power it. Memory Fusion technology enables an increase in onboard RAM of up to 13GB. It includes 128GB of inbuilt UFS 2.2 storage, and a dedicated slot allows for microSD card expansion up to 512GB.

For the optics, a 64-megapixel RGBW+ (G+P) primary sensor with optical image stabilisation (OIS), a 50-megapixel portrait sensor, and a 2-megapixel sensor make up the Camon 19 Pro Mondrian Edition’s triple rear camera configuration. The phone has a 32-megapixel front-facing camera for selfies.

A 5,000mAh battery that supports 33W rapid charging is included in the Tecno Camon 19 Pro Mandorian Edition. According to claims, the battery can power up to 37 days of standby time and up to 124 hours of audio playback on a single charge. Furthermore, it is stated that using fast charging technology, it will take 13 minutes to fully charge the battery from empty to 30 percent.

Komila Singhhttp://www.gadgetbridge.com
Komila is one of the most spirited tech writers at Gadget Bridge. Always up for a new challenge, she is an expert at dissecting technology and getting to its core. She loves to tinker with new mobile phones, tablets and headphones.
Facebook
Twitter
WhatsApp
Linkedin
ReddIt
Email
Previous articlePhilips OneBlade Pro QP6550 electric shaver review: All in one for men’s grooming
Next article8 Best Apps to download on your new Apple Watch Series 8 and 8 Ultra