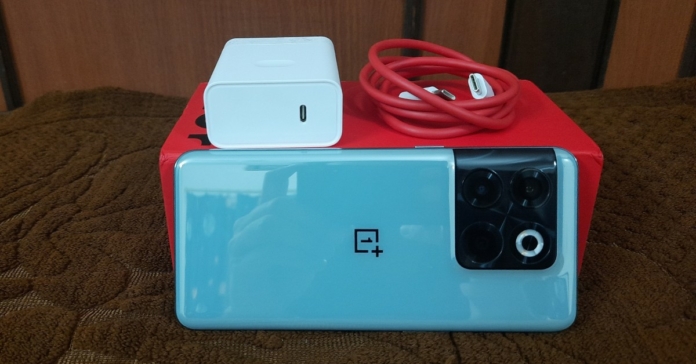 The OnePlus 10T officially launched in India last week on August 3. After omitting the T series on the OnePlus 9, OnePlus has decided to bring it back for the OnePlus 10. The Snapdragon 8+ Gen 1 chipset brings enormous power to the device and is a clear upgrade over the flagship OnePlus 10 Pro. The massive 130W charger provides an unmatched charging speed. With the base 8GB + 128GB variant priced at Rs 49,999, the OnePlus 10T is bound to make heads turn in the premium smartphone segment, and maybe even attract consumers who were planning to buy the OnePlus 10 Pro. We used the OnePlus 10T for a week and put its specs and features to test. Here is our comprehensive OnePlus 10T review just for you.

Read Also: 10 Best Apps to Download and Use First On Your New OnePlus 10T

The OnePlus 10T comes packed in the OnePlus signature rectangular red box, with the company’s branding on the front. The smartphone ships with its own 150W turbocharger (more on that later!) and a protective case. The SIM tray, microphone, Type-C USB Port, and speaker are housed at the bottom of the phone, with a second loudspeaker present at the top. The volume keys and power button can be found on either side of the OnePlus 10T. Like other smartphones in this category, the headphone jack has been omitted along with the ringer key.

When it comes to design, the OnePlus 10T seems indistinguishable from the OnePlus 10 Pro at first glance. While OnePlus has chosen to retain most of the design elements from its flagship offering, there are a few changes on the 10T. Finished with Gorilla Glass 5, the Jade Green version (which we are reviewing) has a smooth back panel, a change from the textured finish on the 10 Pro.

This panel has the tendency to attract tiny smudges, but after using it for a week we can safely say that it doesn’t amount to be a nuisance. The front selfie camera is now positioned at the top-centre of the screen instead of on the top-left side.

As we mentioned earlier, the OnePlus 10T does not come with the company’s iconic Alert Slider, which may disappoint some brand loyalists. But for those that do not need a dedicated switch to toggle between ringing modes, this feature won’t be missed. OnePlus explained that while the Alert slider is a small fixture on the external design, internally it can occupy a fair bit of space.

The company decided to drop it for high wattage charging, a large battery capacity, and a better antenna signal. This seems like a good enough trade-off to us, as the 10T does cover a lot of ground in battery charging and capacity and superior network speeds.

The camera unit design remains the same, with the OnePlus 10T sporting the same square panel as the 10 Pro. However, it is missing the Hasselblad branding and ditches the telephoto lens for a 2MP macro lens. We dive into the effects of these changes in the camera performance section of the review, later on.

Coming to the display, OnePlus has opted for a flat-edge display on the 10T instead of the curved edge found on the 10 Pro. The 6.7-inch Full HD+ touchscreen has a Fluid AMOLED display with an adaptive refresh rate of up to 120Hz. With 1,080×2,412p resolution and 87.9% screen-to-body ratio, the OnePlus 10T is an excellent phone to watch video content on. The stereo speakers on either side of the phone create an enveloping surround sound, producing an immersive experience. The refresh rate of 120Hz is thoroughly utilised in gaming mode, which we tested by playing Apex Legends, experiencing no throttling or unwanted load time.

In order to save battery, the refresh rate can be brought down to 90 and 60Hz when the smartphone isn’t performing heavy tasks. The 10T offers a peak brightness of 950 nits and the display adapts meticulously to the outdoor environment, being perfectly visible even in direct sunlight.

Even though the in-display fingerprint sensor is becoming a staple in most smartphones across all categories, the OnePlus 10T deserves a special mention for its incredible unlock speed that is unmatched across the spectrum. The 120Hz refresh rate provides a seamless user experience, and the phone is very receptive to touch gestures. Overall, we quite liked what we saw.

We tested the mid-placed variant with 12GB RAM and 256GB storage, and it handled whatever tasks we threw at it with absolute ease. The 10T can hold dozens of apps running in the background, seamlessly switching between them with negligible load time. We did not experience any dip in speed even in split screen mode, as we tried playing YouTube with Instagram and other apps, and they all worked out perfectly.

The vapor chamber in the 10T is the largest on any OnePlus smartphone. This vapor chamber coupled with 3D graphite and a copper coil keeps the temperature at an optimum level despite the smartphone performing heavy tasks. We tried playing Apex Legends Mobile and Garena Free Fire MAX on the 10T for an extended period of time and the phone barely got warm.

The 10T scored 722 on the Geek benchmark 5 test in default mode and 1294 in high-performance mode. This score places it with the likes of Samsung Galaxy S21 Ultra, Samsung Galaxy Note 20 Ultra and Xiaomi Poco X3 Pro.

Coming to its operating system, the OnePlus 10T runs on Android 12 skinned with OxygenOS 12.1. The OxygenOS is heavily influenced by Oppo’s ColorOS. The phone comes with no bloatware, except for the Netflix app. One interesting feature is the ‘Shelf’ which can be viewed by swiping down from the top-right section of the screen. The Shelf accommodates all your interactive widgets in one window. These widgets can include temperature, step counter, data usage and storage counter, Spotify, live sports scores and a lot more.

For users who do not want to compromise one-half of the top screen swipe, the Shelf can be easily disabled from Settings. The OnePlus 10T will also get an Oxygen 13 upgrade with the Android 13 coming later this year. OnePlus has also promised three major updates with the 10T.

One of the most talked about components and an attractive feature for prospective buyers is the turbocharger of the OnePlus 10T. The 160W power adapter can provide up to 150W of wired charging. OnePlus continues to deliver fast charging speeds and the 10T beats any other smartphone in this aspect. It takes just over 20 minutes to fully charge the 4,800-mAh dual cell battery with the turbocharger, and if you are in a hurry 3 minutes of charge will take it from a 1% to 15% charge.

The battery typically lasts an entire day, even with regular periods of gaming and above-average screen time. OnePlus claims that the 10T retains 80% battery health after 1,600 charge cycles, which is a little over 4 years. OnePlus 10T does not have wireless charging, but when the phone takes 20 minutes to fully charge we doubt that anyone’s going to complain about it.

The camera unit of the OnePlus 10T comprises a 50MP primary camera, an 8MP ultrawide and a 2MP macro lens. As we mentioned earlier, the telephoto lens found on the 10 Pro has been ditched and a 2MP macro lens finds its way into 10T’s camera unit. This decision doesn’t make a lot of sense as the 50MP primary lens does a much better job of capturing images up close than the macro lens. There is no Hasselblad branding on 10T’s camera array either, as OnePlus seems to be keeping it as a distinguishing feature for the 10 Pro.

The 50MP primary lens does most of the heavy lifting in this camera unit, providing remarkable, vivid pictures in both outdoor and indoor lighting. The camera works particularly well in daylight, producing highly detailed images with well-balanced colours without any oversaturation. During the nighttime, the main lens does a fine job of capturing light in limited conditions. The images produced in night mode are at par with other smartphones in this category, and the grain is barely noticeable.

The rear camera can record videos up to 4k at 30 or 60fps. The ‘movie’ mode provides greater control over the ISO, Shutter, EV, MF, and WB. The camera stabilisation on this mode is also pretty neat, and it can be used to record professional-grade videos. The 16MP front selfie camera performs well in regular and portrait mode, and also records 1080p resolution videos at 30 fps. Another good feature of the native camera app is the ‘Dual-View video’ mode. The ‘Dual-View video’ mode can record video from both rear and front cameras simultaneously.

Read Also: OnePlus 10 Pro Review: Is it the right investment?

At the price of Rs 49,999, the OnePlus 10T is a remarkable smartphone. Even though OnePlus may not market it as a gaming smartphone, it certainly matches the performance of phones in that category. The CPU performance of the OnePlus 10T exceeds that of the flagship 10 Pro. While the camera unit and missing alert slider may put off a few buyers, we don’t see any reason why it would deter buyers looking to buy a premium smartphone at this price point.

- Advertisment -
OnePlus 10T review: Super fast speed at an attractive price, should you buy it?The OnePlus 10T officially launched in India last week on August 3. After omitting the T series on the OnePlus 9, OnePlus has decided to bring it back for the OnePlus 10. The Snapdragon 8+ Gen 1 chipset brings enormous power to the device...