HomeNewsAfter 10 years, Chandrayaan-2 is scheduled to lift off to the Moon

After 10 years, Chandrayaan-2 is scheduled to lift off to the Moon

Chandrayaan-2 is the successor to the Chandrayaan-1 that found evidence of water on Moon. 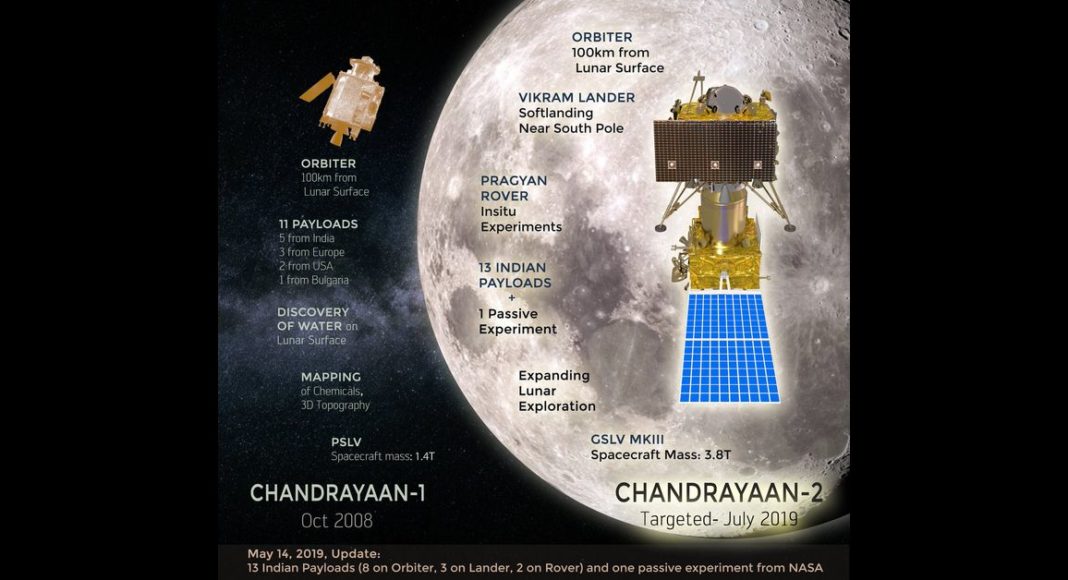 Chandrayaan-1, India’s first planetary probe to the Moon was launched by the Indian Space Research Organization (ISRO) 10 years ago on October 22, 2008. It was India’s first ever planetary mission to the moon and it carried a range of experiments, both national and international. The experiments were successful as it collected a significant amount of important data during its mission about the study of Moon, its chemistry, its geology and the mineral make-up. And now, ISRO has scheduled the launch of its successor– the Chandrayaan-2 in the coming weeks. The launch of Chandrayaan-2 comes much-awaited as it was delayed number of times in the past due to unforeseen events.

There were a number of instruments placed on the Chandrayaan-1, the second was the Mini-Synthetic Aperture Radar (Mini-SAR) that also found water-ice deposits in the craters on the far side of the Moon. The third instrument was the Indian Moon Impact Probe (MIP) which identified the signature of water in the lunar exosphere.

No doubt, Chandrayaan-1’s mission was successful and its successor, the Chandrayaan-2 is hoping to find more than the first probe. Chandrayaan-2 will be unmanned mission and it cost Rs 603-crore, the probe is expected to launch on July 15 if everything went according to plan. Chandrayaan-2 carries a lander along with a rover more than Chandrayaan-1 and weighs 3,890 kg. It will be launched with the Geosynchronous Satellite Launch Vehicle (GSLV) MkIII.

The lander on top of the Chandrayaan-2 will land on the lunar surface and unload the Rover to the Moon. The Rover will then take measurements from the surface of the Moon while the Orbiter will continue to orbit around the Moon.

It should be noted that the mission life of orbiter is 1 year and it is capable of communicating with the Indian Deep Space Network (IDSN) at Byalalu, Karnataka as well as the Vikram Lander. The lander and the rover are expected to touch down at a site 600km from the lunar South Pole. The rover, 25 kgs of weight carries two instruments, a Laser-Induced Breakdown Spectroscope (LIBS) and an Alpha Particle X-Ray Spectrometer (APXS). This mission is expected to provide us with a map of the topology of the Moon.

Aman Singhhttps://www.gadgetbridge.com/
Aman Kumar Singh has a Masters in Journalism and Mass Communication. He is a journalist, a photographer, a writer, a gamer, a movie addict and has a love for reading (everything). It’s his love of reading that has brought him knowledge in various fields including technology and gadgets. Talking about which, he loves to tweak and play with gadgets, new and old. And when he finds time, if he finds time, he can be seen playing video games or taking a new gadget for a test run.
Facebook
Twitter
WhatsApp
Linkedin
ReddIt
Email
Previous articleSamsung is planning to launch three new tablets in India next week: Reports
Next articleHow to mute and customize notifications on WhatsApp