Comparison between the new Honor 20, Honor 20 Pro and the Huawei's P30 Pro. 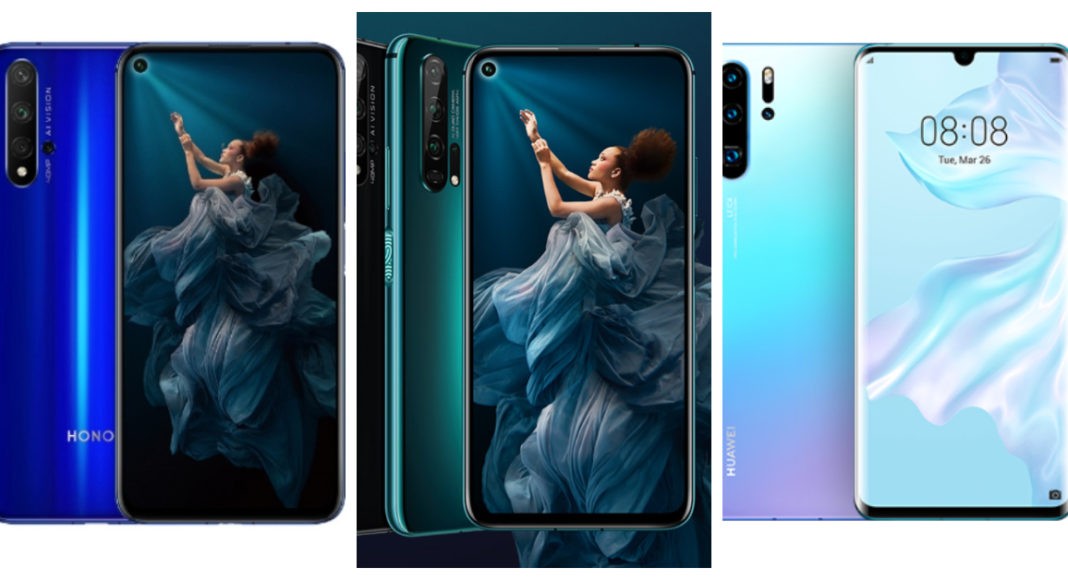 Honor 20 and Honor 20 Pro have finally been launched in India today. Both these smartphones come with specifications similar to the Huawei’s flagship P30 Pro handset but costs half the money. They too pack the quad-camera setup and offer a premium built and performance. Here we are comparing the two newly launched devices – the Honor 20 with the Honor 20 Pro with Huawei’s P30 Pro. Read on to find out how they differ and how they are similar to each other.

Display-wise, the Huawei is the winner with its OLED display panel and a bigger screen. It may come at a cost, but OLED screens are any day better than Full HD+ displays.

All three smartphones are powered by the same Huawei’s Kirin 980 SoC which so their performance would somewhat be similar. In the end it all comes down to the software optimization.

All three smartphones come with a quad-camera setup. While the Huawei P30 Pro has a 40MP main camera, the other two devices pack a 48MP Sony camera as their main sensor. But then, Huawei’s smartphone has support for up to 50x zoom and that is a capability that isn’t found in any other handset.

In terms of the front facing camera, all three devices come with the same 32MP selfie camera, but the Huawei P30 Pro has support for AI HDR+ mode making it a superior camera.

The Huawei is at a loss here even though it has support for additional storage because it only supports nano-memory cards which are rare and costly.

In terms of battery backup, Huawei P30 Pro is the clear winner because it packs a larger battery and it also has a great backup which easily lasts 1.5 days on heavy usage.

All three devices run Android 9 Pie which is the current version of the OS, but there is a chance they might not get the Android Q update in the future.

Huawei P30 Pro costs almost double of the two smartphones. However, it also packs a number of unique and premium features. Users who want a top-class camera smartphone with flagship performance and specifications but they don’t want to burn a hole in their pocket can go for either of the Honor 20 or the Honor 20 Pro depending on their requirements. But then if you do want a smartphone that is premium, you would also have to pay more for it.

Aman Singhhttps://www.gadgetbridge.com/
Aman Kumar Singh has a Masters in Journalism and Mass Communication. He is a journalist, a photographer, a writer, a gamer, a movie addict and has a love for reading (everything). It’s his love of reading that has brought him knowledge in various fields including technology and gadgets. Talking about which, he loves to tweak and play with gadgets, new and old. And when he finds time, if he finds time, he can be seen playing video games or taking a new gadget for a test run.
Facebook
Twitter
WhatsApp
Linkedin
ReddIt
Email
Previous articleFirst look of Loki TV series shows Tom Hiddleston in the 1970s
Next articleSamsung Galaxy Note 10 Pro to house a 4,170 mAh battery, triple rear cameras: Report