HomeReviewsMotorola One Action review: The first of its kind

Motorola One Action review: The first of its kind

The phone comes with an Action Camera 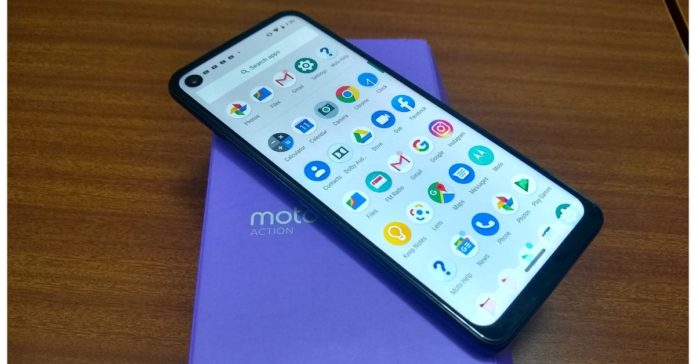 The Motorola One Action has launched in India some time ago. The latest offering is part of the Android One Programme. One Action comes with a GoPro Like action camera that comes with Enhanced Video Stabilisation for well-founded videos. The phone also allows the user to record a landscape video while holding the phone in portrait mode.

It is available in Denim Blue and Pearl White colour options. And for the review, we got the Denim Blue variant. But if truth to be told we are fonder of the Pearl White variant. Moving ahead when you see the handset it jogs your memory back to Moto One Vision. So read our review of Motorola One Action to know what sets it apart from One Vision.

If we go by the looks Motorola One Action looks similar to Moto One Vision that the company launched a few months ago. It has a tall and narrow built that makes it look different from other smartphones in the market. It comes with along display that supports a 21:9 aspect ratio which sometimes makes it cumbersome to use with one hand. It has a thin bezel and chin, plus it dons a glossy plastic finish along with a gradient finish on the rear. On the front, we get a hole punch camera, which we found a bit distracting because it has a very thick outline. 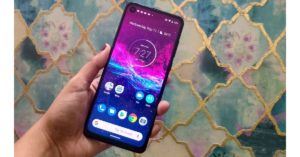 There is a triple camera set up on the back of the Motorola One Action. Other than that, the smartphone has a Motorola logo at the centre, which has a fingerprint scanner embedded on it. So, this means it does not have an in-display fingerprint scanner. The back panel has a reflective finish, which does it attract fingerprint smudges. On the left, it has the power button with the volume rocker keys. The left side has the Dual SIM tray. The button placements are the same as of the One Vision except for the glass body that made it a bit heavier. Therefore, the Platic body of the One Action makes it lighter with its curved edges. On the top, it comes with a 3.5mm audio jack while the base has a charging port, microphone and a speaker grille. Overall, it is a very good-looking smartphone.

Motorola One Action comes with a 6.3-inch full-HD+ (1,080×2,520 pixels) IPS CinemaVision display with a 21:9 aspect ratio. With a taller display, it proved to be great for browsing various apps like Instagram, Facebook as well as streaming YouTube and watching movies on its widescreen was fun. The colours on the display are bright and the screen is good enough to be used under bright sunlight. As we mentioned earlier the hole-punch camera is quite big that just sits at the corner of the display panel. A smaller radius would have been a boon.

Performance and Cameras
Motorola One Action comes with a Samsung chipset inside that is powered by octa-core Exynos 9609 SoC paired with 4GB of RAM and 128GB of internal storage. The storage can be expanded up to 512GB via a microSD card. While on the software front it runs stock Android 9 Pie and is part of Google’s Android One programme that guarantees monthly security updates for three years along with two most important software updates.

During our review, we found it could perform daily multitasking easily and the performance was also up to the mark and we did not stumble on any lag. The inclusion of one button gesture on the screen is a good thing. Tapping on the button will allow you to go home, swiping left to go back, swiping right for the previous app, swiping up for the recent apps and holding on the button will activate the assistant. We found it much easier than the three-button navigation do up. 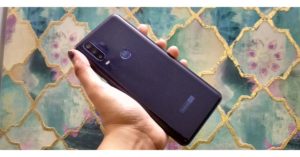 All in all, the phone was smooth and performed fast. To give it life it comes loaded with 3500mAh battery that lasts for more than a day, if not used profoundly. We browsed the internet, social media apps like Instagram, Facebook, streamed videos on YouTube, listened to music while travelling, tried out the new camera feature for photography and videography. And it still lasted us a full 24 hours. So yes, it has a good battery life but the provided 10W charger took a long time to charge the device. Especially when you have to rush out and want the quick charger to get you that extra battery juice.

Moving over to its camera performance. Now, this is the most important part of Motorola One Action’s detailed review, as the device focuses on photography and videography. The One Action as the name suggests carries a camera sensor for action photography and videography just like GoPro. Before we talk about it, let’s first take a look at the camera specs. The phone comes with a triple camera setup on the back panel. The set up features a 12-megapixel primary sensor along with an f/1.8 lens, an action camera sensor with 2-micron pixel size and f/2.2 lens and a 5-megapixel depth sensor with an f/2.2 lens. While on the front it sports a 12-megapixel camera sensor with 1.25-micron pixel size and an f/2.0 lens for selfies and video calling.

The Triple rear camera set up is supported by Enhanced Video Stabilisation feature that works great for action videography, offering unwavering video recording. The smartphone lets you record videos in a landscape format while holding the phone vertically and it does permit the user to click wide pictures in the same mode. So to test it we recorded few videos in the action mode and we were impressed to see the output. The phone recorded quite a stable ultra-wide video while holding the phone upright. 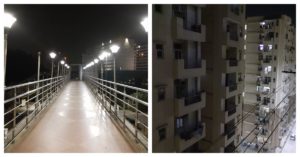 We must say while holding the phone vertically and recording a video, it becomes much easier to pan left and right.  A separate static pic mode with this mode would have been a boon too, and every time to click a picture we would not need to turn on the video to get a widescreen image.  At the end of the day, this action camera comes very close to GoPro, but it still is not a GoPro. Nevertheless, it is a step in the right direction by Moto.

The camera performance was amazing while shooting pictures indoors as well as outdoor. It delivered impressive images when the pictures were shot during bright daylight as well as during the hours of darkness.  We have attached a few samples of pictures taken during the daylight and low light conditions also. The selfies also have good contrast and were sharp as well. At Rs 13,999 it is a great package to own. 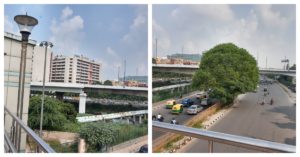 To conclude we would say at this price range not many phones manage to offer you such a good deal and great camera features. Looks-wise it a decent phone but we would recommend you use a case to protect the back panel as it catches scratches very easily because of its plastic build. The device is also light in weight, tall and slim. But that big punch hole camera was really off-putting when watching videos or playing a game. It looked more like a bindi (Indian women’s decorative mark on the forehead) than a camera.

Well, jokes apart, the overall experience was good we can say it is a multi-tasking phone. The company could have given a better charger than the 10W fast charger which comes in the box. If you love photography and are a selfie addict then go for this amazing smartphone at an incredible price.

Komila Singhhttp://www.gadgetbridge.com
Komila is one of the most spirited tech writers at Gadget Bridge. Always up for a new challenge, she is an expert at dissecting technology and getting to its core. She loves to tinker with new mobile phones, tablets and headphones.