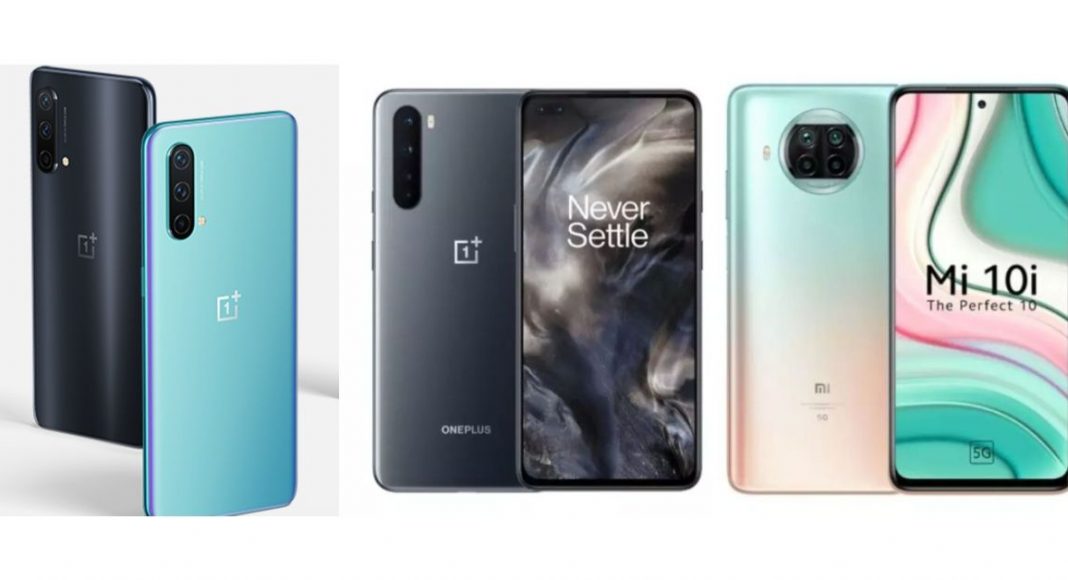 Yesterday, OnePlus introduced the OnePlus Nord CE 5G smartphone as its most affordable latest model to the Nord series in India. The device comes with some differences over the existing OnePlus Nord smartphone. To attract the masses the handset has been produced at a more affordable price range that will give tough competition to other smartphones like Xiaomi Mi 10i and the original Nord bringing powerful cameras with additional features. So we have put all three devices together to help you understand which one you should go for.

OnePlus Nord CE 5G: Triple rear camera set up on its back featuring a 64-megapixel primary camera sensor, an 8-megapixel ultra-wide camera with 119 degrees of FoV and a 2-megapixel depth sensor.

Looking at the specification sheet there are some exceptional differences between the three smartphones. The OnePlus Nord comes with a glass rear and an alert slider like other OnePlus devices, the new OnePlus Nord CE 5G offers a plastic rear and also misses the alert slider. However, it includes a headphone jack which the original Nord does not offer.

Xiaomi Mi 10i comes with a larger display than the Oneplus smartphones. The display supports a 120Hz refresh rate whereas the other two only come with a 90Hz refresh rate. In terms of hardware, OnePlus Nord runs on the Qualcomm Snapdragon 765G platform whereas OnePlus Nord CE 5G and Xiaomi Mi 10i runs on the Qualcomm Snapdragon 750G 5G. If we compare the mobile platforms, 750G is more efficient than 765G that can only be noticed during the day to day usage. Also, Xiaomi’s device offers a larger battery capacity than the Nords at 4,820mAh supported by 33W fast charging tech.

Both the original Nord and the Mi 10i features a quad rear camera whereas the new Nord has been downgraded with a triple camera set up but has a primary camera with better resolution than its predecessor. This is where Xiaomi stands out with a 108-megapixel primary quad camera set up. Speaking of selfies, the older Nord offers a dual front camera consisting of a 32-megapixel main camera and an 8-megapixel ultra-wide-angle camera, therefore surpassing others.

Comparing the pricing, Xiaomi Mi 10i will attract more attention and praise than the others as it is a more camera-focused phone at Rs 20,999. So for the selfie addicts, you can go for the Nord but we would suggest you go for Xiaomi as it provides a powerful rear camera set-up and other useful features as well as hardware.

Komila Singhhttp://www.gadgetbridge.com
Komila is one of the most spirited tech writers at Gadget Bridge. Always up for a new challenge, she is an expert at dissecting technology and getting to its core. She loves to tinker with new mobile phones, tablets and headphones.
Facebook
Twitter
WhatsApp
Linkedin
ReddIt
Email
Previous articleHow to create your own room in the Clubhouse app: A complete step by step guide
Next articleHow to recharge Reliance Jio mobile number using WhatsApp