HomeMobilesPoco M3 Pro 5G to launch globally on May 19 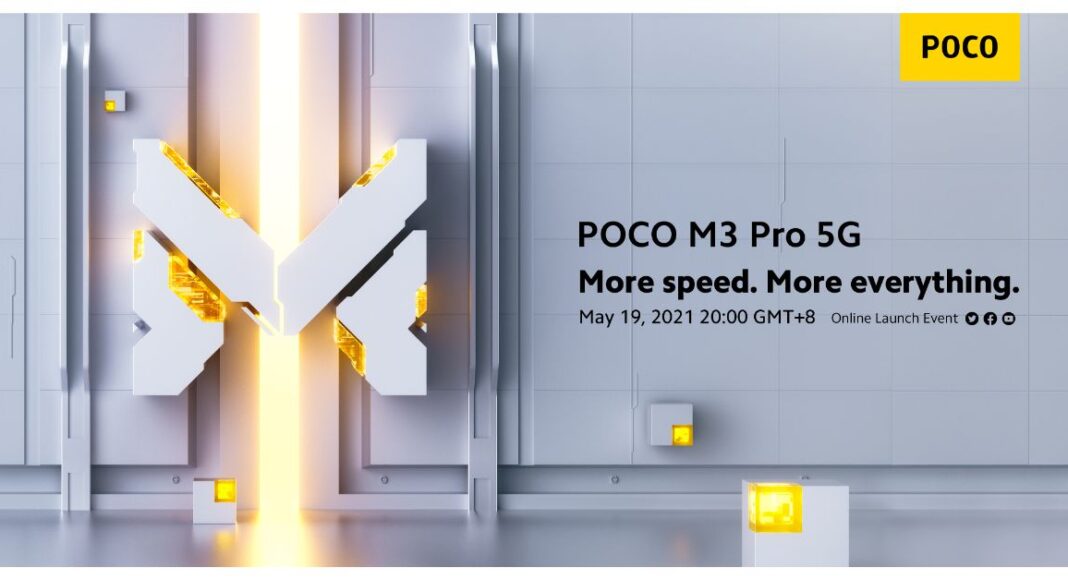 Poco is all set to launch a new smartphone in the market. The company has now confirmed to introduce Poco M3 Pro 5G in the Global market. It should be noted that the device also appeared on the BIS certification website suggesting the launch. But in the light of COVID-19 Poco will not launch any new phone in the near future in the country but will launch Poco M3 Pro 5G globally on May 19. The device is said to be a modified variant of Redmi Note 10 5G.

Poco took to Twitter to announce the arrival of the Poco M3 Pro 5G in the market. As per the latest launch poster revealed shared by the company, the launch event will be hosted virtually to unveil the upcoming phone. The virtual event is scheduled for May 19 that will kickstart at 20:00 GMT (1:30 AM IST).

The tweet says, “Look out! Another POCO launch is coming your way! #POCOM3Pro 5G is coming in hot! Who’s ready for more? Stay tuned for May 19th. We are bringing you #MoreSpeedMoreEverything!”

According to an FCC listing, Poco M3 Pro 5G is revealed to be a rebadged variant of Redmi Note 10 5G that was launched last month in the European market. So everything on the upcoming 5G phone would be the same as the Redmi device with just different branding. On the other hand, this handset with a similar model number was spotted on the Bureau of Indian Standards (BIS) website which hinted at the imminent launch in India. As per the report the device has been found with model numbers M2103K19PI and M2103K19PG respectively. The G in the model number M2103K19PG stands for ‘Global’ that was spotted on the US Federal Communications Commission (FCC) filling.

On the specification part, the Poco M3 Pro 5G will share the same specs as the Redmi Note 10 5G but there will be slight changes in the design. The device is expected to come with a 6.5-inch full-HD+ LCD panel with 1,080×2,400 pixels of resolution, a 90Hz refresh rate panel and 500 nits of brightness. The device will include an octa-core MediaTek Dimensity 700 SoC coupled with 4GB of RAM, and 128GB UFS 2.2 storage.

On the camera front, Poco M3 Pro 5G will sport a triple camera module on the back of the Poco M3 Pro 5G will be housing a 48-megapixel primary sensor. It will be accompanied by a 2-megapixel depth and 2-megapixel macro sensors. Upfront there is going to be an 8-megapixel selfie sensor. The mobile phone will be backed by a 5,000mAh battery that would be supported by 22.5W fast-charging tech.

Separately, Poco has extended the warranty of its phones by two month due to the COVID crisis in India. In addition to this, it has also delayed all their upcoming launches in the country till the current scenario improves. Poco India stated, “Poco India has consciously decided to not conduct any launch in May 2021. We are pausing our new launches as we hope for the situation to improve. We will keep you posted on further developments”

Komila Singhhttp://www.gadgetbridge.com
Komila is one of the most spirited tech writers at Gadget Bridge. Always up for a new challenge, she is an expert at dissecting technology and getting to its core. She loves to tinker with new mobile phones, tablets and headphones.
Facebook
Twitter
WhatsApp
Linkedin
ReddIt
Email
Previous articleBattlegrounds Mobile India pre-registrations to go live from May 18 on Google Play Store, rewards specific to Indian players also announced
Next articleInfinix Note 10, Note 10 Pro and Note 10 Pro NFC with MediaTek processor launched globally