Realme 3 Pro goes on open sale in India: Get all the details here

The news was revealed by Realme’s CEO Madhav Sheth 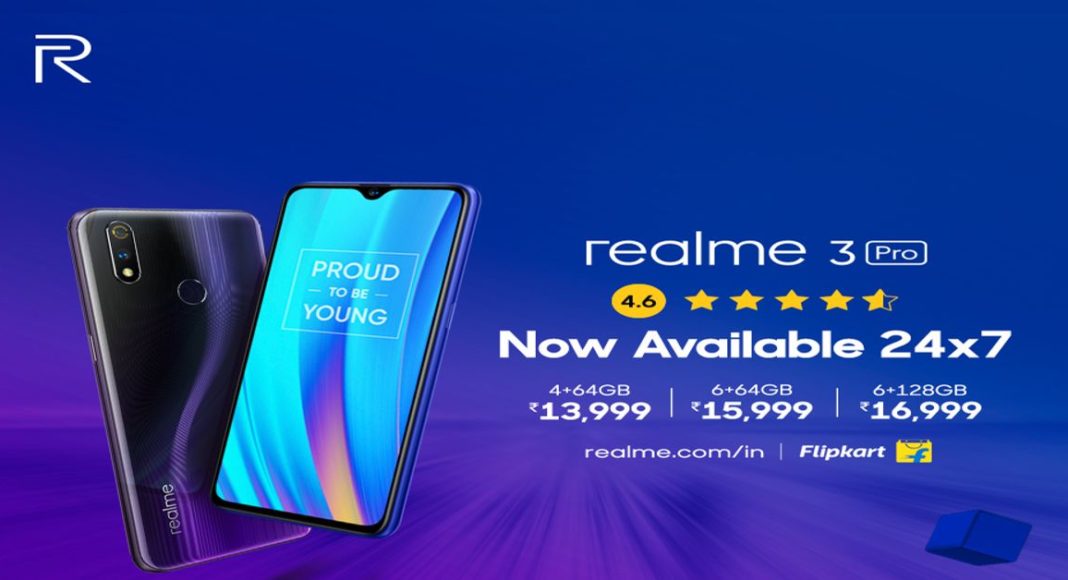 Commenting on the sale, Madhav Sheth, Chief Executive Officer of Realme India said, “Considering the rapidly growing customer demand towards Realme 3 Pro, we are increasing the stocks and making our flagship device available at an open sale. We saw a phenomenal response from our customers for the flagship smartphone and had sold 1,70,000 lakh + units in 8 minutes of its first sale. The initiative is to fulfil our commitment to deliver best consumer experience to our customers.”

The Realme 3 Pro sports a 6.3-inch Full-HD+ (1080 x 2340 pixels) IPS display with an aspect ratio of 19.5:9. The 2.5D display of the device comes with Corning Gorilla 5 protection on top. It is powered by an octa-core Qualcomm Snapdragon 710 SoC paired with Adreno 616 GPU. The new smartphone from Realme comes with either 4GB or 6GB of RAM paired with 64GB and 128GB of storage options. The smartphone has support for a microSD card of up to 256GB. The Realme 3 Pro runs Android 9 Pie skinned with ColorOS 6 and it packs a 4,045mAh battery with VOOC 3.0 fast charging support. The device comes with a rear-mounted fingerprint scanner along with Widevine L1 certification which allows the users to stream HD content from Amazon Prime Videos and Netflix.

For imaging duties, the Realme 3 Pro features a dual-rear camera setup with a 16MP main camera (IMX519 sensor) with an f/1.7 aperture and a 5MP secondary camera (GC5035 sensor) with an f/2.4 aperture. On the front, there is a 25MP selfie camera with an f/2.0 aperture. The Realme 3 Pro comes with camera features which includes 960fps super slow motion video recording, Ultra HD mode for capturing 64MP images along with an optimised Nightscape etc.

Aman Singhhttps://www.gadgetbridge.com/
Aman Kumar Singh has a Masters in Journalism and Mass Communication. He is a journalist, a photographer, a writer, a gamer, a movie addict and has a love for reading (everything). It’s his love of reading that has brought him knowledge in various fields including technology and gadgets. Talking about which, he loves to tweak and play with gadgets, new and old. And when he finds time, if he finds time, he can be seen playing video games or taking a new gadget for a test run.
Facebook
Twitter
WhatsApp
Linkedin
ReddIt
Email
Previous article
Samsung Notebook 7 with 13-inch and 15-inch displays announced: Key details
Next article
OnePlus 7 Pro review: The game just got upgraded to a whole new level