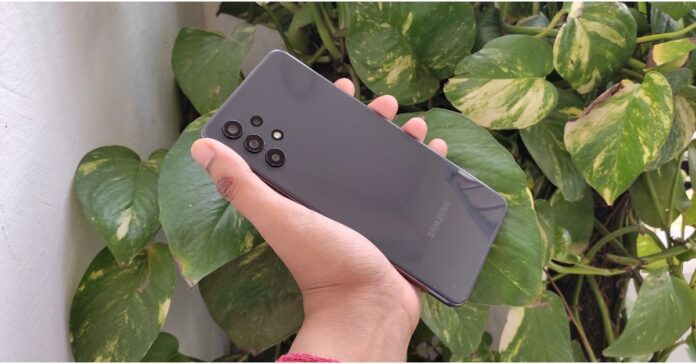 Earlier last month Samsung introduced the Galaxy A32 in the Indian market. The device is available in 2 variants — 5G and 4G. The 5G variant caters to the Western market, which is basically in the US, Europe and was first introduced in Russia. However, here in India, only the 4G model is available.

The new Samsung A-Series phone comes with an sAMOLED 90Hz display. It runs One UI 3.1 on top of Android 11 and is powered by MediaTek Helio G80 SoC paired with 4GB of RAM with 64GB and 6GB RAM with 128GB storage. Apart from this, the device comes with a refreshed design, soft edges and more.

There is no visible camera module and the camera placement on the smartphone is also quite different from the other mid-range devices that Samsung offers. We have been using this phone for a few days now and here is our Samsung Galaxy A32 review.

Before anything else, let’s talk about the design first. The Samsung Galaxy A32 looks really awesome and it’s certainly well built. We got the glossy Awesome Black colour option for the review, but Samsung offers this handset in three more shades that is Awesome White, Awesome Blue, and Awesome Violet. So which one is the most Awesome for you? Do let us know in the comments section. 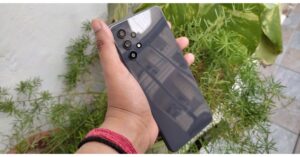 As said, the phone bears a minimalist design with soft edges. The back of the phone has a glossy finish and the new camera setup design is definitely eye-catching. Each of the lenses sits individually with raised edges. So, the rear panel design makes it stand out from the smartphones by the company, which comes in this price range. The glossy rear does attract lots of fingerprints so you need to keep a cloth handy to wipe the surface. A lot of phones these days come with a protective case bundled in the box but sadly you get no such thing with the Galaxy A32.

Moving on, the device has a lightweight build as the back is plastic. In fact, the frame of the A32 is also made of plastic and not metal, but with a glossy finish. 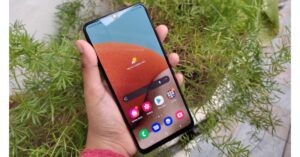 The power button and the volume rocker is given on the right side of the frame and on the other side a sim card slot is placed. While the USB-C port, the headphone jack, a single firing speaker and a primary mic sit at the bottom of the phone, a secondary mic is placed at the top. Instead of a side-mounted fingerprint sensor like in the Redmi Note 10, Samsung has gone for an under-display sensor, however, it’s not the fastest, but gets the job done.

Samsung Galaxy A32 is the company’s first non-flagship phone that comes with a 6.4-inch full-HD Super AMOLED display. It comes with a higher refresh rate screen of 90Hz, which is great considering the price point it is available at. It comes with a peak brightness of up to 800 nits and a 20:9 aspect ratio. However, there are 120Hz displays now available from its competition in the same price bracket. Speaking of the performance of the display, it offers a really nice contrast level and sufficient brightness. Sadly, this phone does not have HDR support. Thus, you won’t get HDR streams on any of the OTT platforms including YouTube. 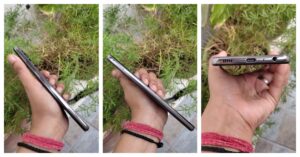 The touch response is impressive. Moreover, there is a U shaped cut out to play house to the selfie camera, but come on, it’s 2021 and the company should have gone for the infinity O-design, which we love in some of its bigger siblings. But that certainly is not a deal-breaker. The bezel on the sides is slim with a relatively pronounced chin area. Also, there is no IP rating for water resistance, which is again not a deal-breaker, but many budget phones these days come with the certification.

Now here comes the main thing which is the performance. It is delivered from a MediaTek Helio G80 SoC. It does get your day-to-day tasks done easily. But we did notice a bit of stutter or lag when used intensively. While the unlocking is on the slower side, application update and download are also slow. It should also be noted that this chipset is being used on phones that cost half of what Samsung is asking for the A32. At similar pricing, Vivo is offering Vivo V20 which comes with Snapdragon 720, which offers an AMOLED display, sleek design with glass rear panel and awesome cameras for similar pricing. Which something is asked by many.

Here are the Geekbench 5 benchmarks results:

As a result, gaming is not the best experience on this phone. We did try a few games and as you can imagine the phone’s performance was not up to the mark thanks to the Mediatek chipset. We played COD on medium graphics and high framerates. We saw a lot of constant frame drops and the overall gaming performance is not smooth at all, which is a bit disappointing. But hey, Samsung is not promoting it as a Gaming smartphone so no points cut there.

Speaking of the software, the device runs One UI 3.1 based on top of Android 11, which is good to see as many of the brands are still not offering Android 11 and are promising it with future updates. So here you get all the Android 11’s regular features. However, the South Korean company also promises three major updates with 4 years of security patches. 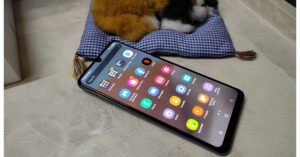 You get easy to understand always-on display settings. Notably now when you pull the notification scroll it now covers the entire display even when there is no notification or just one. Moreover, now you don’t get to see the Notification history, but make sure it is turned on as it comes off by default. In addition to the Smart pop-up view, the device comes with Bubbles to handle notifications from messaging apps. You can turn either of them from the Floating Notifications. Other things like the Game launcher is a good feature for those who do not want any distractions during gameplay.

Besides this, Samsung also offers things like secure folders along with Samsung Knox security, which is good to see at this price point if you really want to keep your data private and secure. While the audio quality is now great as like most of its non-flagship here also Samsung gives you a single loudspeaker that gets the job done.

In terms of cameras, the Samsung Galaxy A32 is endowed with a quad-camera setup that includes a 64-megapixel primary camera with f/1.8 aperture, an 8-megapixel ultra-wide-angle lens with 123-degrees of FoV, a 5-megapixel macro sensor and a 2-megapixel depth sensor. For taking selfies, there is a 20-megapixel front-facing camera. 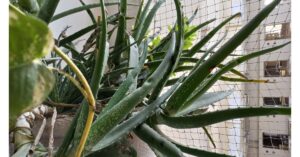 The overall performance of the cameras is good, it delivers punchy colours, great dynamic range in daylight conditions. The colour contrast is a bit boosted but is all right. However, the ultra-wide-angle lens did struggle in capturing dynamic range and could not match the colours when compared to the primary sensor. So most of our camera play was around the primary sensor, which we loved! 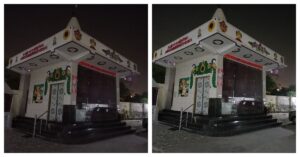 During low light conditions, you get a dedicated night mode and it does help a lot when compared to when the feature is off. But we did notice a bit of grain in the night shots, which is acceptable as ISO kicks in. We were really impressed with the macro shots because it delivers a detailed and natural bokeh effect in the images. 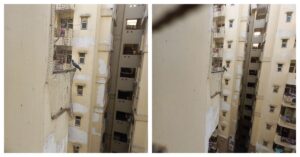 On the flip side, users cannot record a 4K video with this smartphone, which came across as strange. Maybe a future update will take care of the issue and we can record videos in 4K mode. Right now users would need to use the FHD mode for videos.  .On the battery front, Samsung Galaxy A32 comes with a 5,000mAh battery, which is the largest that you get at this price point by the company. The battery gets you through the day, even if you are a power user. You get a 15W charging adapter in the box that takes two hours to charge the phone. We personally would have liked to see a 25W charger in the box. 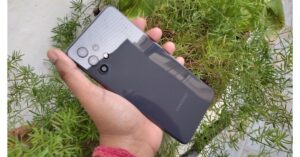 All in all, this smartphone left us with a mixed bag of feelings. The battery backup is average and the charging is also slow. The phone’s unlock features are also slow, too. All this because of the Mediatek Chipset. But what is great is its rear cameras and display. If you want good cameras and a bright, crisp display, with very modern looks, you can go for this smartphone. For gaming enthusiasts, you can look elsewhere.

- Advertisment -
Earlier last month Samsung introduced the Galaxy A32 in the Indian market. The device is available in 2 variants -- 5G and 4G. The 5G variant caters to the Western market, which is basically in the US, Europe and was first introduced in Russia....Samsung Galaxy A32 review: Great design and decent cameras