Vivo V21 5G to officially launch in India on April 29, a dedicated page on Flipkart now confirms the launch 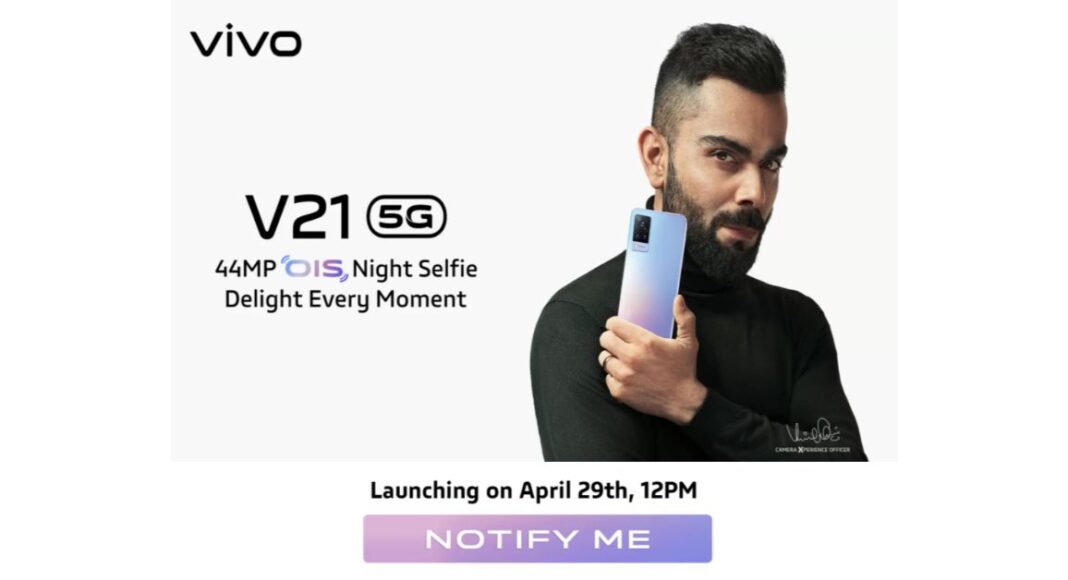 Recently Vivo teased to launch its next generation of V-Series smartphone in Malaysia to be held on April 27. The India launch was also tipped at the same time, however, the company didn’t reveal any information on this. Now Vivo has officially made an announcement on the Vivo V21 5G in India. The phone has been listed on Flipkart while highlighting the specification of the upcoming phone. As always the new 5G smartphone will come with an upgraded rear camera set up as well as the selfie camera.

Vivo V21 5G has been confirmed to launch in India to happen on April 29. The exact launch date for India has been tipped through the Flipkart listing. The launch of the smartphone will take place at 12 noon and will be available for purchase via the e-commerce website when it launches in India. Although the pricing still remains confidential but it is expected to be a bit on the higher side than the Vivo V20 2021 smartphone which now comes at Rs 22,990.

Your night selfies won’t be the same with #vivoV21, the slimmest and lightest phone in town with 44MP OIS Night Selfie.

Coming to you on the 29th of April, 2021 at 12 PM. Let's #DelightEveryMoment pic.twitter.com/cigzXRIEMi

As far as the specifications are concerned, the dedicated microsite reveals that the Vivo V21 5G will come in sunset dazzle and arctic white colour options. Whereas the body thickness and the weight will be 7.39mm and 177g. In addition to this, a third dusky blue colour edition of V21 is 7.29 thick and 176g. The Vivo V21 series looks similar to its predecessor however it will feature an ultra-slim matte glass design.

The listing further reveals that the next generation of the Vivo V-Series smartphone will feature a 44-megapixel selfie camera with optical image stabilisation (OIS) and a waterdrop-style notch display. For the low light selfies, the device is also provided with a dual spotlight flash. The rear panel will include a triple rear camera set up that will sport a 64-megapixel primary lens with optical image stabilisation (OIS).

Over that, the device is teased to be offered with an extended RAM option in order to maximise the phone’s potential and run apps at a faster speed. However, there is no mention of the configuration but if we look at the Malaysian listing the phone will be offered with 8GB of RAM along with an additional 3GB of virtual RAM.

Previously, the India tipster Mukul Sharma also spotted Vivo V21 SE on Google Play Console with model number V2061. According to him, the alleged smartphone will be powered by Qualcomm Snapdragon 720G SoC paired with 8GB of RAM and will run Android 11 out of the box. In addition to this, it could feature a  full-HD+ display with 1,080×2,400 pixels of resolution.

Komila Singhhttp://www.gadgetbridge.com
Komila is one of the most spirited tech writers at Gadget Bridge. Always up for a new challenge, she is an expert at dissecting technology and getting to its core. She loves to tinker with new mobile phones, tablets and headphones.
Facebook
Twitter
WhatsApp
Linkedin
ReddIt
Email
Previous article
iQOO 7 5G launch event to take place today: How can you watch the live stream?
Next article
Pulse oximeter buying guide: What you must beware of before buying a pulse-oximeter?