Vivo V21 Series set to launch in India today: Here is what to expect and how to watch it live

How to watch the launch event live 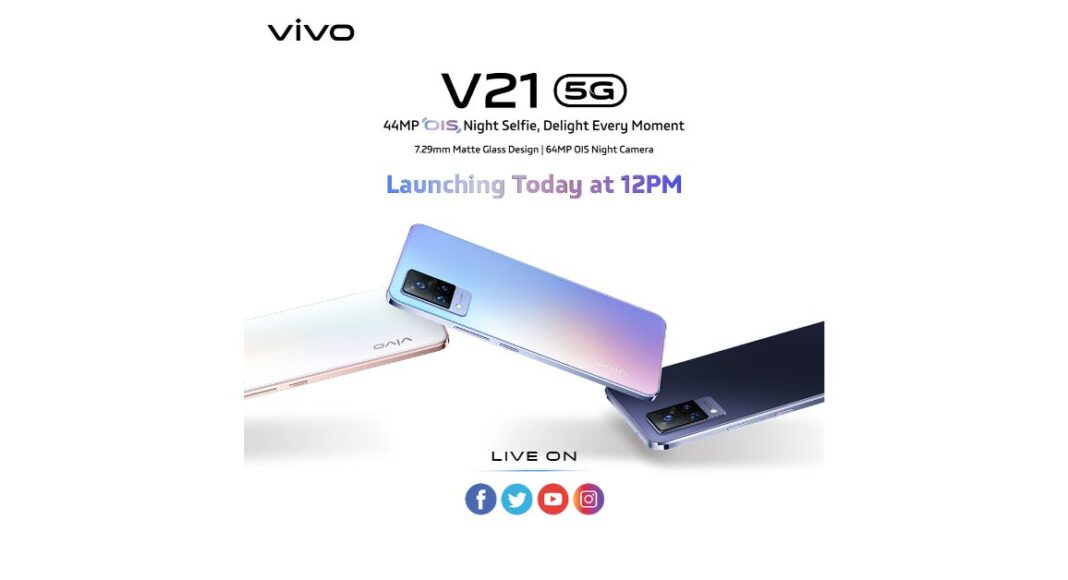 After launching Vivo V21 Series in the Malaysian market, the Chinese smartphone company, Vivo, is all geared up to unleash Vivo V21 5G in the country today. It should be noted that at present it is going to only bring the 5G variant to the Indian market whereas the rest of the smartphones are expected to arrive sometime later. The device will be offering a 90Hz refresh rate screen with a triple rear camera set up. Moreover, it will be powered by octa-core MediaTek Dimensity 800U SoC.

Vivo V21 how to watch the Livestream and expected pricing

Today the company will be hosting a virtual launch event to announce the arrival of its new phone Vivo V21 5G in India. The launch will kick start today at 12 noon and will be live-streamed via the company’s official YouTube Channel and across all its social media channels including Facebook and Twitter. You can also watch it here on our website as we have embedded the link below.

Ahead of the launch the device also got listed on Flipkart to reveal its online availability. The pricing of the smartphone has been kept confidential but the mobile phone is expected to be pricier than its predecessor.

As the upcoming smartphone has already been launched in the Malaysian market so we are well aware of its specifications. The Vivo V21 5G will ship Funtouch OS 11.1 on top of Android 11 out of the box. This smartphone has a 6.44-inch full-HD+ AMOLED display with 1,080×2,404 pixels of resolution and a 90Hz refresh rate. Under the hood, there will be an octa-core MediaTek Dimensity 800U SoC.

For the optics, it will sport a  triple rear camera setup that includes a 64-megapixel primary sensor with an f/1.79 aperture. In addition to this, there is an 8-megapixel wide-angle lens and a 2-megapixel macro sensor. For taking selfies, the device will house a 44-megapixel front-facing camera with a dual-LED flash.

The Vivo V21 5G will packs a 4,000mAh battery with 33W FlashCharge fast charging support. The connectivity options on the phone include 5G  4G LTE, Wi-Fi, Bluetooth v5.1, GPS/ A-GPS, and a USB Type-C port. The sensors onboard include an in-display fingerprint sensor,  accelerometer, ambient light, gyroscope, magnetometer, and a proximity sensor.

Komila Singhhttp://www.gadgetbridge.com
Komila is one of the most spirited tech writers at Gadget Bridge. Always up for a new challenge, she is an expert at dissecting technology and getting to its core. She loves to tinker with new mobile phones, tablets and headphones.
Facebook
Twitter
WhatsApp
Linkedin
ReddIt
Email
Previous articleApril 29 Flipkart Daily Trivia Quiz Answers: Answer to win exciting prizes
Next articleNetflix rolls out the Play Something button globally for its TV app, will recommend content to watch

Komila Singh - Jul 6, 2022 0
The Redmi K50i 5G launch has been scheduled for July 20 in India. Besides confirming the India launch date, the company has not yet...

What Does ‘Lock the Taskbar’ Mean in Windows?