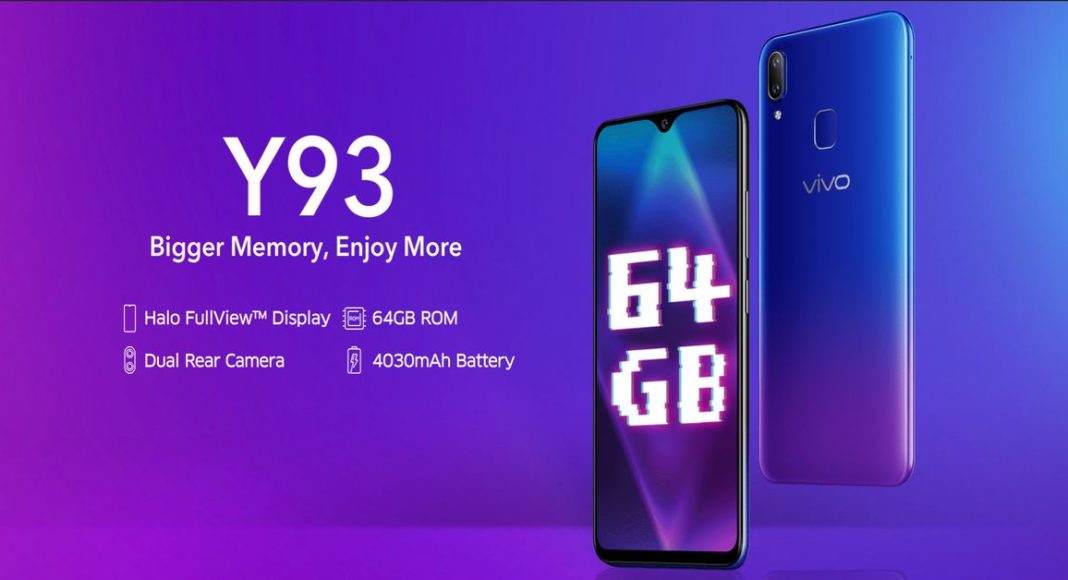 Vivo’s mid-range smartphones Y93 and Y95 were launched in the later months of 2018 in India. And just a few months after their launch, the Chinese smartphone brand is offering a price cut on the Vivo Y93 and Y95 smartphones. The prices of the 3GB and 4GB variants of the Vivo Y93 along with the Y95 have been reduced as per company’s announcement today. The price cut can be availed on online stores as well as via offline retailers. The online prices of the smartphones are yet to be updated but in the offline market, the smartphones are being sold at discounted prices already.

After the discount, Vivo Y93 with 3GB RAM and 32GB storage can be picked up at Rs 11,990 while the 4GB RAM and 64GB storage variant of the smartphone is selling for Rs 12,990. Originally, the two variants of the smartphone held a price tag of Rs 12,990 and Rs 13,990 respectively.  On the other hand, the Vivo Y95 is available for Rs 14,990 after discount, and originally it was selling for Rs 15,990. As mentioned above, the online shopping platforms are yet to revise their prices of the smartphones while the offline retailers are selling the handsets at discounted rates already.

Vivo Y93 was launched in India in December of 2018. The smartphone sports a 6.2-inch HD+ (720 x 1580 pixels) resolution Halo FullView display with an aspect ratio of 19:9. It is powered by MediaTek Helio P22 SoC coupled with 3GB or 4GB of RAM and packs a 4,030mAh battery. The smartphone runs Android 8.1 Oreo skinned with FunTouch OS 4.5 UI. On the camera front, there is a dual-rear camera setup comprising of a 13MP primary sensor with f/2.2 aperture paired with a 2MP secondary sensor with an f/2.4 aperture. At the front, there is an 8MP selfie camera with an f/1.8 aperture.

Aman Singhhttps://www.gadgetbridge.com/
Aman Kumar Singh has a Masters in Journalism and Mass Communication. He is a journalist, a photographer, a writer, a gamer, a movie addict and has a love for reading (everything). It’s his love of reading that has brought him knowledge in various fields including technology and gadgets. Talking about which, he loves to tweak and play with gadgets, new and old. And when he finds time, if he finds time, he can be seen playing video games or taking a new gadget for a test run.
Facebook
Twitter
WhatsApp
Linkedin
ReddIt
Email
Previous articleApple to increase the price of select iPhones in India: Report
Next articleApple’s latest iPhone ad emphasizes that ‘privacy matters’