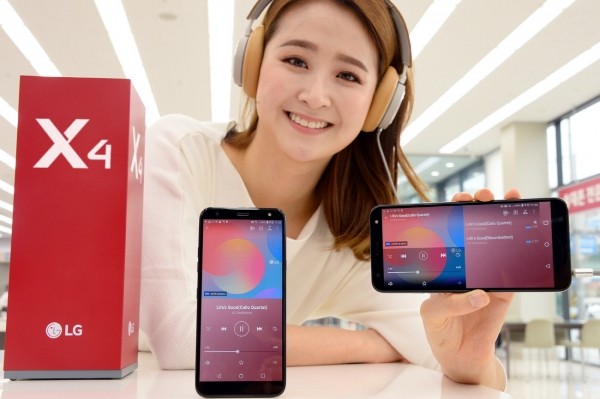 After being absent from the mid-range smartphone segment for a while, LG is making its come back with the launch of a new device for its home market called LG X4 (2019). The newly launched X-series device from LG is meant for the audiophiles and music lovers as the X4 comes equipped with the Hi-Fi Quad DAC.

This feature is used in the upper range and flagship smartphones of the company but now the South Korean technology company is bringing it to the mid-range devices as well. The LG X4 (2019) comes with the MIL-STD 810G-certified build and has a 16MP back camera with AI features. According to the company, the LG X4 (2019) is the official successor of the LG X4. Here’s everything you need to know about the newly launched smartphone:

LG X4 comes as a Korea-only variant because as of now, it has been launched in the company’s home country only. The LG X4 (2019) has a price tag of KRW 2,97,000 (approximately Rs 18,000) and it will be available on all the local carriers from April 26 onwards. The smartphone comes in two colour options – New Platinum Gray and New Aurora Black.

As of now, there is no word from LG about the launch of its X4 smartphone in markets other than its home country.

The LG X4 (2019) sports a 5.7-inch HD+ (720 x 1440 pixels) display with an aspect ratio of 18:9 and it is powered by an octa-core MediaTek Helio P22 (MT6762) SoC. It comes with 2GB of RAM and 32GB of inbuilt storage. LG X4 (2019) runs Android 8.1 Oreo and it supports dual-SIM cards (Nano). As mentioned above, the LG X4 (2019) comes with Hi-Fi Quad DAC support which gives it a superior music and audio listening experience. Other than that, the handset also comes with the DTS:X support (7.1 channels) which according to LG, delivers a stereophonic audio experience with headphones. The LG X4 (2019) packs a 3,000mAh battery and comes with a rear-mounted fingerprint scanner.

On the camera front, the LG X4 (2019) comes with a 16MP primary rear camera packing features such as PDAF, AI Camera, and Time Helper. On the front, there is an 8MP selfie camera with an f/2.0 aperture paired with front LED flash. The camera app of the LG X4 (2019) comes with AI support that helps the users to adjust the image settings for eight different subjects while optimising the overall quality. Also, it comes with Google Lens integration and also supports LG’s own digital payments app called LG Fee.

Aman Singhhttps://www.gadgetbridge.com/
Aman Kumar Singh has a Masters in Journalism and Mass Communication. He is a journalist, a photographer, a writer, a gamer, a movie addict and has a love for reading (everything). It’s his love of reading that has brought him knowledge in various fields including technology and gadgets. Talking about which, he loves to tweak and play with gadgets, new and old. And when he finds time, if he finds time, he can be seen playing video games or taking a new gadget for a test run.
Facebook
Twitter
WhatsApp
Linkedin
ReddIt
Email
Previous article
Huawei’s EMUI 9.1 Public Beta is now available on four smartphones, 49 devices to receive the new update
Next article
Samsung launches its SpaceMax series of side-by-side refrigerator in India