OnePlus Nord CE 5G set to launch in India today: How to watch the live stream

Alongside its latest smartphone, the company will also launch the OnePlus TV U series in the country today. 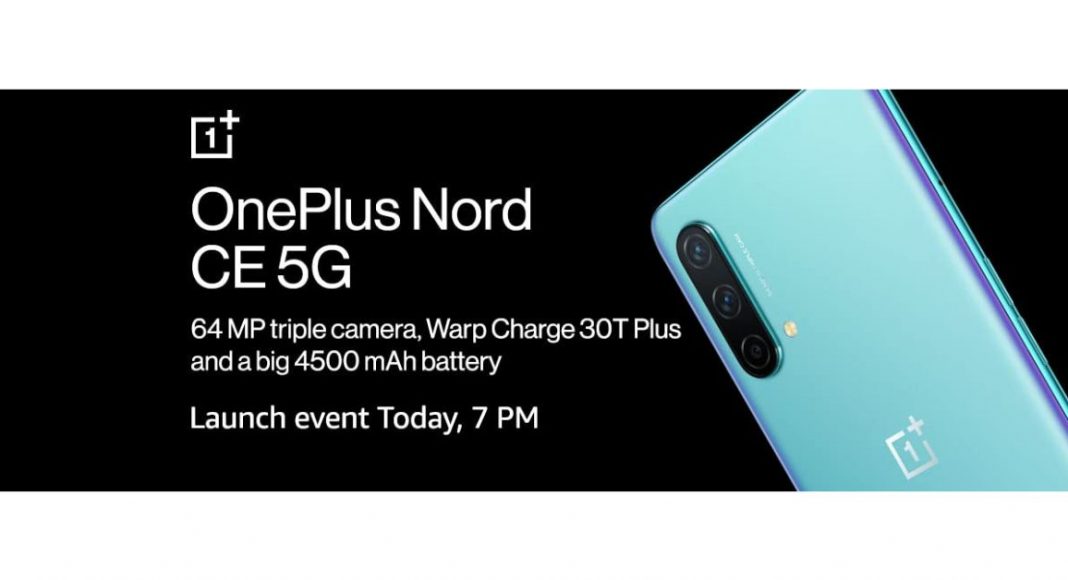 Today, OnePlus is officially going to make the announcement of the unveiling of the OnePlus Nord CE 5G in India. The much-awaited smartphone is the successor to the OnePlus Nord N10 5G however its specs are derived from the first generation of the OnePlus Nord.  The CE in its name stands for Core Edition which indicates it would bring some additional specs. Alongside the handset, the company is also going to launch the OnePlus TV U series. Both the upcoming devices have long been rumoured and have also appeared a couple of times via leaks and other mediums on the internet.

The company will be launching the OnePlus Nord CE 5G via an online presentation that will begin at 7 pm IST Livestream on the OnePlus official website and YouTube. If you are interested then you can watch the event live here on our website as we have embedded the link below for your convenience:

What about the price of the OnePlus OnePlus Nord CE 5G and  OnePlus TV U series?

The company has not yet revealed nor hinted at the pricing of both the smartphone and the Smart TV. But as per a tipster the price of the Nord CE 5G will start at Rs 22,999 in India. He has further revealed the additional launch offers that include Rs 1,000 off to the HDFC Bank customers.

What about the tech specs?

Speaking on the specifications, features, and other details, what we know so far is based on the leaked details. As per a recently leaked video of the OnePlus Nord CE 5G the device would be powered by Qualcomm Snapdragon 750 SoC. In addition to this, there will be an Always-on AMOLED display with a 90Hz refresh rate featuring a single hole-punch cutout for the selfie camera. Previous leaks suggest that the handset will arrive in India in two colour options of Blue Void and Charcoal Ink.

Whereas the official teasers suggest that the OnePlus Nord CE 5 Will bring a hole-punch design display along with a 64-megapixel primary sensor at the back. Teasers also revealed that the phone would be 7.9mm thick and come with a 3.5mm headphone jack, USB Type-C port as well as a microphone.

On the other hand, the OnePlus TV U series is expected to be available in India in three different variants with different sizes that will include 50-inch, 55-inch, and 65-inch size models. According to a tipster the top variant will be incorporated with quad-speakers whereas the base versions will pack a dual-speaker setup. Additionally, all three models will be available in Ultra-HD (4K) resolution with HDR10+ support. These models will be running Android TV 10 out-of-the-box. Also, the OnePlus TV is said to be supported by built-in Chromecast, Multicast, Google Assistant, Alexa for voice control and OnePlay 2.0 with Live Channel.

According to leaks, there will be a 30W Dolby Audio system on the Television and these will be backed by 2GB RAM and 16Gb storage. For connectivity, there will be three HDMI ports, two USB ports, dual-band Wi-Fi, Bluetooth, and NFC.

Komila Singhhttp://www.gadgetbridge.com
Komila is one of the most spirited tech writers at Gadget Bridge. Always up for a new challenge, she is an expert at dissecting technology and getting to its core. She loves to tinker with new mobile phones, tablets and headphones.
Facebook
Twitter
WhatsApp
Linkedin
ReddIt
Email
Previous article
June 10 Flipkart Daily Trivia Quiz Answers: Answer to win exciting prizes
Next article
Honor Band 6 with SpO2, heart rate meter and sleep monitor launched in India