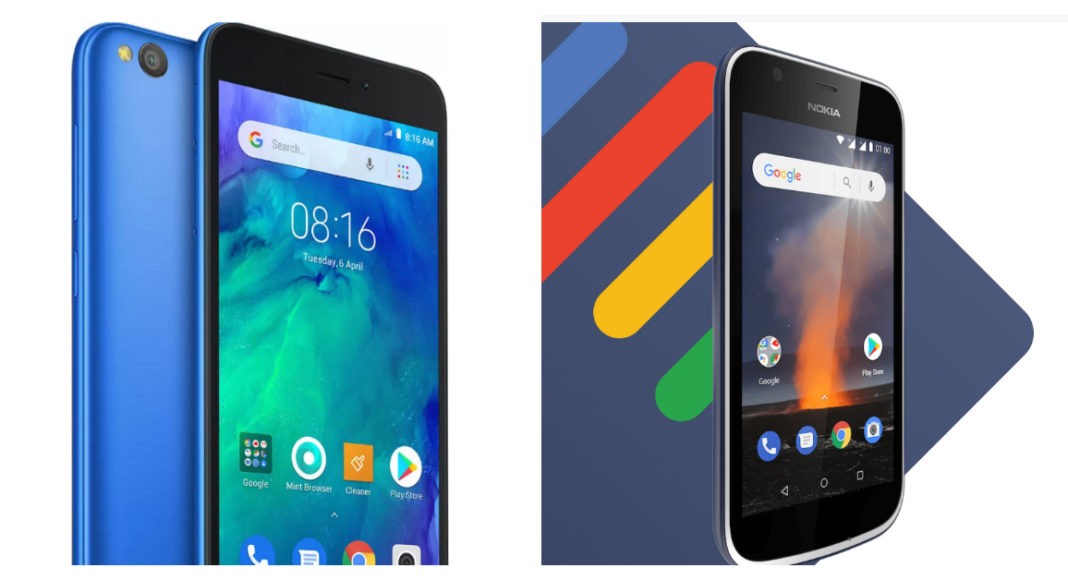 Xiaomi has today launched its most affordable smartphone in India – Redmi Go. The handset runs Android 8.1 Oreo (Go Edition) and competes with other entry-level smartphones in the Indian smartphone market. Considering its price, the closest competitor of the Redmi Go is Nokia 1 which offers similar specifications. The Nokia 1 was launched way back in March 2018. But, even though the Nokia 1 is one year old, it offers similar performance and has a very similar specification sheet as the newly launched Redmi Go. It is fair that everyone has the Redmi Go vs Nokia 1 comparison on their minds.

It should be noted that both these smartphones are aimed for the first-time Android smartphone users so they offer specifications which proves ample for the simple day-to-day use. Nokia 1’s successor – Nokia 1 Plus –  has recently been launched at MWC 2019. Although some may argue that Nokia 1 Plus would have been a more eligible competitor for the Redmi Go, the smartphone has not been launched in India yet so we don’t know about its pricing details.

Here, we are comparing the Redmi Go with the Nokia 1 so that you will have an easy time deciding which smartphone to go for:

On one hand Redmi Go offers a good set of specifications and on the other hand, Nokia 1 is made by HMD Global, which is known to roll out timely Android updates and security patches. Redmi Go and Nokia 1 offers similar specifications in the same price range. It can be said that they both are the cheapest offering in the smartphone segment from Xiaomi and HMD Global. Both are priced at the sub-5K price segment and are a part of Google’s Android Go program. And in the end, it all comes down to choices and personal preference, people can either go for the Snapdragon offered by Redmi Go or they can opt for MediaTek offered by Nokia 1.

Aman Singhhttps://www.gadgetbridge.com/
Aman Kumar Singh has a Masters in Journalism and Mass Communication. He is a journalist, a photographer, a writer, a gamer, a movie addict and has a love for reading (everything). It’s his love of reading that has brought him knowledge in various fields including technology and gadgets. Talking about which, he loves to tweak and play with gadgets, new and old. And when he finds time, if he finds time, he can be seen playing video games or taking a new gadget for a test run.
Facebook
Twitter
WhatsApp
Linkedin
ReddIt
Email
Previous articleRedmi Go smartphone with Android Go, 3,000mAh battery launched in India: Price and specifications
Next articleOppo AX5s is now listed officially on the company’s Taiwan website