Skullcandy Indy earbuds comes with touch controls on each side 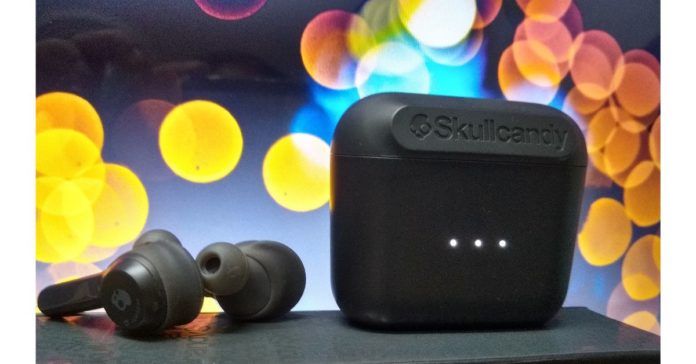 We have always liked music, and since headphones and earphones can give you much better audio quality than speakers, as well as it gives you the ability to enjoy listening to music without troubling others, we love them even more. So, when we received the Skullcandy Indy wireless earbuds the first thing that came to our mind is that these earphones are small, light and they are portable. Skullcandy Indy wireless earbuds don’t take much space in your bag for storage. 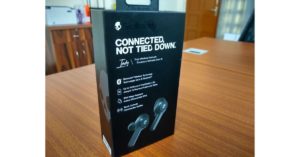 So, before we talk about the looks of the wireless earphones by Skullcandy let’s take a look at what comes inside the black box. Inside it comes a user guide, a micro USB cable and various gel tips size small, medium and large. The flap has instructions no how to pair the device and it talks about volume up, next track, playing and pause. The device supplies four hours of listening time and 16 additional hours can be supplied with the case. It takes one hour to fully charge. Over that, ten minutes of charge gives you 1.2 hours and the case takes two hours to fully charge. It uses Bluetooth 5.0 with more than 30 feet of range.

Skullcandy Indy has touch controls for access. Micro USB for charging and it has IP55 sweat, water, and dust resistance. The case is fairly light and is made of plastic all around. It has the Skullcandy branding on the front of the case and the facade of the case also has LED charge status along with the Micro USB charging port at the bottom. Opening the lid, you will see a light upon the front along with the earbuds placed securely inside the case. They are held into place by magnets. The lid opens and closes firmly and the earbuds are light as they are made of plastic. 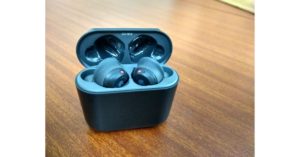 Controlling the earbuds is done by the touch controls on each side.

Tap once for volume up, tap two times for play and pause, hold down two seconds for next track, holding down both earbuds for three seconds will allow you to pair it.

Tap once for volume down, hold down for 2 seconds for the previous track.

So, we have been using this out for a few days now. So, after using it for a week here is what we think about the Skullcandy Indy wireless earphones performance.

The Skullcandy Indy has a good range. The earphones can be used both stereo or in mono modes. If you want to use the earphones in mono then it will have to be on the right side because the right earphone is the master.

The earbuds come with various ear tip sizes that are helpful for proper fitting. The stability gel adds additional support that makes it feel secure while wearing. The built quality is decent and seems durable, but it does not look elegant as not the best plastic has been used on it. 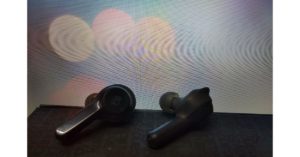 Coming to the sound, while using the Skullcandy Indy’s we felt that the sound is not that great as we expected. We expected a bit more bass. It provided enough of the lows but not deep sounds were missing. The sound quality was painfully sharp, too. Like other brands, it has no companion app to adjust the bass or treble or to customize the sound according to our liking. We had to keep adjusting the Skullcandy Indy as it doesn’t fit our ears well and at times we felt it will fall off, thankfully they did not.  Even when we did try them on with three different sizes of ear tips that they have. As a default, they came fitted with the medium size ones.

We tried the larger, then the small ones, but the fear of them falling still loomed. At times they just came out a bit of the ear cavity, sort of hanging in there, which makes the audio not sound as nice. On the brighter side, they can be used easily while working out as they are IPX4 rated and are sweat and water resistant.

We would have liked to see the voice assistant integrated into the touch controls and also being able to go mono on either earbud would have been nice not just the right side. They can be used for everyday casual listening. The deal breaker for us was the audio syncing with the Bluetooth. With the Skullcandy Indy’s, as we were watching a movie on the phone the audio was maybe half a second off and that got a bit annoying for us. The device also gets disconnected when the connection gets disrupted when we covered our ears with hands or when the device has cover or hood on top of it

Can be used casually

The sound is not so great

Does not look elegant as cheap plastic has been used. 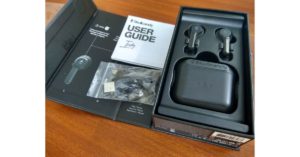 WHAT’S IN THE BOX?

- Advertisment -
We have always liked music, and since headphones and earphones can give you much better audio quality than speakers, as well as it gives you the ability to enjoy listening to music without troubling others, we love them even more. So, when we received the Skullcandy...Skullcandy Indy truly wireless earbuds review: The touch-sensitive earbuds