Poco M2 to launch today: Here is how to watch the Livestream

The device is going to pack a 5,000mAh battery 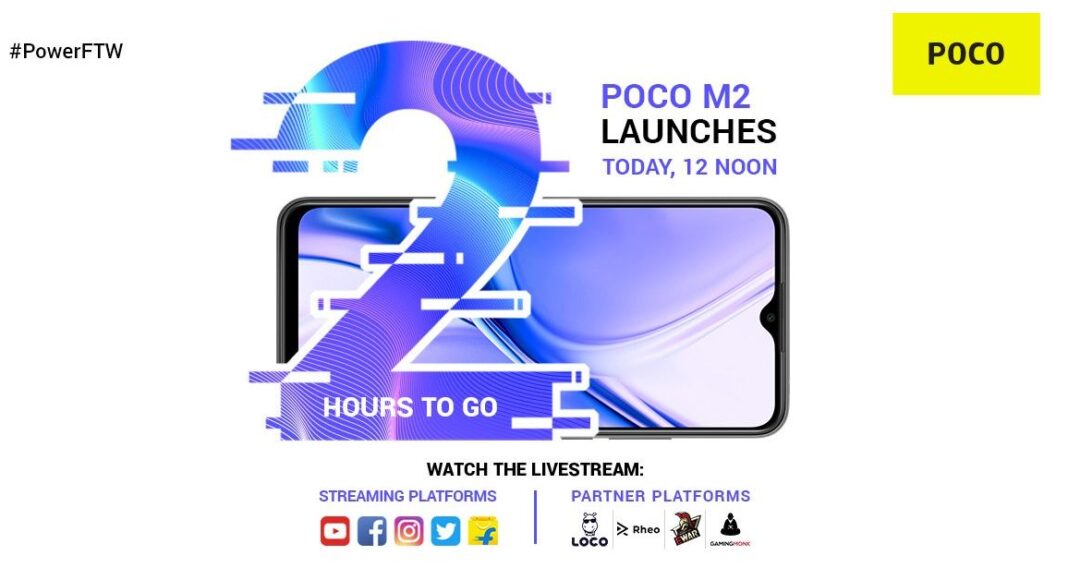 A day before Poco X3 NFC launched globally. And today the company is all set to launch another new device but in India. The Xiaomi’s spin-off will be unveiling Poco M2 which is going to be a toned-down version of Poco M2 Pro which was brought a few months back in the Indian market. The device will come with a waterdrop-style notch design as well as a full-HD+ display. Prior to its official launch, Poco M2 has been listed on Flipkart to reveal its availability. The company has created a dedicated microsite for the smartphone that has disclosed its key specification. Now the company is going to launch it today lets see how you can watch the launch stream.

Poco M2 how to watch Livestream and expected pricing

As per the Flipkart teasers, the company is going to launch Poco M2 today in India. It is going to host an online launch event to unveil the device that will begin at 12 noon onwards. The Livestream will be aired across all the company’s social media channels via the official YouTube channel. For your convenience, we have embedded the link below.

In terms of pricing, the company is going to reveal it at the official launch today. As Poco 2 is the watered-down variant of the Pro model the pricing will be on the lower side. The pricing is likely to start at Rs 13,999.

Since the Poco M2 will likely be a toned-down version of the Poco M2 Pro it would miss out on some of its important features. But the teasers reveal that the phone will come with 6GB of RAM. Though the pro variant packs a 6.67-inch full-HD+ display with 1,080×2,400 pixels of resolution and the M2 is likely to have a screen smaller in size but the company reveals it to have a full-HD+ display but the exact size and resolution remain undisclosed.

Furthermore, the microsite has revealed that the Poco M2 houses the 5,000mAh battery which is going to last for two days on a single charge. In addition to this, the smartphone will further include quad rear camera setup, along with an LED flash. In addition to this, the handset will include a rear-mounted fingerprint sensor which is placed just below the camera module. As of now, the information is very scarce, we will update it right here on our website as soon as the phone gets official. Stay tuned.

Komila Singhhttp://www.gadgetbridge.com
Komila is one of the most spirited tech writers at Gadget Bridge. Always up for a new challenge, she is an expert at dissecting technology and getting to its core. She loves to tinker with new mobile phones, tablets and headphones.
Facebook
Twitter
WhatsApp
Linkedin
ReddIt
Email
Previous article
September 8 Amazon Quiz: Participate and win Philips Soundbar
Next article
Huawei Y9a with MediaTek Helio G80 SoC and 40W fast charging support launched