Redmi Note 9 and Mi Note 10 Lite to launch today: Here is how to watch the live stream

After a long wait, Xiaomi is today going to launch its new devices in India. The company is going to introduce Redmi Note 9 and the Mi Note 10 Lite. Both the devices will be unveiled via a global online launch event and have been in the news for the past couple of weeks. Last month the company unveiled two devices under the Note 9 series, Redmi Note 9 Pro and Redmi Note 9 Pro Max but the vanilla variant could not make it to the market. Whereas Mi Note 10 series was launched in China a few months back but today one of the devices from the series that is Mi Note 10 is going to arrive in the country today. Whereas the Pro variant might not get launched today instead the company will be launching Mi Note 10 Lite which is a brand new phone ready to be unveiled before the world even before any other market.

Today the Chinese smartphone company Xiaomi has scheduled to host a global online launch for its new upcoming smartphone. In India today the company will be introducing Redmi Note 9 and the Mi Note 10 and Mi Note 10 Lite. The launch event will be live-streamed via the company’s social media accounts as well as the official YouTube channel that will begin at 8 pm GMT +8 (5.30 pm IST). If you don’t want to miss the live-action you can watch it here on our website for your convenience we have embedded the link below.

Just ahead of the launch Redmi Note 9 specifications and renders leaked on the internet. It is suggested to be available in three colour variants with gradient finish Green, Blue and White. The smartphone is said to come with a 6.53-inch FHD+ LCD display with 2340 x 1080 pixels of resolution. It will be powered by MediaTek Helio G85 chipset paired with 3GB and 4GB of RAM options along with 64GB and 128GB of internal storage options. For cameras, there will be a  quad rear camera setup consisting of a 48-megapixel primary sensor with f/1.79 aperture, a secondary 8MP ultrawide angle sensor with f/2.2 aperture, a 2-megapixel macro lens with f/2.4 aperture and lastly a 2-megapixel depth sensor. On the front, it will be expected to feature a 13-megapixel selfie camera. The smartphone will pack a 5020mAh battery with 22.5W fast charging support and will come with an 18W adaptor inside the retail box. 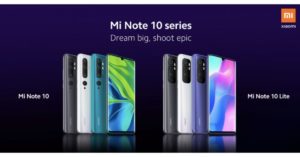 The specifications of the Mi Note 10 Lite also got leaked lately via a Russian e-commerce website. Prior to its launch, the platform listed the device which revealed the smartphone will be featuring a 6.47-inch FHD+ AMOLED curved display with 2340×1080 pixels of resolution and a waterdrop notch. As per the listing, the handset will be powered by Snapdragon 730G processor paired with 6GB RAM and 128GB internal storage. It will pack a 5,260mAh battery with 30W fast charging support. ‘For optics, the device will come with a  quad-camera setup that will include a 64-megapixel Samsung GW1 primary camera, a secondary ultra-wide-angle camera, a 5megapixel macro lens and a 2-megapixel depth sensor. While on the front there is going to be a 32megapixel selfie camera.  For connectivity, it is expected to include Type-C port, 3.5mm audio jack, Wi-Fi, dual SIM support, Bluetooth 5.0, NFC, GPS, DUAL GPS and GLONASS.

Komila Singhhttp://www.gadgetbridge.com
Komila is one of the most spirited tech writers at Gadget Bridge. Always up for a new challenge, she is an expert at dissecting technology and getting to its core. She loves to tinker with new mobile phones, tablets and headphones.
Facebook
Twitter
WhatsApp
Linkedin
ReddIt
Email
Previous article
Samsung Galaxy S20 Ultra Imagination White colour variant with 256GB storage revealed
Next article
Ubisoft’s ‘Assassin’s Creed Valhalla’ to take place in Viking age