Gadget Bridge Awards 2019: Here are all the contenders in each category and other details

These are the first-ever Gadget Bridge Awards, let’s make them special 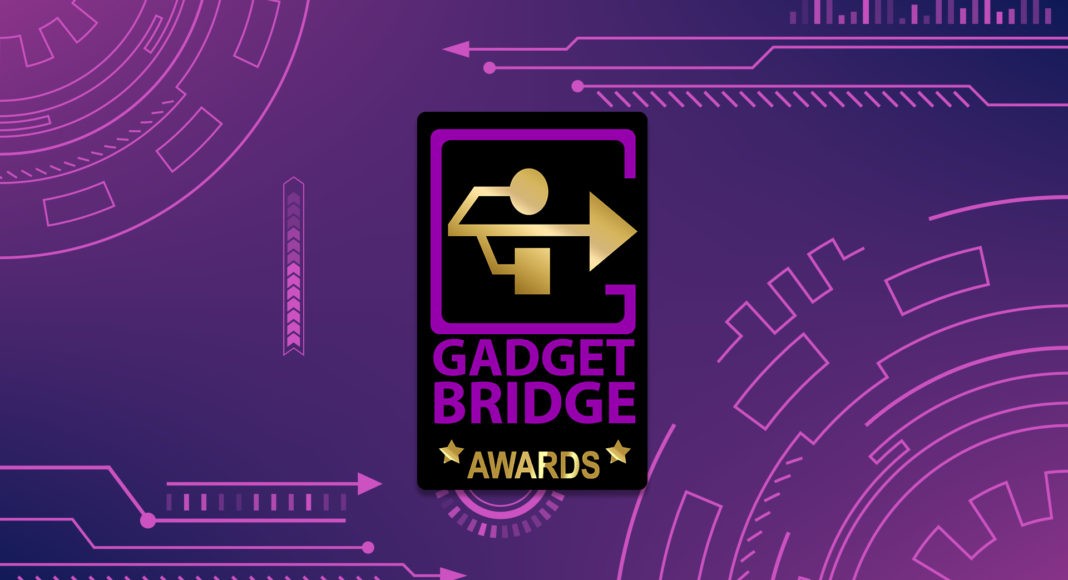 Well, in my previous stints I always wanted to do Gadget Awards. But I guess it did not happen because fate wanted me to do the best one first. This is my, the team’s and Gadget Bridge’s first time of giving out awards and accolades to the worthy in the field of consumer technology (Gadget Bridge Awards 2019). The year 2019 and the last decade saw some great gizmos being launched in the country. India evolved from a caterpillar of a third world country for gizmotics, where gadgets came after 6-9 months of its global launch, into the beautiful butterfly where gadgets are being launched first. We sat down and understood, which categories make the most sense as Gadget Bridge covers all things good (Tech) under the sun, for the #GadgetBridgeAwards 2019. And then we carefully sifted through the various smartphones, TVs, headphones, laptops etc, which we have used, reviewed, unboxed and/or experienced during 2019.

We have a lot of great award categories and two special sections of awards where we will need your help. Yes, you the viewers and avid readers of Gadget Bridge will be needed to vote for the Gadget Bridge People’s Choice Awards 2019. And as always, we believe in spreading the joy, so a #GadgetBridgeGiveaway is also part of this awards ceremony for the readers/viewers who participate in the voting. More details can be found here. The voting is live (you can vote here) on GagdetBridge.com as well as our Twitter page on two posts here and here. In the end, the total votes from Gadget Bridge Twitter and on Gadget Bridge Web will be added and the winners of these categories will be announced. Remember the voting closes by the 18th of December, midnight IST.

So, let’s get to it, here are all the cool categories and the nominees of our first ever #GadgetBridgeAwards. Oh, before that, let’s meet the Gadget Bridge Veterans who will decide the final winners (except Gadget Bridge people’s choice awards). 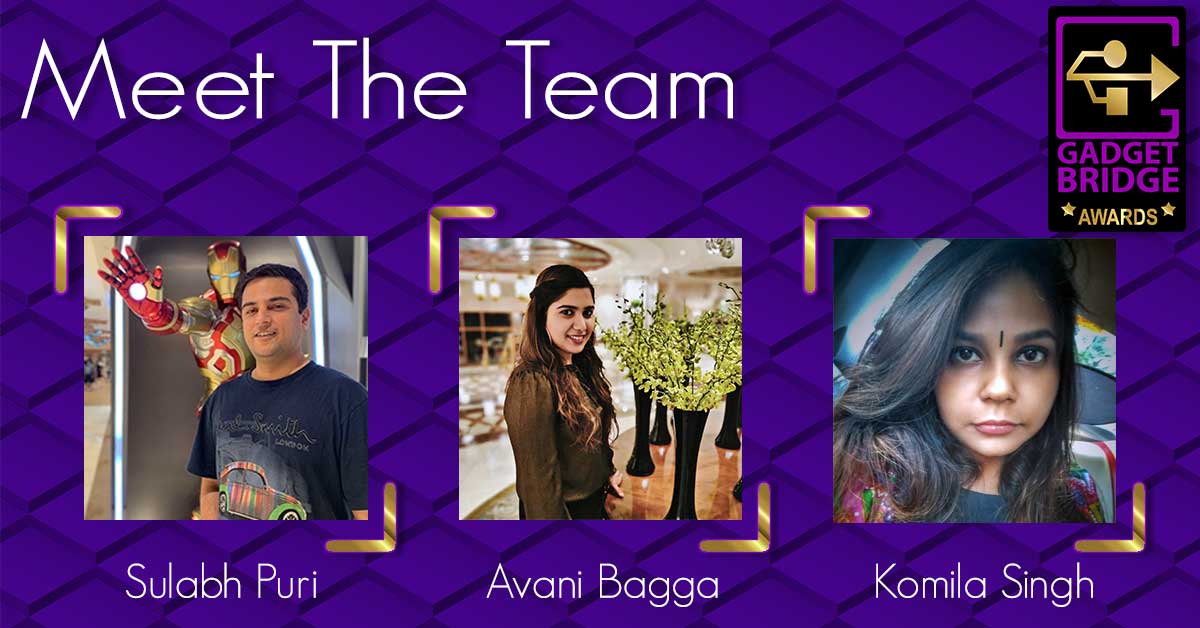 Here are all the categories:

Smartphone of the year 2019

A lot of great smartphones were launched this year that kept us on our toes, during the peak season we saw over 2 smartphones launching every day. 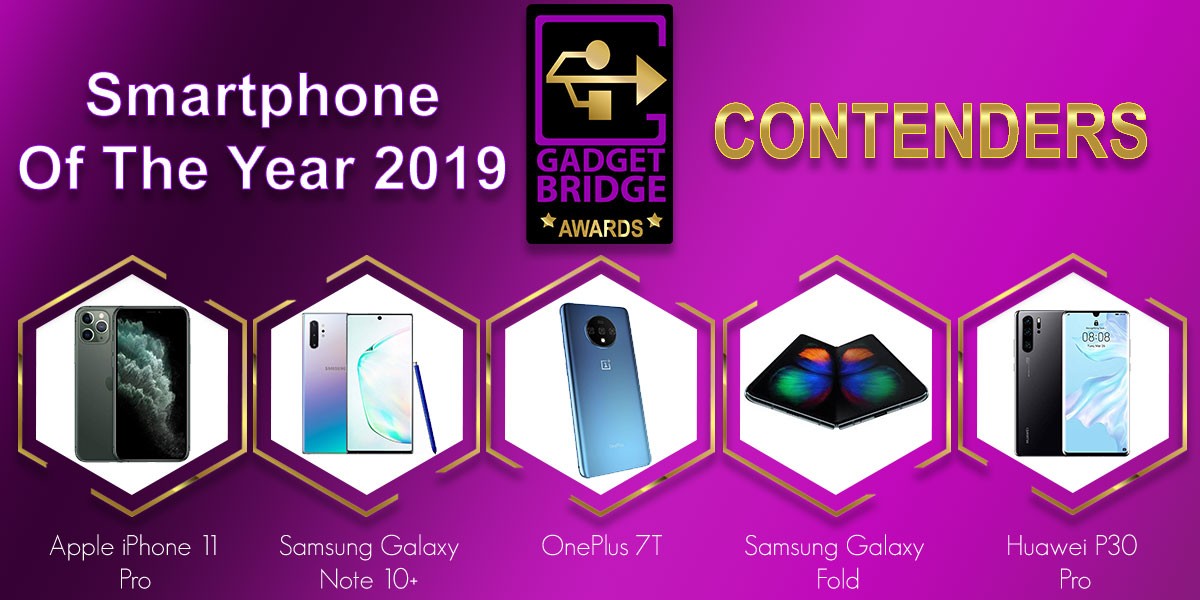 In the year 2019, a flurry of smartphones with great cameras were launched. It was a stiff competition, but here are the big 5. 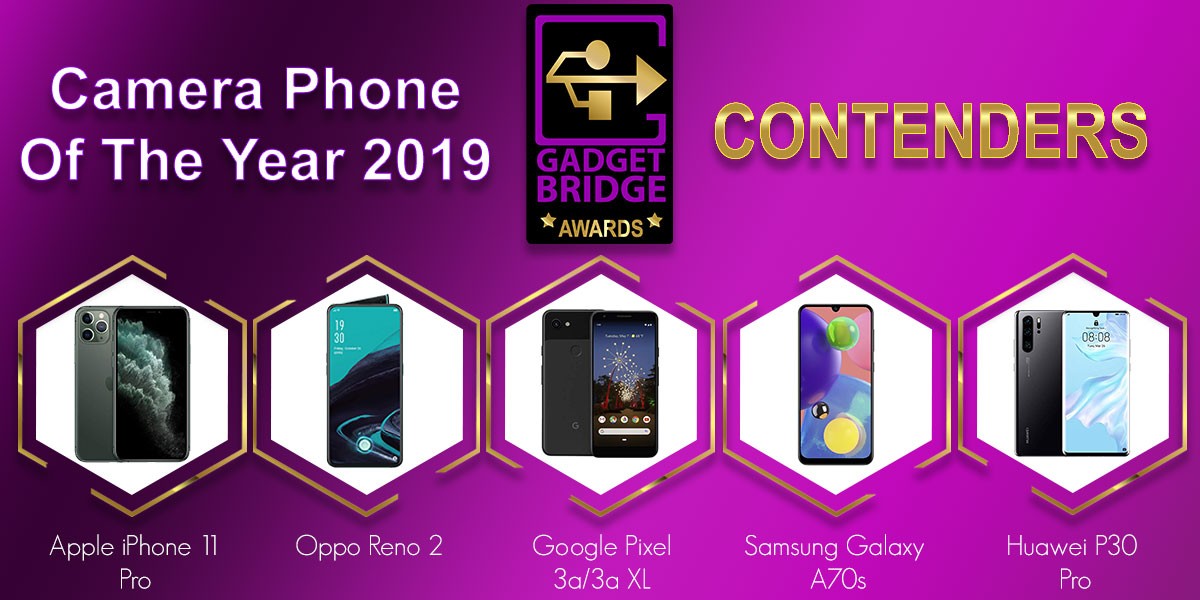 Budget smartphone of the year 2019

This is the most populated category of smartphones. Each day we see a new budget smartphone launch, so deciding was tough. But we powered through and here are the top 5 in the category. 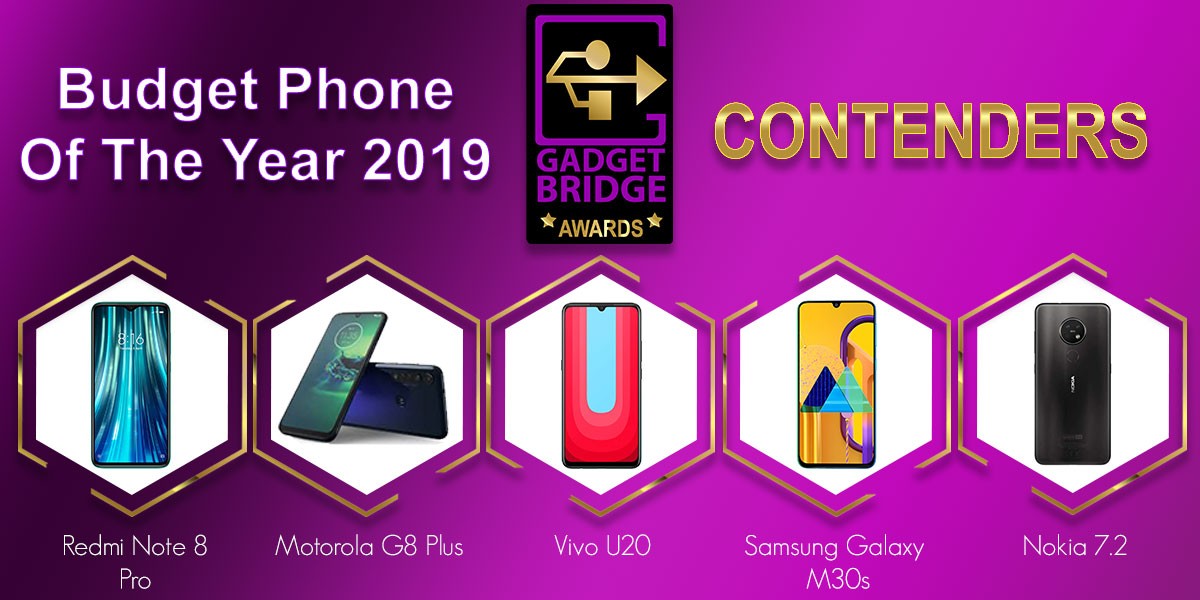 Gaming smartphone of the year 2019

This is one of our favourite categories as it caters to gamers. Some big names out there this time and the fight for the top spot will be close. 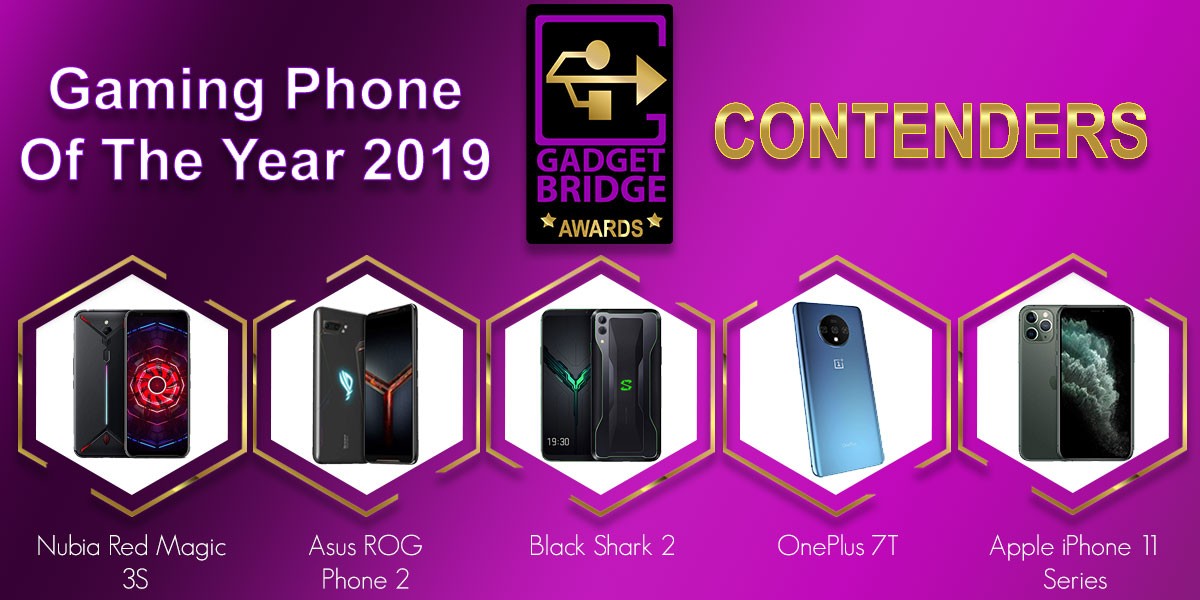 Mid-range smartphone of the year 2019

About 700 days ago the mid-range section of smartphones was ruled by Sony and LG. Now they are nowhere to be seen and the fight has been left to these contenders. 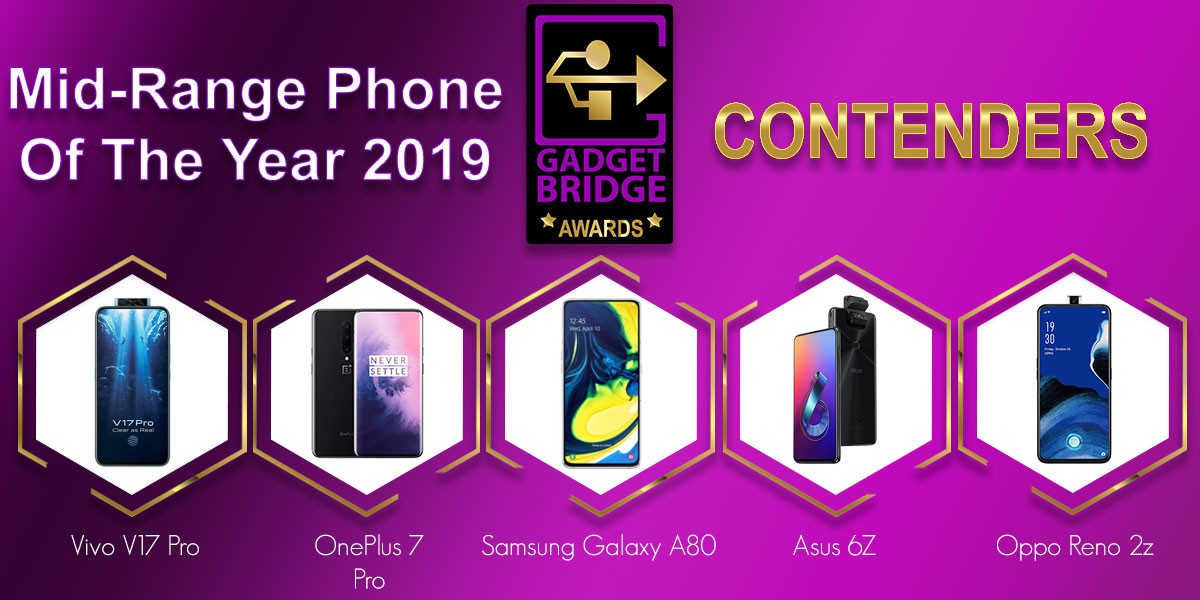 People’s choice smartphone of the year 2019

Now, this is where you get to Participate, Vote and Win! Vote for the People’s Choice Awards 2019. Or go to our Twitter posts here and here to vote. Don’t forget to retweet, leave a comment and add the hashtag #GadgetBridgeAwards. 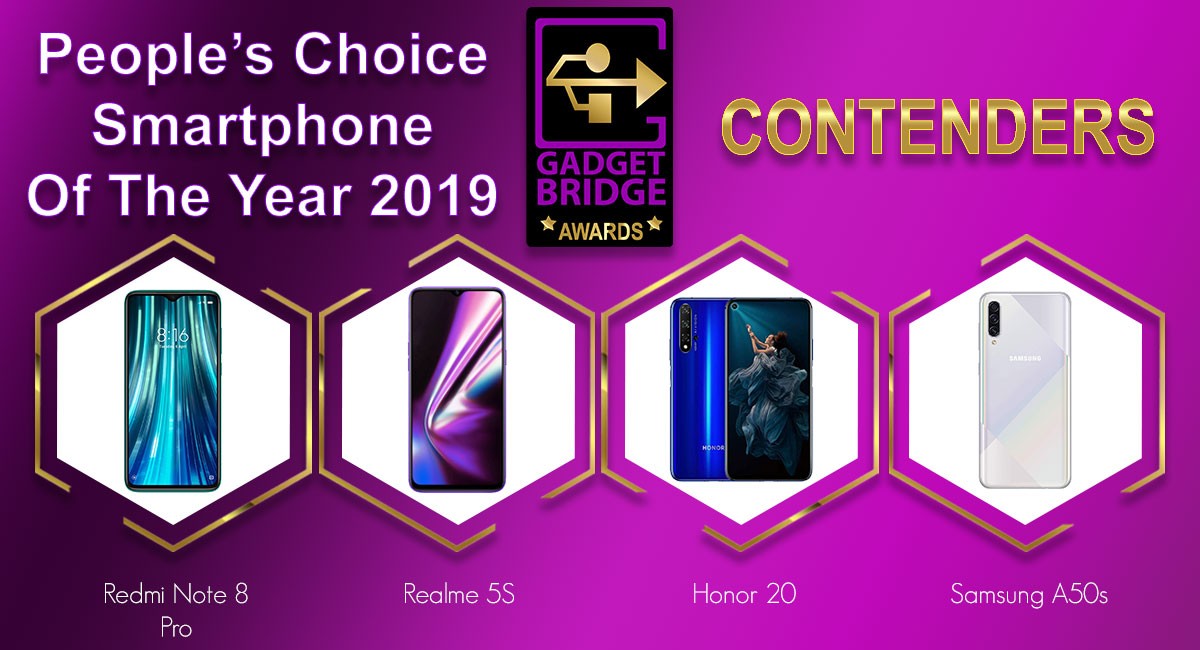 People’s choice gadget of the year 2019

Another category where we need your help! Pick your favourite from these. Go ahead and vote for the People’s Choice Awards 2019. Or go to our Twitter posts here and here to vote. Don’t forget to retweet, leave a comment & add the tag #GadgetBridgeAwards. 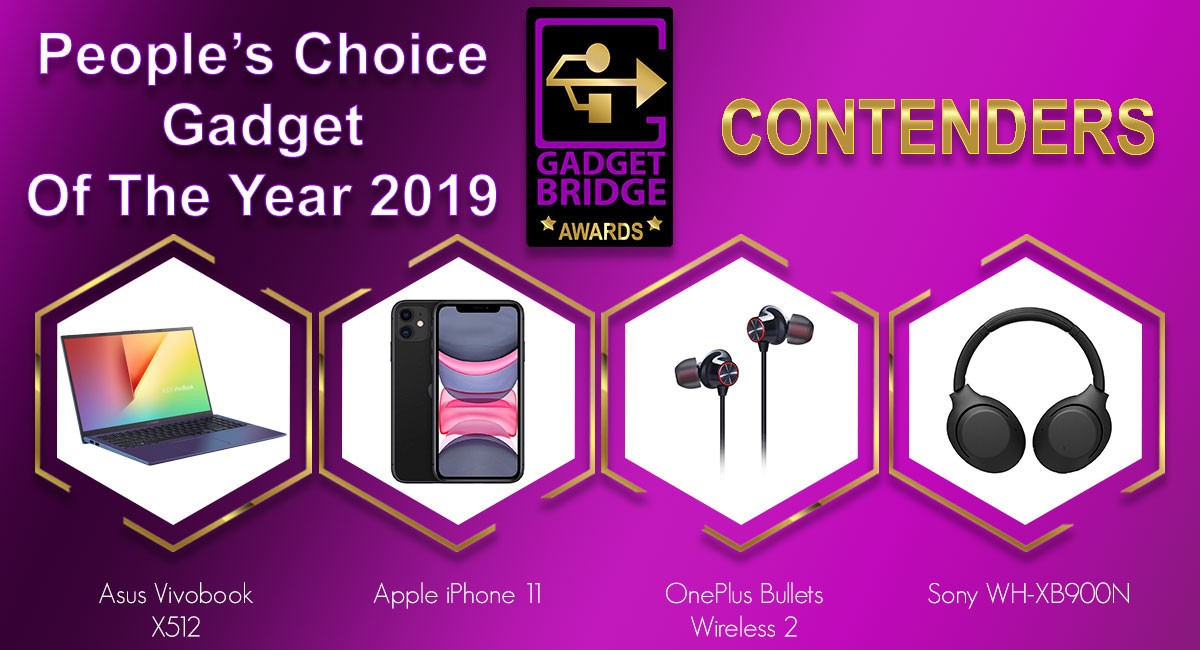 One of these fabulous gadgets will get the crown of being the best gadget of 2019, can you guess which one?

These gadgets are not like the usual run-of-the-mill gadgets. This is the ‘Hatke’ category when it comes to design. 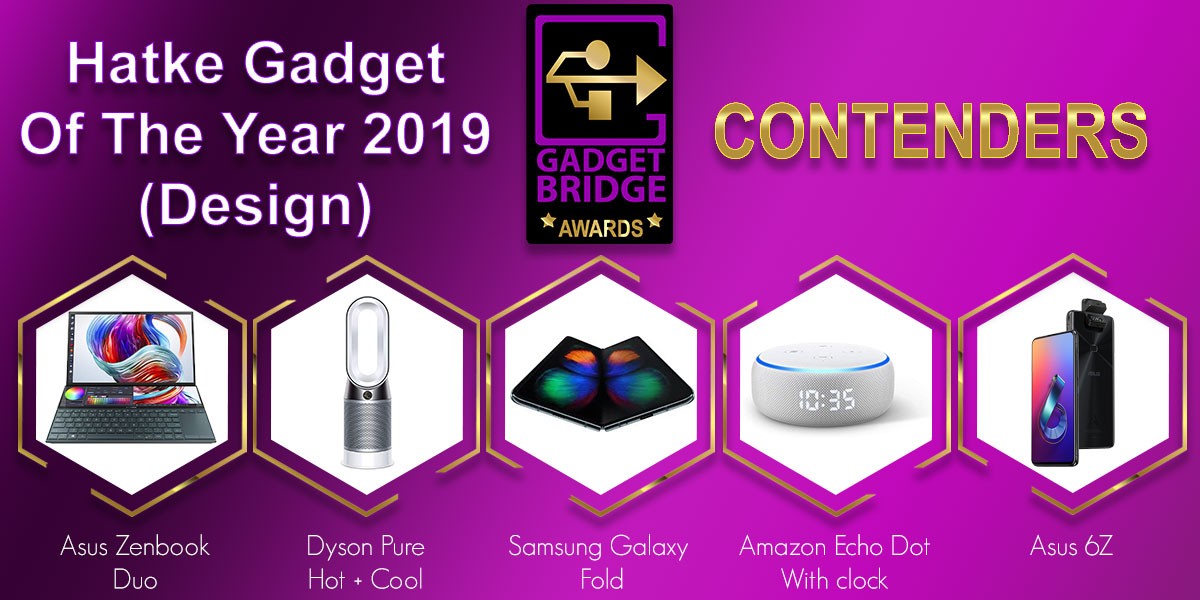 This is the ‘Hatke’ award category when it comes to the performance and utility of a device. 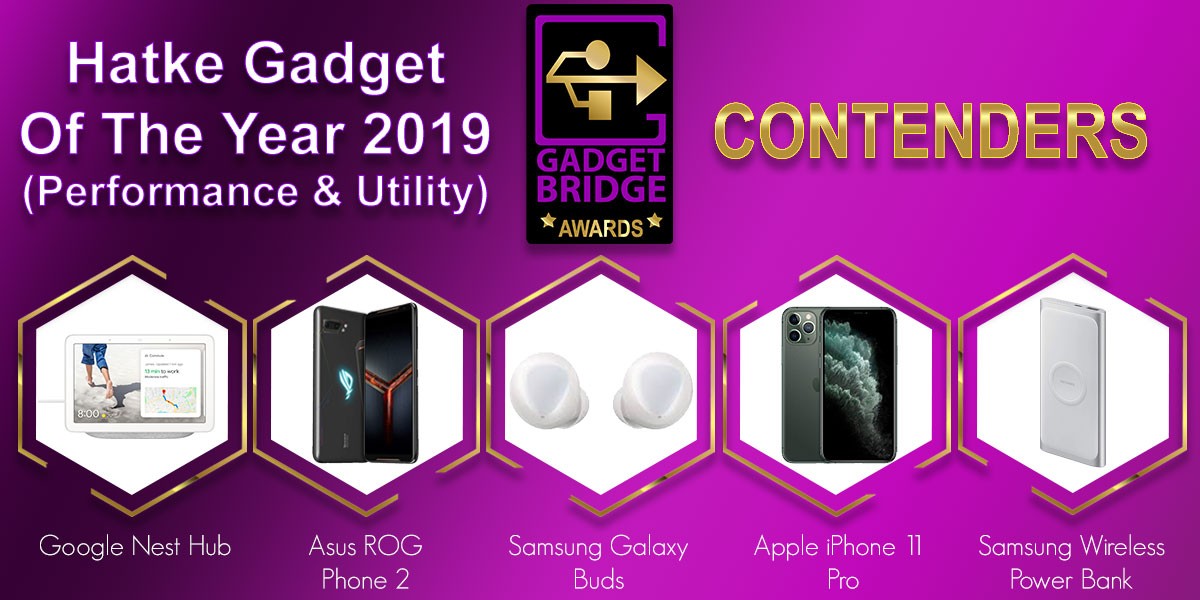 As much as the smartphone has tried to replace them it still can’t. These are the second most used gadgets along with TVs. Here are the top 4 in the running. 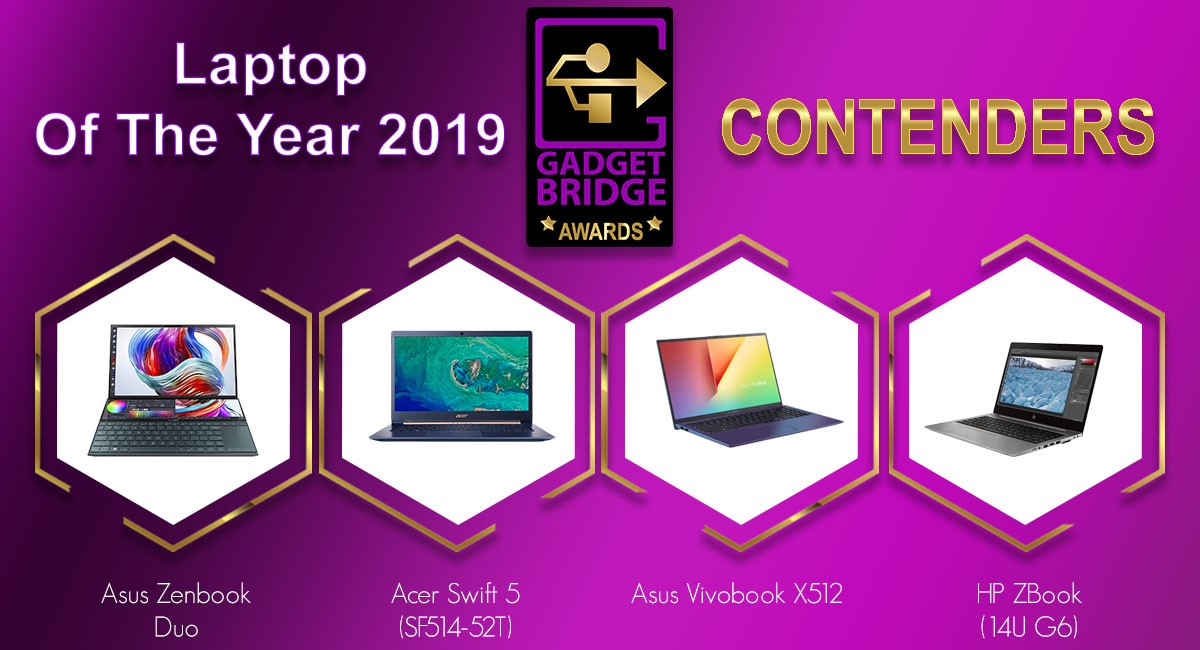 Gaming laptop of the year 2019

The gaming laptop arena was on fire this year. We have some solid nominees running for the top spot. 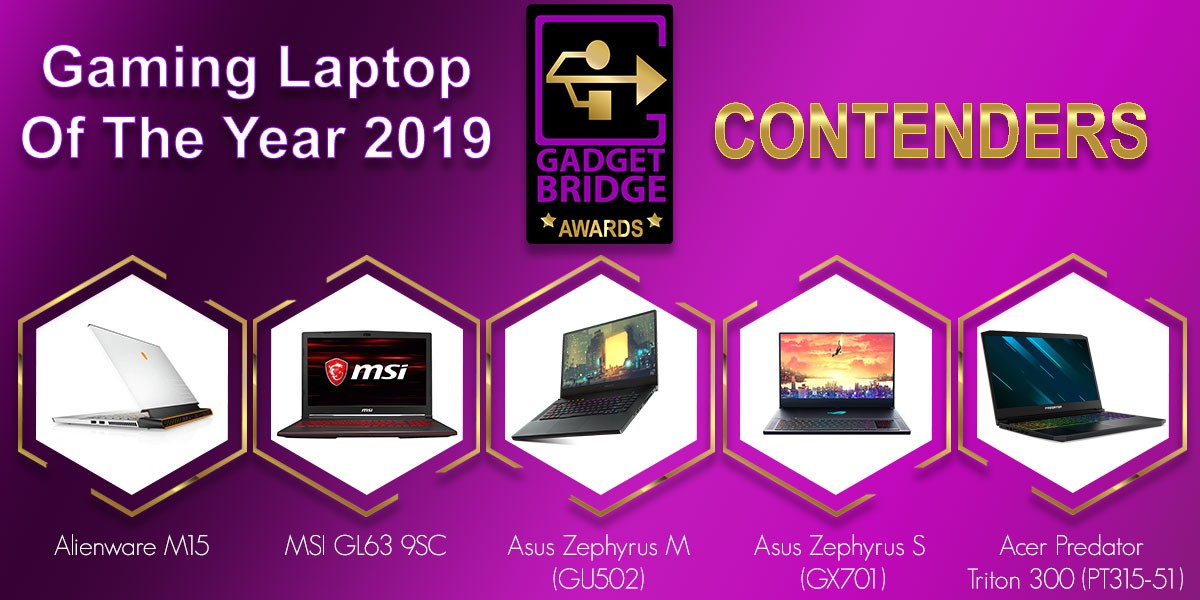 Some might say they do not need them, but these machines are still useful thanks to the portability and quick action mechanics. 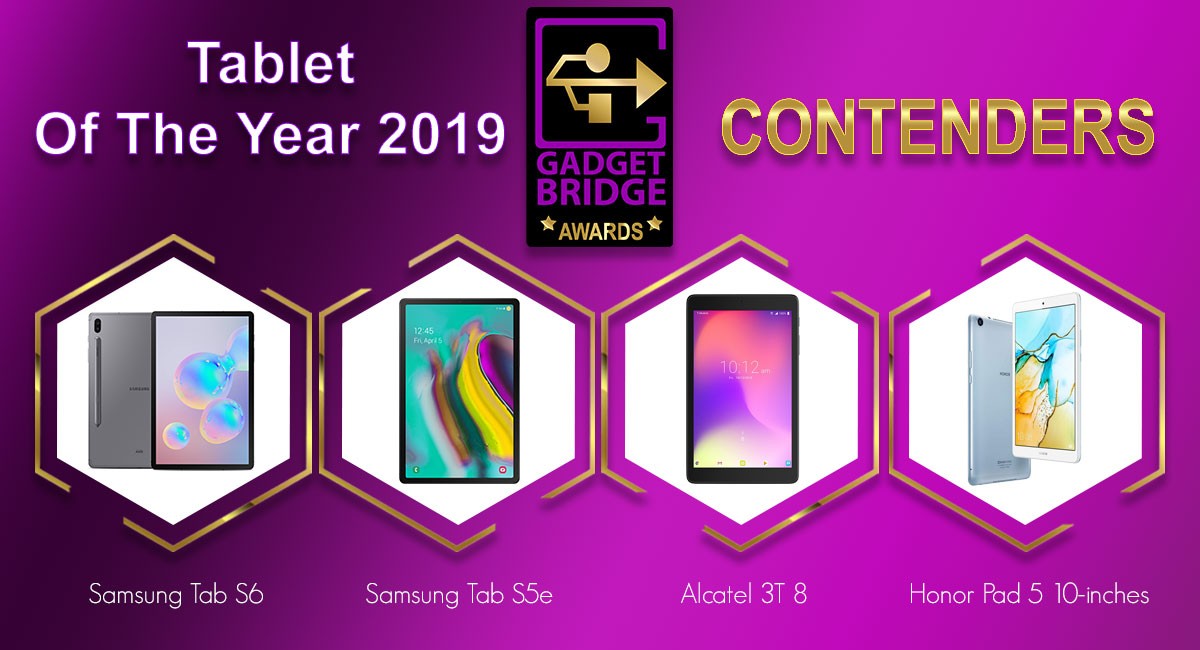 The idiot box is not-so-idiot nowadays. We have seen them become thinner and smarter in the last decade and this year was no different. Here are the top from the year 2019. 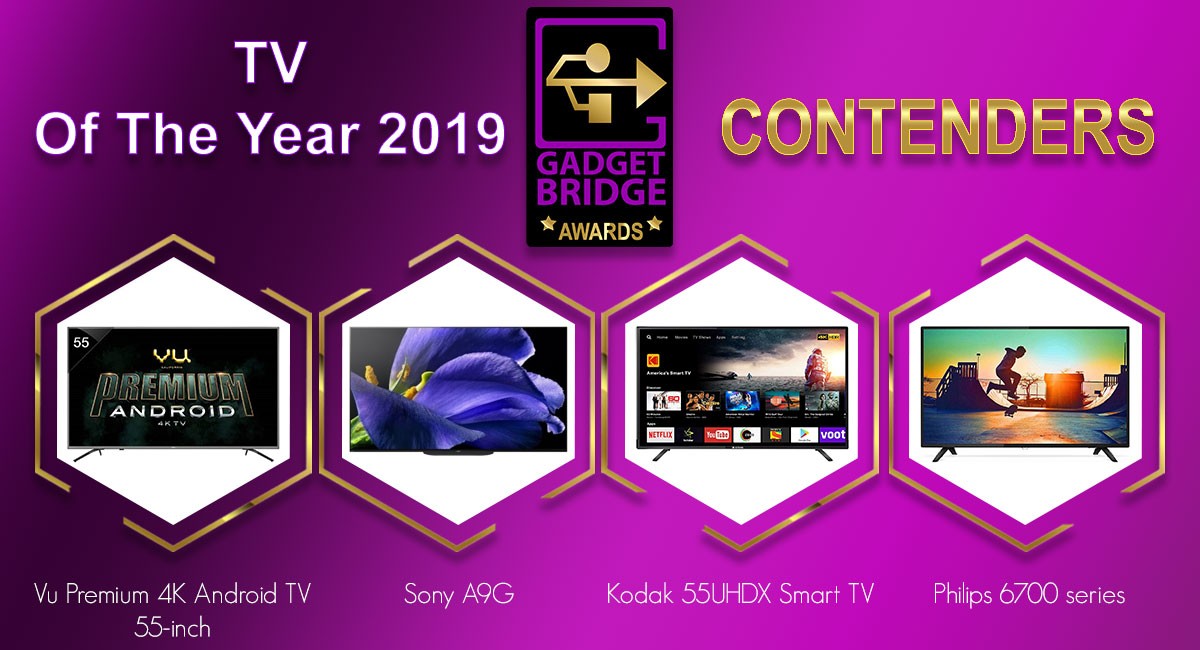 These are some of the best devices that make our homes more comfortable. 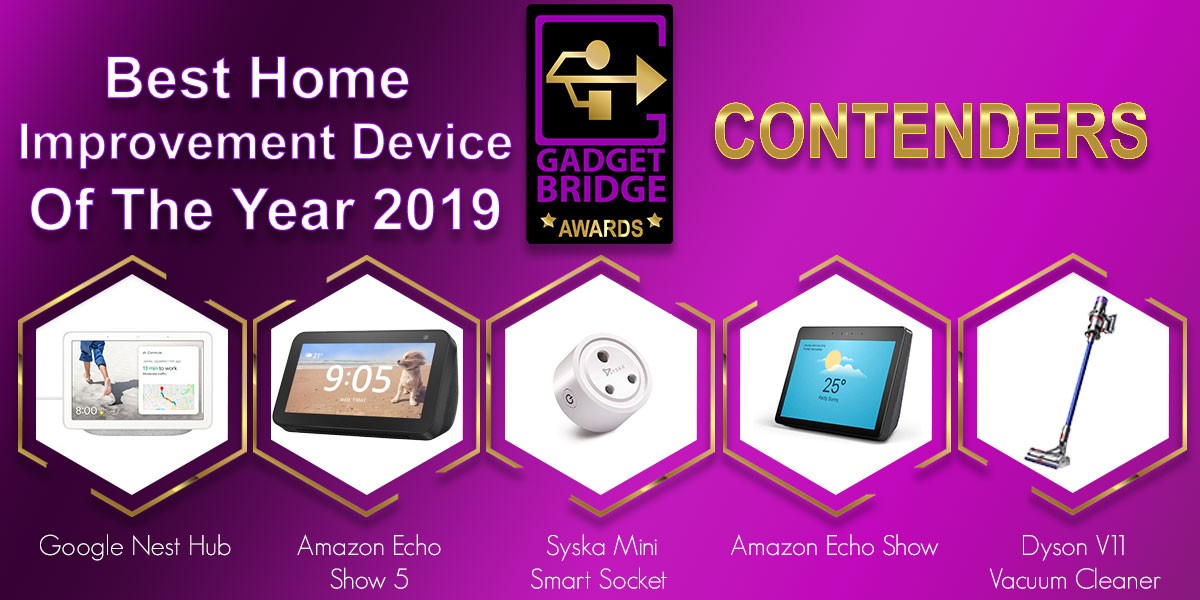 Smartwatch of the year 2019

What a smartwatch friendly year 2019 turned out to be. We saw some superb devices being launched this year. 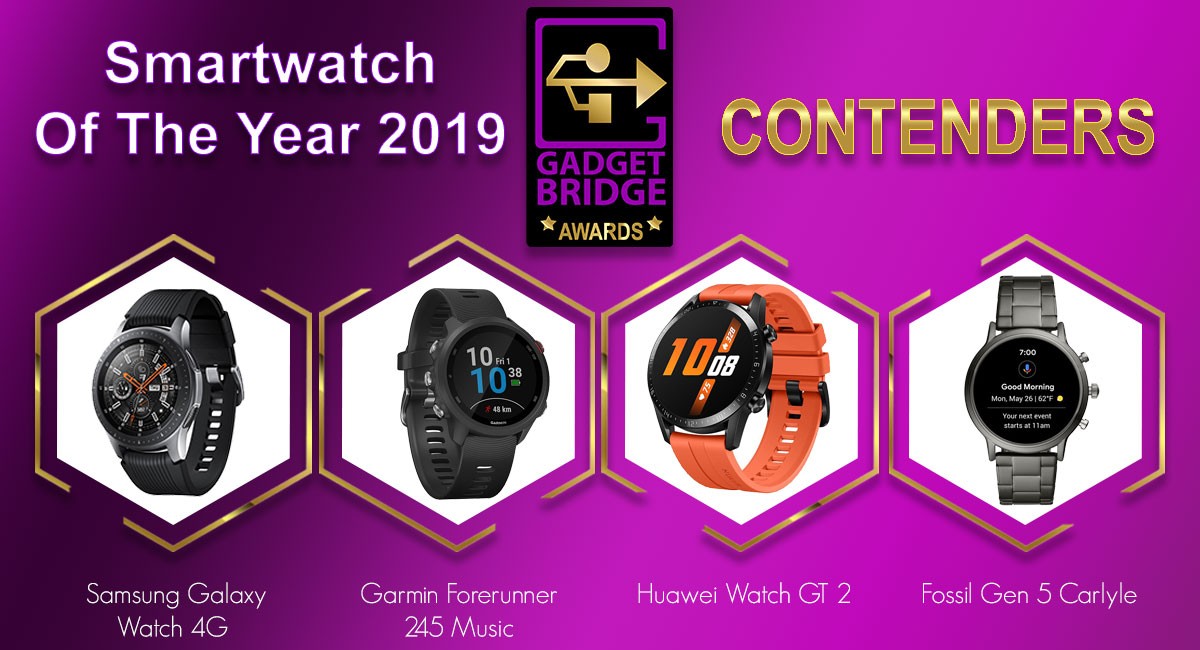 Fitness wearable of the year 2019

These help you stay healthy all the time. In 2019, these wearables were available dime a dozen. However, only a handful are worthy of buying. 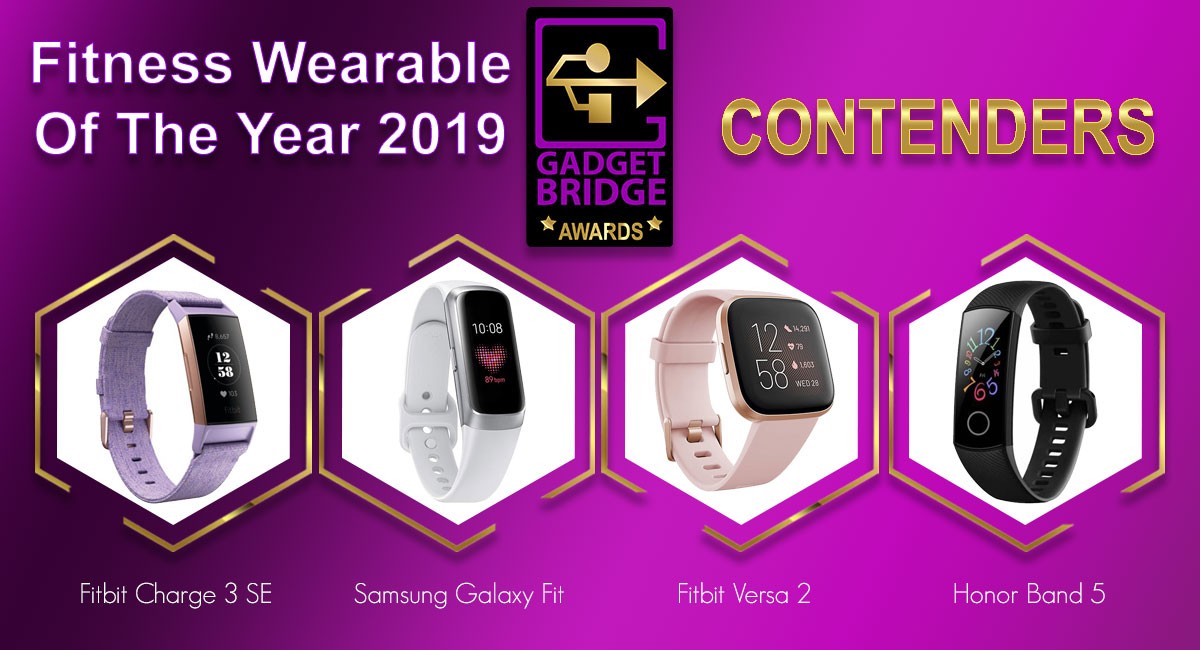 Headphones of the year 2019

The ever lovely headphones have become better in every sense in 2019. Some of the best came to life and here are the top picks. 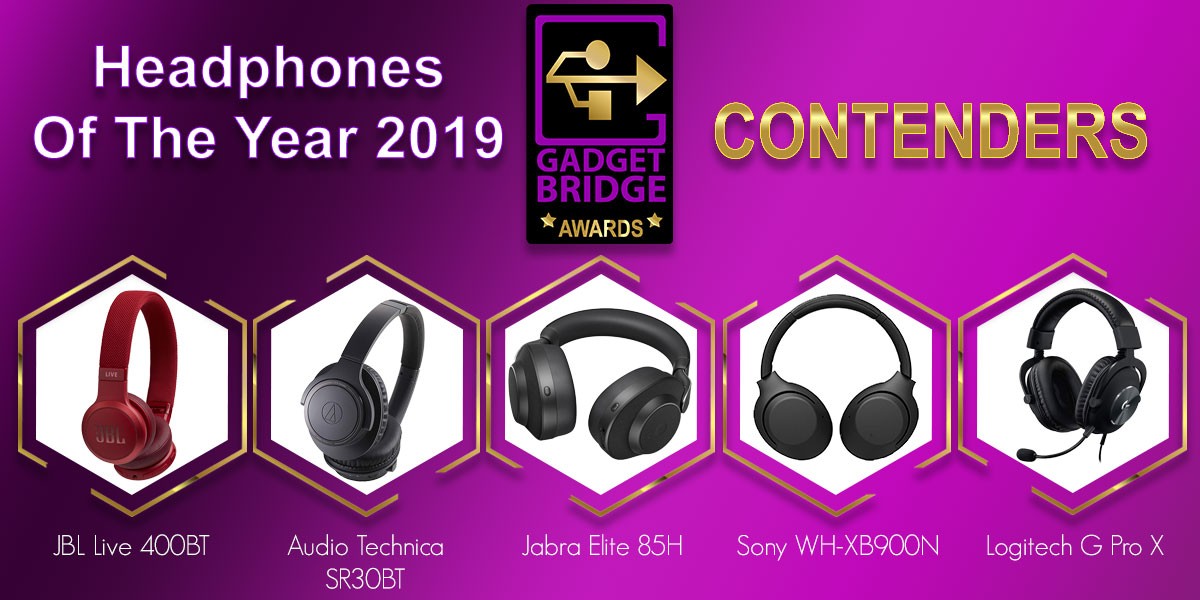 Bluetooth speaker of the year 2019

Some great launches this year, here are the top ones in the Bluetooth wireless speaker category of 2019. 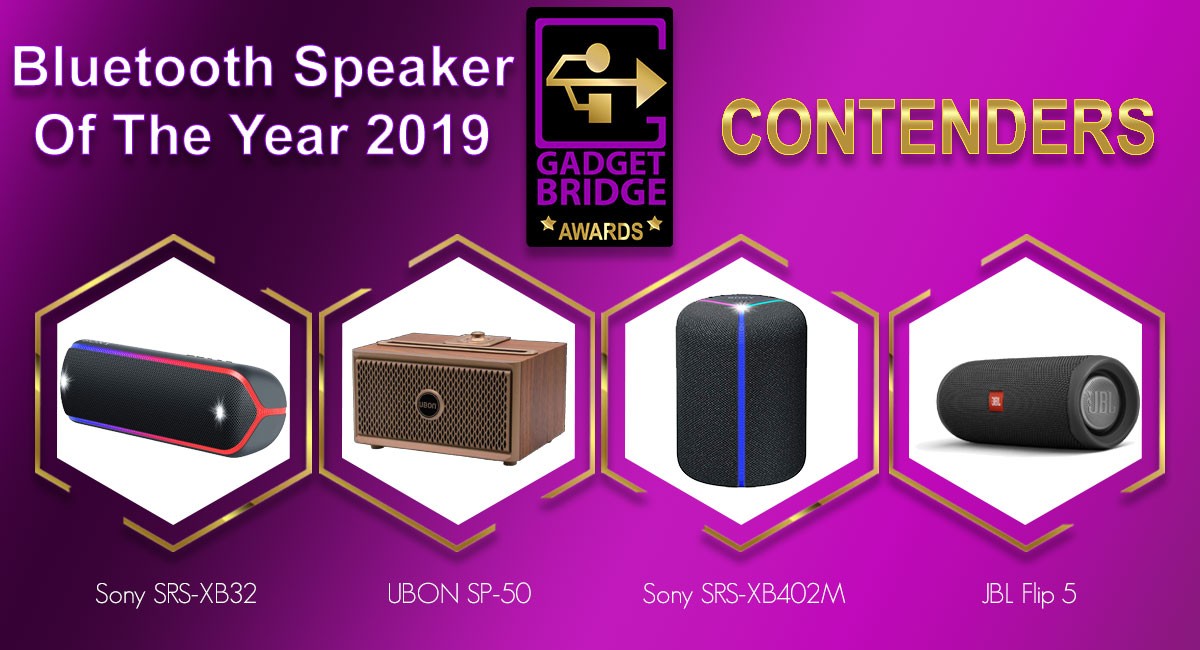 We absolutely loved how the sub 25 lakh car category erupted this year. A lot of SUV/MUV’s came out of the shadows to show their full might. Here are the top ones and we kind of have a hint which could be the winner. 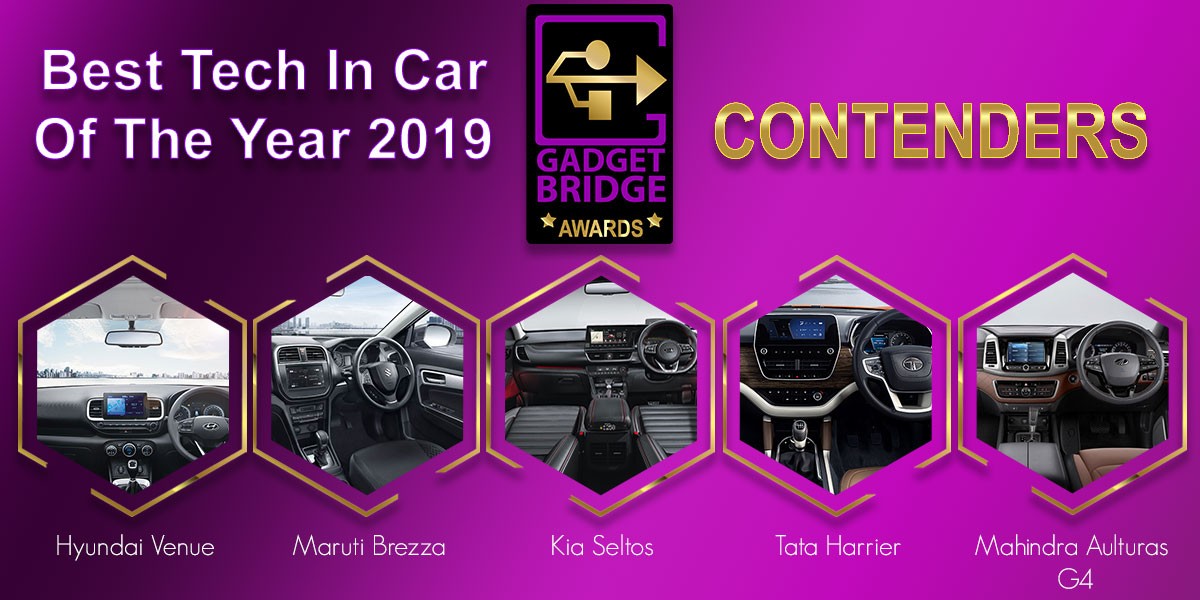 Streaming service of the year 2019

The cable TV is on the backfoot and Millenials are consuming more shows on the net. These are the best streaming services we came across this year. Which one will make it to the top of the podium? Just wait for a few days. 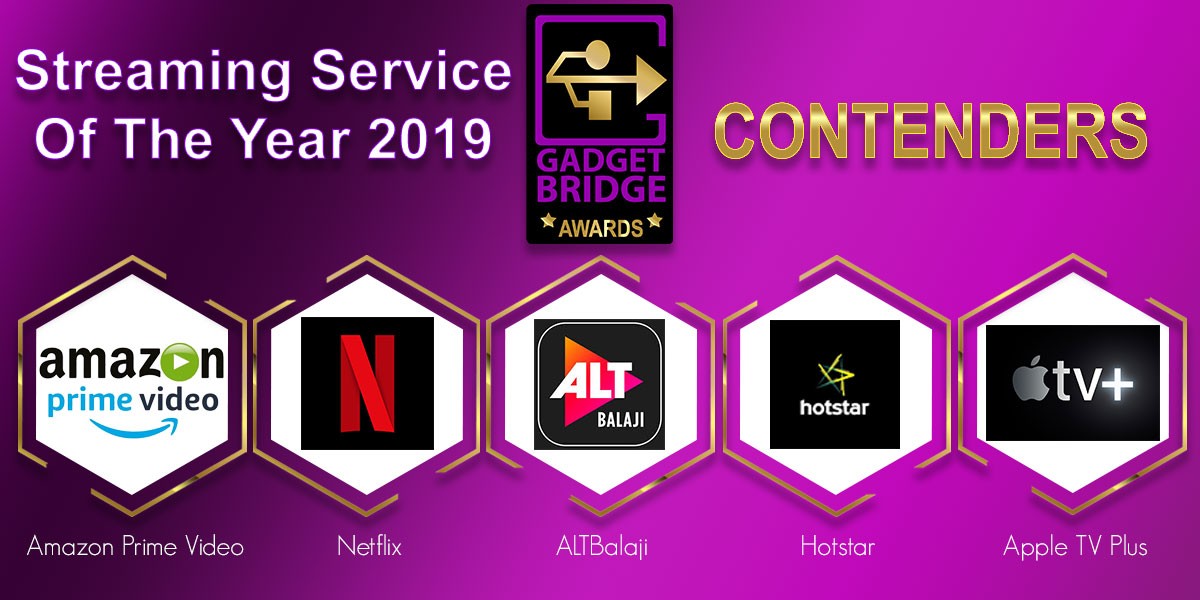 Gadget of the decade

It is the turn of the decade and these are the best we saw in the last ten years. What comes out on top? The answer is right around the corner. 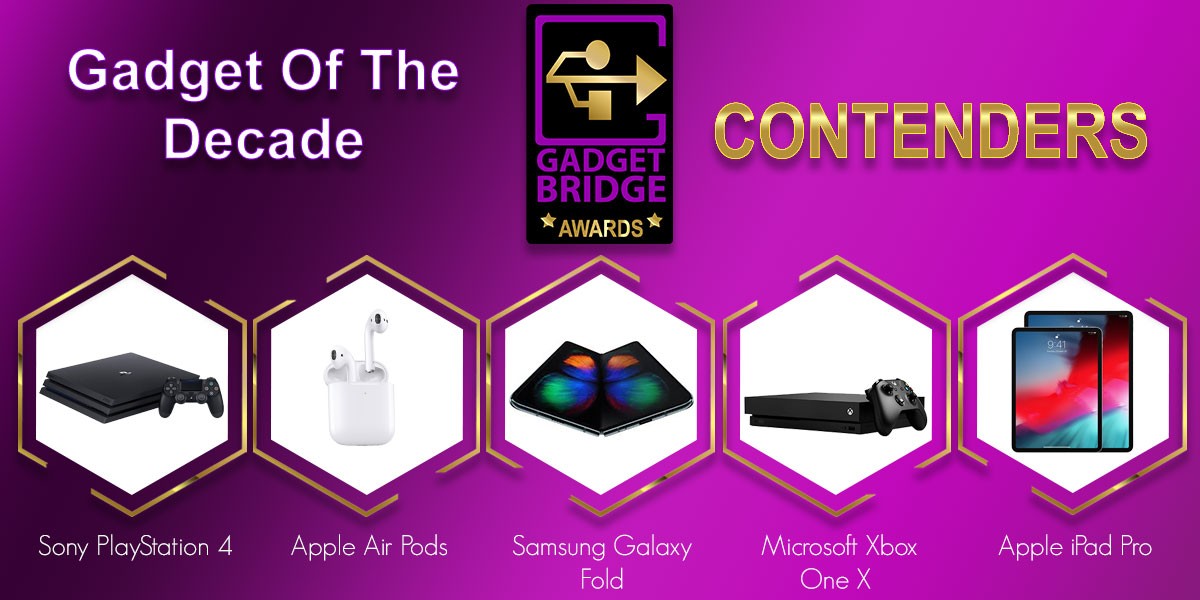 Sulabh Purihttp://www.gadgetbridge.com
Sulabh Puri is the Editor In Chief of GadgetBridge.com. A content specialist, he started his career young and it has been a rewarding 15 years for him. Before heading Gadget Bridge, he was the Editor of Times of India (TOI) Technology and GadgetsNow.com. He has also led TOI’s international edit arm as the Editorial Head of Business Insider India and Tech Radar India. He has also worked with various media houses such as the India Today Group and Cybermedia. He loves everything ‘gadgety’ and enjoys tinkering with new tech toys and automobiles. A graduate in commerce from Delhi University, he is also an adept graphic designer. When he is not working, he can be found in the kitchen, cooking mouth-watering chocolate cakes and croissants.
Facebook
Twitter
WhatsApp
Linkedin
ReddIt
Email
Previous articleA Comparison between the Redmi K30 and the Redmi K20
Next articleXiaomi becomes the most loved Smart TV brand in Q3 2019